The ASRAD-R is a vehicle-integrated air-defence missile system designed and produced by Saab Dynamics of Skandinavia in cooperation with Rheinmetall Defence Electronics in Germany. ASRAD-R uses the same unjammable laser guidance and the same missile – the BOLIDE – as the combat-proven RBS 70 system.

On any vehicle[edit | edit source]

ASRAD-R is a platform-mounted air-defence system, for integration with almost any wheeled or tracked fighting vehicle. The weapon platform, which can be remotely controlled at distances of up to 100 m, can also be containerised or pallet mounted.

The complete platform can be folded and lowered into the vehicle during transport. In the folded transport position the platform, which in some applications almost approaches stealth protection, can be protected against fragments. The low profile of the vehicle and folded platform allows ASRAD-R to be carried by most transport aircraft.

An ASRAD-R unit can be deployed and ready for missile launch a few seconds after quickly coming to a halt. Each firing unit is equipped with four ready-to-fire missiles and is completely reloaded in < 1 min.

In a fully autonomous fire unit, a radar with an integrated IFF system, or an IRST, is mounted on the top. The radar can also be installed on a separate vehicle to operate together with a number of fire units.

The gyro-stabilised sight is made up of a flexible sensor package with a thermal-imaging system and a laser-beam transmitter unit. Optional sensors are a TV camera and laser rangefinder.

With the new BOLIDE missile, the ASRAD-R system can overcome all targets, including armoured ground targets. The unjammable laser-beam guidance provides short reaction times and head-on capability with high accuracy and high kill probability at long range, down to the lowest possible altitude (ground level). With the laser beam-riding BOLIDE missile, this provides true all-target capability with an intercept range of 8,000 m and an altitude coverage of 5,000 m.

Due to the large effective-protected area and short re-engagement time, one firing unit can effectively engage multiple targets in a flight formation, before the enemy has time to employ their weapons.

The numbers of ASRAD-R units in a battery are flexible; however each ASRAD-R battery is normally configured with three to four ASRAD-R firing units. 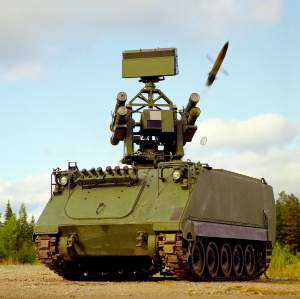 In order to successfully meet existing and future threat scenarios, the ASRAD-R system is designed for the following requirements:

The ASRAD-R is an autonomous unit and, targets are tracked by the HARD 3D radar and presented to the operator on the digital interface. Alternatively the ASRAD-R units can get target data from a central surveillance radar and / or command post or network, for coordination of the firing units. The ASRAD-R has a built in TEWA system for effective target selection in combat situations.

Retrieved from "https://wiki.conworlds.org/w/index.php?title=ASRAD-R&oldid=34024"
Categories:
Hidden category:
Cookies help us deliver our services. By using our services, you agree to our use of cookies.