Commonwealth of the Greater United States of America

Formation and Expansion of the Greater Commonwealth[edit | edit source]

Ukraine, Moldova, Belarus, and the Baltic states were next to join on September 15th, 3 months after Kosovo joins.

The United States has an extremely diverse climate with climates ranging from continental in the Northwest region, Arctic in Greenland, Iceland, and Northern Canada, tropical in Indonesia, Brazil, and the Caribbean, hot and arid in North Africa and the Middle East and Australia. The highest temperature is about 58.5 °C (137.3 °F) in San Luis Rio Colorado in Sonora on July 6th, 1966, the lowest is −69.4 °C (−92.9 °F) in Klinck station, Greenland on December 22, 1993. Winter temperatures can range from -45 °C (-49 °F) in the Greenland ice sheet to more than 30 °C in parts of Africa and Australia, summer temps range from -10 °C (14 °F) in Greenland ice sheet to nearly 50 °C (122 °F) in the deserts of Africa. The rainiest place is Lopez de Micay, Colombia with an average annual rainfall of 15,992 millimetres (629.61 inches), the rainiest month alone is December at 2,011 millimetres (79.17 inches). The snowiest place is Sukayu Onsen, Japan at 1,764 centimetres (694.5 inches), there has been some claims there are mountains that can have snowfalls over 3,000 centimetres (1,181 inches).

The United States has a very diverse terrain with high mountains and steep hills in any region, flatlands in Europe, valleys and canyons in any portion. The highest point is Mount Aconcagua in Argentina at 6,960 meters (22,835 feet), the lowest is at -428 meters (-1,404 feet) in the Dead Sea in Israel, The longest river is the Amazon River at a length of 6,575 kilometers (4,086 miles), The largest lake is still Lake Superior with an area of 82,100 km2 and a volume of 12,100 km3, the deepest lake is the Great Slave Lake in Northwest Territories at 614 meters.

The population according to the Commonwealth Census is 2,984,429,851 people. This means it is the most populous country in the world, The United States is the top destination for international migrants, most of these migrants come from China, India, Russia, Iran, and Italy. Chinese immigrants will be the biggest migrants to the United States usually ending up in the Asia/Pacific and North-Western regions.

The largest cities are Tokyo, Sao Paulo, Mexico City, Cairo, and Osaka. Tokyo is the largest at 37.4 million people. The most populous states are Indonesia, which will now be the most populous subdivision of any country, Nigeria, Mexico, Japan, and the Philippines. Indonesia will probably near 300 million.

Children in the United States usually start school at three or four years old, The United States has an average expected and mean schooling years of 14.0 and 9.4 years respectively, Children in Africa and the Middle East do not have proper access to education and suffer from very low literacy rates.

• Executive: This branch has the power to veto bills before they become a law 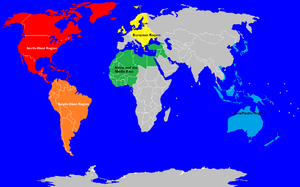 The GDP of the United States is $54,306,417,200,000. This is about 65% of the total Gross domestic product on Earth. The United States has a GDP per capita of $18,320, the 14th highest in the world in that case. The United States has a relatively high income inequality index of 44.4 on the Gini coefficient scale. The unemployment rate is 13.5%, unemployment is highest is 31% in Africa and the Middle East. The national poverty rate, or where people live under $5.60 a day is 34.4%. Poverty is highest in Africa and the Middle East

Retrieved from "https://wiki.conworlds.org/w/index.php?title=Commonwealth_of_the_Greater_United_States_of_America&oldid=50637"
Category:
Hidden category:
Cookies help us deliver our services. By using our services, you agree to our use of cookies.