Visby Class Stealth Missile Corvette were designed to be the main Sjøforsvaret's element for coastal water operations. The ship's design heavily emphasizes low visibility, radar cross-section and infrared signature as well as high speed and maneuverability. The first ship in the class is named after Visby, the main city on the island of Gotland. In 2020 there are 20 ships in service and 2 more under construction. The first 12 units were built by Kockums, while the following ones were built by NAtech Marine after acquiring the surface ship business of the former Kockums.

Visby Class were the first Sjøforsvaret's ships to be equiped with TERMA C-Flex Combat Management System. C-Flex is basen on open system architecture and is able to integrate the Saab 9LV FCS Fire Control System and Saab EOS 500 Electro Optical Fire Control. The system is completed with a TERMA SCANTER 4100 Surveillance Radar and a modified Kongsberg C-Scope Sonar System.

The propulsion system is fully electrical with two NAtech Marine hydrojets mounted externally to the main hull. The electricity for the motors is supplied by the power system. The ship has rudders and bowthrusters for harbour manoeuvring. 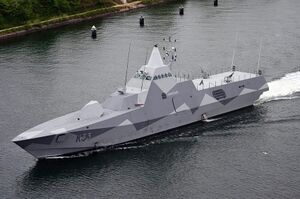 Retrieved from "https://wiki.conworlds.org/w/index.php?title=Visby_Class&oldid=34653"
Categories:
Cookies help us deliver our services. By using our services, you agree to our use of cookies.