The 1858 Sierran federal election was the first federal election. It was held from Saturday, November 27, 1858 to Thursday, December 16, 1858. It was the first parliamentary elections in the nation, following the ratification of the new Constitution and promulgation of the Monarchy. It was held to elect both senators and members of Parliament to represent the provinces and their parliamentary districts. The purpose of the elections was to replace the First Sierran Parliament's seats, which consisted of temporarily assigned members from the previous Californian Congress who pledged to remain independents during the provisional period following the Constitution's ratification.

Under the California Republic, the country was governed as a presidential republic that had a total of seven presidencies across the span of just over a decade. Although the Californian government and its electoral processes were modeled after the United States government, the Republic was rife in corruption, insolvency, and factionalism.

The Constitution reorganized the country into a hybridized form of Westminster-style parliamentary system with Anglo-American federal republican elements. The executive and legislative powers were fused in the House of Commons with the head of government as the Prime Minister. Each province received equal representation in the Senate (3 senators) and proportional representation in the House based on population. Provinces were allowed to determine how its senators were elected while House members were elected by popular vote. During the election, all of the original 11 provinces of Sierra agreed to appoint their senators based on the popular vote results for their House members, rather than hold direct elections for the seats.

Prior to the election and swearing-in of Frederick Bachelor, Sr., King Charles I served as the interim prime minister. Bachelor, Sr. was one of the king's closest confidants and leading supporters during the California Constitutional Convention of 1857. He was an ardent monarchist and was the founder and leader of the Royalist Party. He secured a majority of seats in both houses of Parliament for his party through his ambitious campaigning in San Francisco where the majority of Sierrans lived.

The Democratic-Republicans, led by Ulysses Perry, ran on a platform advocating republicanism and agrarian politics. It was the largest opposition party in Sierra at the time and became a longstanding rival to the Royalists. The party gained a foothold in the Styxie which was more insular, rural, and agricultural-based than the Royalist-dominated coast.

Other parties such as the Farmer Union, Federalists, and the Whigs were unable to qualify for the ballot as none were able to meet the country's early membership threshold requirements. As a result, the election was the single instance in Sierran history when only two parties contested in the federal elections and were represented in the House afterwards. The dominance of the two leading parties in the election would remain an unchanged reality for Sierran federal politics until 1919 with the election of the Reformed Republicans. 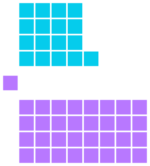