The 1865 Sierran federal election was the third federal election to be held after the 1858 Constitution's ratification. The third Sierran Parliament was dissolved on August 22, 1863 after the House passed a motion of no confidence in the Royalist government under Frederick Bachelor, Sr. The election was held from September 1 to October 16, 1865 to elect members of the House of Commons of the 4th Sierran Parliament. Although the incumbent Royalists maintained a majority over the House, the incumbent Bachelor, Sr. resigned and was replaced by his deputy, Richard Trist. The election reflected the second election where the Royalists suffered seat losses while both the Democratic-Republicans and Whigs made gains. The Democratic-Republicans' rise towards a majority coincided increased voter participation by Sierra's working-class and citizens from the Styxie provinces.

In the summer of 1865, San Francisco factory workers led a strike that resulted in government crackdown against strikers. The crackdown, which became known as the Union Square affair, resulted in over 45 arrested and 12 dead. Moderate Royalists who were sympathetic to the grievances of workers, known as Pauperheads, came under increasing pressure by their own constituents to oppose the government's policies and actions towards labor unions. Party leaders and whips sought to control and censure the Pauperheads, forcing them to side with the opposition and thereby triggering a motion of no confidence. The friction between the Pauperheads and the Royalist leadership resulted in the party running their own handpicked candidates in the Pauperheads' districts, a move that established the precedent of political parties selecting and endorsing their own candidates, rather than individuals filing to contest on their own. Bachelor, Sr. requested the King to dissolve the Parliament in preparation of new elections, but decided to resign after serving nearly 7 years as prime minister. His resignation following a motion of no confidence set a precedent that most prime ministers have since followed. In the wake of Bachelor Sr.'s resignation, he was replaced by his deputy, Richard Trist, who led the Royalists in the election and won. The electoral results were hotly contested by the Democratic-Republican opposition which accused of the Royalists of electoral fraud for stuffing the ballots in key precincts with illegitimate votes and discarding Democratic-Republican casted votes. 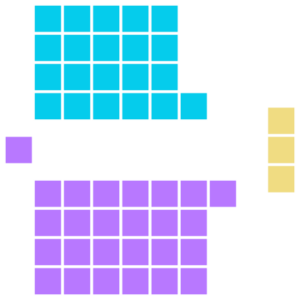