The 2008 Sierran federal election was held on Friday, March 14, 2008. The Democratic-Republican Party, under Steven Hong, had been in the official opposition, but had secured over twenty seats and became the largest party in government and eventually formed a coalition government known as the Progressive Coalition and defeated the governing Royalist and Federalist Party under the leadership of Diana Jeong the latter of whom resigned as party leader after her party's defeat in the election. The Social Democrats and Green Party both made major gains and were able to help form a strong coalition government in parliament against the Royalists and their allies in the Libertarian Party, the latter of which lost four seats. The Christian Democratic Party under Carmelo Murphy, the most recently party in Sierra at the time, had retained a small presence in parliament, but Murphy was defeated and later triggered a leadership election later that year.

All 276 seats in the House of Commons were up for election along with 21 out of the 77 regular seats in the Senate and ended with the Democratic-Republicans scoring major electoral victories and the Progressive Coalition being the largest governing alliance in both chambers of parliament. The election was notably tense as it came five years after Sierra had participated in the 2003 invasion of Iraq along with most other member nations of the Conference of American States. Jeong and the Royalist Party defended Sierran involvement in the Iraq War while the Democratic-Republicans campaigned against it along with the Social Democrats and the Greens. The Libertarians were divided on the issue while the Christian Democrats were mostly united in opposing the war. Many analysts claimed that the divided state of the Sierran political right had paved the way for Hong's victory. Another major issue was the financial crisis that had plagued the Sierran economy and lead to high unemployment with Jeong and the Royalists being criticized for their handling of the crisis.

Following the election's conclusion, the 75th parliament was formed with a Democratic-Republican-led government and Jeong's resignation would trigger a leadership election that concluded with Evan Hutchison succeeding her as Leader of the Royalist Party until 2012 when he was succeeded by Daniel McComb. The Social Democrats and Greens would see improvements in their showing in parliament while the Libertarians only suffered minor losses before making significant gains in the future 2013 and 2016 federal elections. The Christina Democrats would maintain a presence in parliament, but would lose it in the next election.

Following the September 11 attacks by terrorists linked with Al-Qaeda, the Conference of American States declared a "war on terror" and would lead to the CAS invasion of Pashtunistan leading to the ongoing War in Pashtunistan which Sierra participated in. Two years later in 2003, Iraqi dictator Saddam Hussein was accused of harboring terrorists and supporting Al-Qaeda and the 9/11 attacks and possessing weapons of mass destruction. By 2008, the war had become divisive and unpopular amongst much of the Sierran population and both Jeong and the Royalist-led government were heavily criticized for the war which was denounced as an illegal offensive war by then-Leader of the Opposition Steven Hong and most of the Democratic-Republican Party. Hong had accused Jeong of dragging the CAS into an illegal war and many of his constituents and Dem-Rep MPs were also denouncing her as a war criminal. Jeong still had support from within the Royalist Party, but her approval rating nationwide was declining along with that of the Royalists.

Opposition to the Iraq War in Sierra was largely lead by the Democratic-Republicans, but both the Social Democrats and Green Party had taken major roles in leading the anti-war movement and would use grass-roots efforts to help mobilize voters to support the parties taking advantage of high anti-war sentiment. Jeong and the Royalists would defend Sierran involvement in the war, but faced heavy scrutiny and their allies in the Libertarian Party would be divided on the issue. Libertarian Party leader Daniel Wood had stated his intent to remain loyal to the Royalist government arguing that it was a necessity for right-leaning Sierran voters in spite of his personal opposition towards the war.

The 2008 financial crisis had deeply effected Sierra and lead to high levels of unemployment. In response to the crisis, Jeong and the Royalists announced bailouts for various major multi-national companies, banks and financial institutions to shore up the struggling the economy. The move was met with polarizing reactions as many citizens, especially young voters, had criticized the move and accused the government of appeasing wealthy donors and prioritizing the interests of wealthy elites over regular citizens. Hong criticized the move as well and lead the opposition in parliament. During this period, Jeong and the Royalists had been trying to privatize the Royal Postal Service with Royalist MP Robert McQuire leading the effort in parliament with the proposed Postal Innovation Act of 2008 which sought to privatize the RPS, but it failed due to a filibuster by Hong and killed the bill. Both moves had lead to increased support for the Democratic-Republicans and the call for a new more progressive government to take over.

2008 was a period of major tension and controversy over social issues in Sierra especially in regards to LGBT+ and reproductive rights. In February of 2008 the province of San Francisco legalized same-sex marriage and same-sex civil unions were also legalized in the nearby province of Santa Clara. In response to both moves and protests for legalizing same-sex marriage in San Joaquin, conservative provinces such as Kings and Orange had attempted to declare marriage between a man and a woman and wanted to amend their provincial constitutions to do so. Moves were made, but failed due to a shortage of needed votes to pass said amendments. Jeong hd voiced support for such moves and endorsed politicians that opposed LGBT rights while Hong supported LGBT rights and assisted politicians running against Royalist politicians opposing same-sex marriage and rights. Hong commanded Hong and called her and the Royalist Party out for it during parliamentary sessions and campaigned on expanding and supporting LGBT rights on the campaign trial leading up to the election.

Around the same time, liberal provinces had also been loosening abortion laws during this time with Santa Clara passing the Reproductive Rights Act of 2008 which lifted many abortion restrictions previously imposed, a move that caused many conservative provinces to attempt to restrict abortion rights in their respective provinces. Jeong's home province of Orange had increased restrictions to 20 weeks in 2008 and Jeong promised to pass federal legislation restring abortion if she and her party retained their majority. Hong and the Democratic-Republicans along with the Social Democrats and Greens ran against this and promised to protect and expand reproductive rights with Hong denouncing Jeong as a "reproductive and social tyrant". 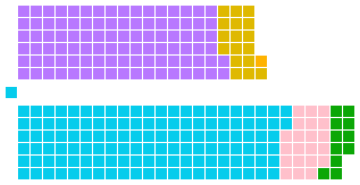