The COVID-19 pandemic, also known as the coronavirus pandemic, is an ongoing global pandemic of coronavirus disease 2019 (COVID-19) caused by SARS-CoV2 that was first identified in Wuhan, Hubei Province, China, after people developed pneumonia without a clear cause and for which existing vaccines or treatments were not effective. Cases of it have been confirmed in more than 20 other countries across Europe, North America, and the Asia-Pacific. The virus spreads through human-to-human transmission and its transmission rate (rate of infection) appeared to escalate in mid-January 2020, with several countries across Europe, North America and the Asia-Pacific reporting cases. The incubation period (time from exposure to developing symptoms) of the virus is between 2 and 14 days at which time the patient may appear asymptomatic. Symptoms may include fever, coughing, diarrhea, impaired kidney function, and breathing difficulties, and it can be fatal in more serious cases. There have been over 2,700 attributable deaths to the coronavirus although there have been more than 30,000 recoveries.

As of 26 February 2020, approximately 80,000 cases have been confirmed, including in every province of China. In response, cities with a combined population over 65 million people including Wuhan and 15 cities in the surrounding Hubei province were placed on full or partial lockdown, involving the termination of all urban public transport and outward transport by train, air and long-distance buses. Many New Year events and tourist attractions have been closed over fear of transmission, including parts of the Forbidden City in Beijing not used by the Qing government, traditional temple fairs, and other celebratory gatherings. It has surpassed in deaths of the 2003 SARS outbreak.

Since the virus spread from China to more than 20 other territories by 1 February 2020, many countries have imposed travel restrictions for Chinese nationals and cancelled all flights with China, while the Union of Sovereign States, Manchuria, and North Vietnam closed their land borders with China as well. Temperature checks at international ports of entry, travel advisories, and health declarations have been made by various governments. The outbreak has been declared a Public Health Emergency of International Concern (PHEIC) by the World Health Organization (WHO), explaining that its decision was based on the possible effects that the pathogen could have if it spreads to countries with weaker healthcare infrastructures. The declaration makes it the sixth time that the measure has been invoked since the H1N1 pandemic in 2009.

Misinformation and conspiracy theories regarding the outbreak has spread, primarily online, which the WHO described as an "infodemic". The infodemic has led concerns that the panic and fear surrounding such misinformation may leave a destabilizing effect on the global economy and increased incidences of xenophobia and racism. Political consequences have included a number of local and provincial leaders in Wuhan and Hubei being fired due to their response to the outbreak.

Most people who have contracted the disease have shown clinical symptoms, often described as flu-like symptom, such as fever, coughing, breathing difficulties, fatigue, and myalgia. More serious complications can lead to pneumonia, acute respiratory distress syndrome, sepsis, septic shock, and death. Upper respiratory syndromes, such as sneezing, nasal discharge, and sore throat is less common. Some infected patients are asymptomatic and show no visibly discernible or clinical signs of the disease despite testing positive for the disease.

The Hongxian Emperor held emergency meetings with government ministers on how to respond to the crisis and stop the virus in late January. The government was initially quiet and did not comment on the outbreak as it developed early on. On January 23, 2020, the Imperial Government put Wuhan and several nearby cities in Hubei Province under lock down, with a population of more than 70 million people. New Year holidays have been cancelled all over the country, and many tourist sites and other locations have other been closed to prevent the spread of the virus. On January 27, Imperial Prime Minister Lu Zhongwei and Minister of Health Zhai Kun arrived in Wuhan to personally coordinate the virus response and containment efforts. A central headquarters for the emergency response was established in Beijing, and Wuhan was essentially placed under martial law. As of February 2020, more than 30,000 medical personnel have been deployed to the central Chinese city at the epicentre of the outbreak. Other major cities across China also put restrictions on the public and travel throughout February, which affected approximately 500 million people. Many cities with confirmed cases have told people to remain inside their homes and only allow people to go outside to one or two times per week.

The Chinese Imperial Court stated that the situation is under control and the World Health Organization praised China's rapid response to the outbreak. The early 2020 Chinese legislative election, which was scheduled for January 31 earlier that month by the Emperor after proposed constitutional changes that were announced around New Year's, was postponed to an "unspecified future date" due to the outbreak of the virus as it would disrupt voting. Other public gatherings and events have also been temporarily suspended throughout the country.

While the government's comments on the situation have been limited, former Chinese War Minister Zhou Zhenhua caused controversy when he publicly speculated in an interview with the state media that he "would not rule out" the possibility of the virus being a Western biological weapon. He did not accuse any country specifically, but implied that the Anglo-American countries would stand to gain from internal chaos and economic disruptions in China.

Various Hainan and Taiwan media outlets reported that an unknown number of people were arrested by the Qing government for trying to spread information about the outbreak early on before it was publicly acknowledged by the authorities. 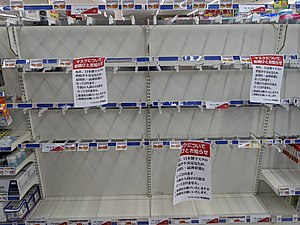 The Japanese government has launched measures designed to blunt the spread of the outbreak. Enhanced screening procedures have been established at all international ports of entry, and the Immigration Services Agency, an independent bureau of the Ministry of Justice, announced restrictions on entry for holders of Chinese passports from Hubei, Guangdong, and Zhejiang provinces or known to have travelled to those provinces with the past six months. Extreme pressure has been placed on the national health system as citizens concerned about the virus seek medical diagnosis. Supplies of face masks, in particular, have dwindled, with new shipments selling out nearly immediately. A British-owned cruise ship, the Diamond Princess, was quarantined on February 4, 2020 in the Port of Yokohama after several passengers tested positive for the virus. The total number of passengers onboard the Diamond Princess infected reached 542 people by February 18.

On January 31, 2020, the Sierran Ministry of Foreign Affairs issued an official travel advisory for Sierran nationals against making nonessential visits or travel to China and directed Sierran customs to temporarily deny entry to all foreign nationals at airports and other ports of entry who recently traveled to China within the past 3 months unless they were an immediate family member or relative of a K.S. national, a permanent resident, a university student, or a member of the inbound flight crew. The Royal Center for Disease Control and Prevention (RCDCP) warned K.S. citizens to exercise extreme precautions if they had recently traveled to Wuhan and the Hubei Province. It recommended those who have returned from mainland China and experienced flu-like symptoms or breathing issues to inform health professionals by phone ahead of time before seeking medical treatment. A charter flight of more than 300 Sierran diplomats and their family members were also flown to the March Air Reserve Base in Butterfield Valley, Inland Empire where they were placed under a mandatory two-week quarantine. After the RCDCP confirmed its eighth case of the novel coronavirus in the country, it released a statement emphasizing that the risk of transmission among the Sierran public was still very low but recommended people continue exercising preventive measures. On the same day, Westjet Sierra and Sierrair cancelled all of their flights.

On February 23, 2020, the United Commonwealth declared a state of emergency along the border with the Northeast Union. The Continental Commissariat of Health has begun efforts to train some 5,000 Continental soldiers to prepare for quarantine operations for the cities of Jersey, Union, Bayonee, Hoboken, Weehawken, Guttenberg and West New York. In addition the Holland Tunnel and the Lincoln Tunnels closed. Deputy Chairman of the Continentalist Party, Ulylan Saunders in a televised interview stated that he believes the Chinese Nationalists are responsible for the release of the Coronavirus at the Wuhan Institute of Virology.

Retrieved from "https://wiki.conworlds.org/w/index.php?title=COVID-19_pandemic&oldid=46492"
Categories:
Cookies help us deliver our services. By using our services, you agree to our use of cookies.