The ongoing worldwide pandemic of coronavirus disease 2019 (COVID-19), a new infectious disease caused by severe acute respiratory syndrome coronavirus 2 (SARS-CoV-2), was confirmed to have reached Skandinavia on 31 January 2020, when a woman returning from Wuhan tested positive. Starting from 26 February, following outbreaks in Italy and in Iran, multiple travel-related clusters appeared in Skandinavia. Community transmission was confirmed on 9 March in the Stockholm region. Since then, individuals in every Counties have tested positive for COVID-19. The first two deaths was reported on 11 March. Most confirmed cases that traces their origins outside Skandinavia are brought with tourists returning from Austria and Italy.

As of 22 April 2020, Skandinavia has performed 3,159,718 tests, reported 66,326 confirmed cases and 4,190 deaths. A senior consultant at the Folkehelseinstituttet said the reason why the mortality rate appeared to be smaller than in Italy or Spain was the high number of tests performed in Skandinavia. 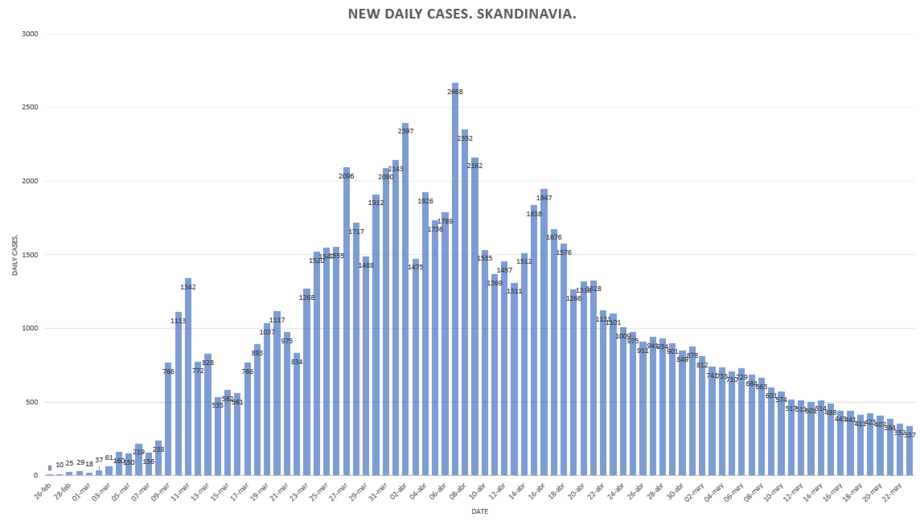 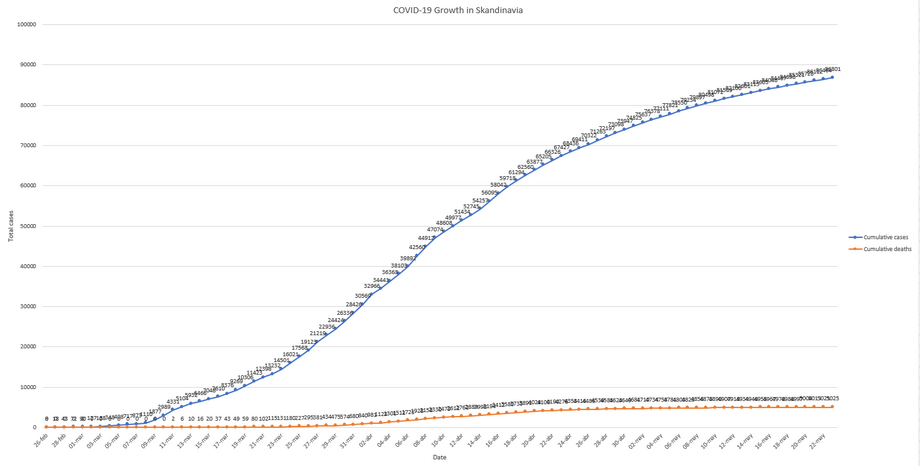 Since the severity of the pandemic began to be dimensioned, the government began working on the collection of medical supplies. In early March, exports of antiviral drugs, masks and protective equipment were banned.

On March 11, the government began decreeing social distancing measures to try to stop the increase in the number of infections. That day, concentrations of more than 50 people were banned and all cultural, sporting and all kinds of events involving concentrations of people were suspended.

On March 13, flights to China and Italy were banned and mandatory quarantine measures were imposed for travelers from any country. Teleworking was imposed as a mandatory measure for all non-industrial workers. In addition, the government mobilized a SKK318 billion ($60 billion) from the oil fund to finance economic support measures against the pandemic.

On March 16, all flights from all over Asia and the European Union were canceled, keeping only flights from NEA countries. On the same day, measures were launched to repatriate all citizens of Skandinavia abroad who requested it.

On March 17, the King entrusts the Folkehelseinstituttet with the management of the epidemic and places all government bodies under his authority regarding measures to combat it. The King, in accordance with the powers granted by the Constitution and with the advice of the Folkehelseinstituttet, will take the necessary measures directly without subjecting them to political debate.

On March 18, the government orders the mobilization of the Heimevernet (Home Guard) to collaborate in the fight against Covid-19. The Heimevernet will act in coordination with the Folkehelseinstituttet for the construction of field hospitals where required and contribute to the disinfection of facilities.

On March 20, stricter measures of social isolation were decreed, imposing a mandatory quarantine for all citizens. All non-essential commercial establishments must remain closed. From that day on, it's only allowed to leave home to make basic purchases and to go working in companies that remain open. Industrial activity is minimized but it is allowed to keep companies open that ensure they do not have cases of contagion.

On March 21, the government awarded the company deCODE genetics the execution of a massive test campaign for $ 28 million. All active workers must pass a test to continue their activity and it is estimated that by the end of April, 12% of the total population will have been tested. From that day on, personnel rotations on oil platforms are suspended, except in justified cases.

On March 25, the government approves a moratorium on the payment of taxes for professionals and small businesses that must remain closed. Likewise, measures are approved to stimulate the manufacture of sanitary equipment and goods. The government will grant special subsidies to companies that adapt their production lines to manufacture sanitary material.

On March 28 all international flights are prohibited except for those official chartered flights to repatriate Skandinavian citizens.

On April 1, the government decrees that all current measures will remain until at least April 15.

On April 3, the government orders that all health personnel of the armed forces who are not carrying out missions abroad must make themselves available to the Folkehelseinstituttet to reinforce hospital personnel if necessary.

On April 10, the government claims that the measures taken are paying off and that the spread of the pandemic is being controlled. The results show a decrease in the increase of new cases.

On April 14, the government is preparing a plan to progressively reduce the containment measures that it plans to start putting into effect from the next day 23 if the data on the expansion of the pandemic remain positive.

On April 18, the opening of all companies in the industrial and service sectors has been decreed, except for businesses linked to the hotel, restaurant, tourism, leisure and physical and sports activities. The obligation is imposed on companies to provide the necessary means of protection for workers. This opening will be conditioned to the case-by-case study if new outbreaks of contagion occur in any company. However teleworking is recommended whenever possible.

On April 20 the government has presented plans for the completion of mandatory confinement and the end of the state of emergency that will take place on May 1. The gradual return to normal economic and labor activity will take place in stages during the first weeks of May. The forecast is for the school year to resume on May 10.

On April 22, the opening of all public administrative activity for April 27 is announced. In this way it is intended to contribute to the normalization of the economic and productive activity planned for May 1.

On May 1, economic and commercial activity resumes, observing strict security measures. It is recommended to keep teleworking as much as possible, but the opening of all kinds of companies is authorized. In commercial establishments, measures will be observed to limit the capacity and avoid crowds.

Since May 2, the use of masks is mandatory in all public indoor areas as well as in outdoor areas where a safety distance cannot be guaranteed.

On May 7, the prohibition to move outside the county of residence for any type of travel is released. (Travel for work or health reasons was already allowed.)

As of May 13, hotels can also be opened, limiting their capacity and not allowing access to common areas or restaurants for people not staying.

As of May 20, all measures to limit mobility, as well as timetables, are eliminated in the interior of the country. However, the population is asked to move with prudence and responsibility, observing hygiene and sanitary measures and obligations. All public transport will operate on their regular frequencies and times taking into account the sanitary measures imposed on public transport.

One of the reasons that justify the low percentage of deaths in relation to verified cases, compared to the rest of European countries, is based on the high number of tests carried out. From the first moment, the government opted for the realization of a massive test campaign and that is why it commissioned the company deCODE genetics to carry out a huge test campaign on March 21st, which adds to the tests already carried out by the Health System.

The government has ordered the Regional Health Authorities to have sections prepared for serious cases of COVID-19 that require treatment in every main hospital, as well to be prepared to treat patients that are elderly or have pre-existing conditions and therefore are particularly vulnerable to the disease. Other hospitals were required by the Regional Healty Authorities to prepare lists of non-essential operations that can be postponed. This would allow the manpower, space and equipment to rapidly be allocated towards an outbreak of coronavirus. On 12 March 2020, the first hospitals began postponing non-essential operations as a preparation for future cases of COVID-19, and on 17 March this was done in all hospitals nationwide.

According to the guidelines by the Folkehelseinstituttet, all infected people that have no or mild symptoms and are not considered particularly vulnerable are placed in home quarantine with daily contact from health professionals. Anybody that has been in close contact with someone known to be infected with SARS-CoV-2 is also placed in home quarantine. The rollout of eHealth services has been accelerated to help combat the epidemic in all cases where face-to-face medical care is not necessary.