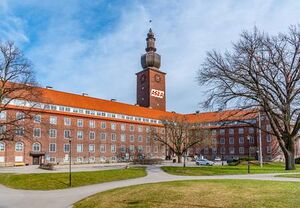 ASEA was founded 1883 by Ludvig Fredholm in Västerås as manufacturer of electrical light and generators. After merging with Wenström's & Granström's Electrical Power Company (Wenströms & Granströms Elektriska Kraftbolag) the name was changed to Allmänna Svenska Elektriska Aktiebolaget, literally the "General Swedish Electrical Limited Company", or a ASEA for short. In 1967 the name was changed to ASEA ASA and this name remains until today. 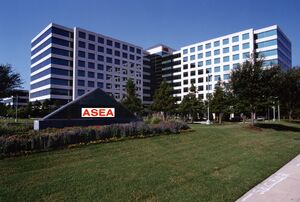 Current ASEA HQ in the area of Västerås.

In 2018 ASEA groups its businesses into 10 Business Units and three independent companies. It has a presence in 111 countries and more than 140,000 employees worldwide.

ASEA Atom is a Skandinavian company for the development and production of nuclear- related products and solutions. It is a wholly owned subsidiary of ASEA and is headquartered in Västerås. Since the acquisition of the state company SKANATOM in 1963, ASEA Atom has been the company in charge of developing Skandinavian indigenous nuclear technologies with generation I, II, III and III + reactors. At present, the company is working on the development of generation IV reactors. The development of nuclear technology protected and encouraged by the Skandinavian state has allowed ASEA Atom to become one of the world leaders in the design and construction of nuclear reactors with numerous reactors installed in plants around the world.

ASEA Atom also own and operate a nuclear fuel factory on Finnslätten, wich is able to supply most of the different nuclear reactor types in the world.

ASEA Trans is the rail equipment division of the Skandinavian multinational firm ASEA ASA. ASEA Trans is one of the world's largest companies in the rail vehicle and equipment manufacturing and servicing industry. It is headquarter in Skedsmo, Skandinavia. There are many regional offices, production and development facilities worldwide. ASEA Trans develops and markets a complete range of systems, equipment and service in the railway industry. It is one of the world's largest manufacturers of high-speed trains, tramways and metros, electrical and diesel trains, information systems, traction systems, power supply systems and track work. The company also operates in the rail infrastructure market, designing, producing and installing infrastructure for the rail network. These includes information solutions, electrification, communication systems, track laying, station utilities, as well as workshops and depots. Maintenance, rebuilding, and renovation services are also provided by the company. ASEA Trans operates in more than 50 countries and employs more than 19,000 people.

ASEA Green Tech is an independent company, wholly owned subsidary of ASEA ASA and headquartered in Copenhagen, focusing on production of energy from renewable sources. Its portfolio of products includes wind (onshore and offshore), hydroelectric and solar (concentrated and photovoltaic) power generating solutions.

ASEA Green Tech's hydropower core expertise is the design and develop of innovative power plant solutions. Pelton, Francis, diagonal, flow-through or Kaplan turbines are used depending on factors such as head, the volumetric flow rate or operating mode with fully automated and remotely monitored on request.

ASEA Green Tech's is one of the leading manufacturers of wind turbines. ASEA Green Tech develop, manufacture and sell onshore and offshore turbines for virtually any site and provide customers all around the world with innovative and individual solutions from turbine design to logistics and installation, from foundation construction to service and maintenance.

Retrieved from "https://wiki.conworlds.org/w/index.php?title=ASEA&oldid=35546"
Categories:
Cookies help us deliver our services. By using our services, you agree to our use of cookies.