ASEA's nuclear history began as early as the 1950s when both the Ågesta and Marviken reactors were constructed and constructed . In 1962 ASEA started the nuclear facilities development of the Skandinavian light-water reactor that led to the order of the Oskarshamn 1 in 1965 and start construction in 1966. The same year started nuclear fuel production in the so-called "old" fuel factory on Finnslätten, Vasteras, and started manufacturing fuel for Oskarshamn 1 reactor. In 1969 ASEA Atom was created as subsidiary after the acquisiton of the state-owned SKANATOM and the merger of SKANATOM with the nuclear energy business inside ASEA. At this time, the number of employees was 355. During the period 1966-1985, Asea-Atom was the dominant supplier for the development of the Skandinavian and Finnish nuclear power programs.

In 1971, the "new" fuel plant was ready for producing control rods and complete fuel elements for boiling water reactors (BWR). Further expansion of the factory took place and a conversion plant was put into operation in 1976. In 1982 the company started with the production of fuel for pressurized water reactors (PWR). In 1986, the business is further expanded through uranium recycling . The number of employees grew during the 80s and in the early 1990s there were almost 1,000 employees. In 1990 the American power company Combustion Engineering was acquired. During the 1990s, development is continued and ASEA Atom enter the German and Spanish markets.

BWR 69 was the first reactor designed by ASEA and developed and built without reliance on licenses. The first BWR 69 unit, Oskarshamn 1 nuclear power plant in Skandinavia was taken into operation in 1972. This design incorporated a number of advanced features such as a pre-stressed concrete containment, fine-motion control rods and a passive isolation condenser. Subsequent plants with BWR 69 reactor were designed much along the same lines as Oskarshamn 1, with step-wise improvements. 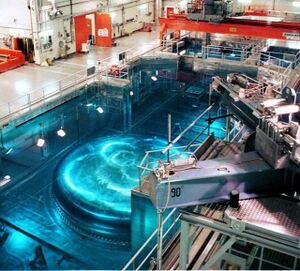 Development of the advanced Generation II BWR 75 design was major step forward in ASEA Atom designs. BWR 75 is characterised by use of internal recirculation pumps, fine-motion control rod drives, four independent and physically separated trains of engineered safety systems and a pre-stressed slip-formed containment. Twelve BWR 75 reactors were built in different countries and most of them are still in operation. The accumulated successful operation experience of these plants amounts to almost 100 reactor-years, and demonstrates the capability of being operated at high energy availability factors. The total electricity generation costs have been low, as demonstrated by the published production costs for the Lemvig 1,2, and 3 plants during the last decade.

The BWR 90 design is based on the experience from design, construction, commissioning and operation of the BWR 75 plants. The design is characterised by the use of internal recirculation pumps, fine-motion control rod drives, and comprehensive physical separation of the four-train safety systems, basically in the same way as in its predecessor, the BWR 75. The thermal power rating of the base version is 3,800 MWth, somewhat higher than that of the reference plant, supplemented by a smaller unit of 3,300 MWth. The BWR 90 takes advantage of margins gained by BWR fuel development results, e.g., the introduction of a fuel with four sub-assemblies of 5x5 fuel rod array, offering increased heat transfer capability and thereby permitting power increase.

In 1997, the Steering Committee of the European Utility Requirements (EUR) group, selected the BWR 90 design as the first BWR design to met the European Safety Requirements. The first operational BWR 90 reactor was Halden 4 in 2007.

A main emphasis in the development work has been to maintain "proven design" features, unless changes would yield improvements and simplifications. In line with this philosophy, the reactor design has been based on previous models emphasizing improved performance and safety.

The core design is closely the same as in BWR 75. Advanced utilisation of burnable absorber material (Gd2O3) in the fuel made it possible to achieve good axial and radial power distribution with low peaking factors. The SVEA-100 fuel with its thinner fuel rods yielded an increased heat transfer surface and improved operating margins. For the BWR 90, the improved power peaking factors and the increased margins were taken into account to raise the power level of the reactor. In other respects, the core design and arrangement are not changed. The control rod and control rod drives are of the well-proven ASEA Atom design with a grey-tipped solid steel blade cruciform rod; the neutronabsorbing material is filled into horizontal bores - boron carbide along the blade length and hafnium at the blade tip. The steam separator units have been improved - and the steam dryers as well - in order to ensure low moisture content in the steam at the increased power output; the basic arrangement is just the same as in previous plants. The reactor pressure vessel has been modified slightly. The cylindrical portion is made up of cylindrical forgings in the same way as in latest BWR 75 reactor built; this eliminates the longitudinal welds. The bottom portion is redesigned in such a way that large sections can be made by forging; the number of welds is reduced significantly. This reduction in number of welds is important for the plant operation since it reduces the amount of in-service inspection to be carried out during the refuelling outage.

The introduction of modern control systems based on automation systems and computers has been key to improving reliability and safety. 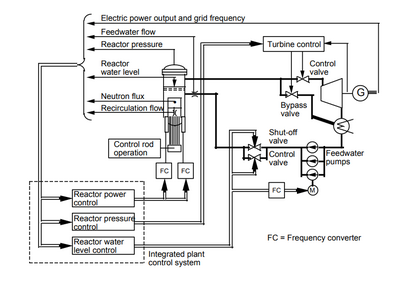 BWR 90+ is a nominally 1600 MWe evolutionary advanced design on the BWR 90 reactors. Its advanced design makes it a competitive option awaiting the arrival of the Generation IV reactors that are expected to be operational in the 2030s. The main objectives of the project focus on anticipated utility needs in the 21st century; the new design offers reliable power generation at reduced construction and operation costs and incorporate significant safety improvements. The on-going review of the BWR 90 is of importance for the BWR 90+ development work, and observed findings are specifically addressed in the design.

With respect to economy, the work was aimed at developing a plant with reduced investment cost, short construction time, and high-energy availability. The fundamental design features of previous designs with respect to power production were incorporated. The most significant improvements result from a modified containment design. It provides an inherent protection of the cooling of the reactor core against possible loss-of-coolant-accidents during a refuelling outage by flooding. The effects of severe accidents have been taken into account, and the containment structure will not be the first barrier to arrest a molten core. The improved design, and utilisation of modular construction procedures, will render a significant reduction in costs and construction time.

With respect to flexibility and reliability the governing design guideline is: "Proven system design and components are to be adopted to ensure reliable electricity production, and moderate development steps are introduced only when bringing improvements." As a result, most of the fundamental design features from the previous designs with respect to the energy production capability and reliability will be incorporated also in the BWR 90+design. Some specific design and performance goals of the BWR 90+ development project are:

The safety system configuration in the BWR 90+ design is characterised by a mixture of diversification, redundancy and separation, including the use of passive systems. The four-train principle with independence and separation, originally introduced in the BWR 75 design, is maintained. This principle has yielded cost savings in the field of operation and maintenance since it provides possibilities for inspection, testing and maintenance activities during normal operation. 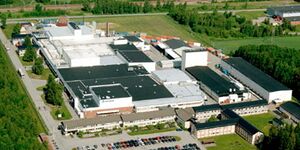 ASEA Atom is focused on nuclear fuel reliability. ASEA Atom’s robust fuel designs and proven performance make the company an industry leader delivering greater than 95 percent reliable fuel, the best performance in the industry. From the Västerås Fuel Plant, ASEA Atom is a single-source fuel provider for PWRs, BWRs, AGRs and also VVERs worldwide. ASEA Atom is one of the world's leading integrated supplier of nuclear fuel products and services.