There has been little case law affecting abortion in Alcenia. The last abortion-related case heard in the Supreme Court of Alcenia, Harper v. Ilanuras (2011), held laws that criminalize abortion past a certain trimester are constitutional, but no challenge to laws that ban abortion entirely have arisen. Other rulings in lower courts generally surround federal and state funding of organizations that provide abortion services. Currently, the federal government of Alcenia does not provide any grants to any organization that performs abortions, but does provide funding to some states who in turn give that money to those organizations. The Alcenian Society of Birth Control (ASBC) us the largest pro-choice lobbying group in Alcenia which also offers reproductive services. The Coalition to Protect Life (CPL) is the largest pro-life lobbying group in Alcenia which also offers adoption assistance for women with unplanned pregnancies.

Public opinion varies depending on state polled. In Vellonia, which has the most permissive abortion laws (legal for any reason up to 12 weeks), 67% of respondents said they identify as "pro-choice" and 64% said they support legalizing abortion nationwide. Among states where abortion is illegal in all cases, Sidanevi had the highest percentage of respondents identifying as "pro-life" with 89%. Nationwide, there is little gender divide between opinions, with an roughly equal percentage of men and women identifying as pro-choice and pro-life. Nationwide, around 48% of Alcenians identify as "pro-choice" while 45% identify as "pro-life" with the remaining 7% having no opinion on the issue.

The federal government of Alcenia defines "abortion" in this context as "the intentional termination of a pregnancy" which distinguishes it from a miscarriage, referred to in the medical community as a "spontaneous abortion". 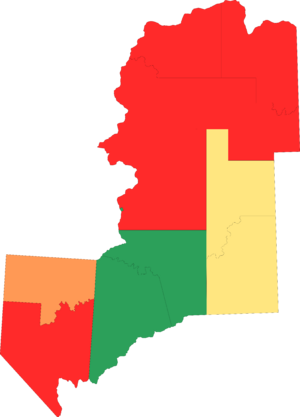 Every state except Vellonia and Nievia restrict abortion to only certain circumstances or criminalize it outright. It is legal in the District of Sunalie up to 14 weeks.

In states where the fetus or baby's father could be entitled to restitution, the father must show a "clear and persistent" opposition to the abortion. There must also be no doubt or contest present as to the paternity of the fetus or baby (often, simply denying being the father even once disqualifies him from restitution in the event of an abortion). In practice, this kind of restitution is rarely paid out, as the standards for proof are very high and strict.

The key argument for the pro-choice movement in Alcenia is that a woman has a right to bodily autonomy and therefore the right to end a pregnancy she does not wish to carry to term. Some supporters of the pro-choice movement also argue that children who were unplanned and unwanted often turn to crime as they grow up and become a detriment to society.

The key argument for the pro-life movement in Alcenia is that human life begins at conception and therefore has a right to life which makes terminating a pregnancy the same as murder.

Within the pro-life movement, some agree there should be exceptions. A poll showed 59% of those who identify as pro-life said they would accept an exception for rape, incest, or threat to woman's life.

Data from the Vellonia Department of Public Health shows the top ten reasons why women get an abortion are:

Sunalie and Nievia, the only other two jurisdictions that allow abortion for any reason up to 14 and 8 weeks, respectively, do not allow a physician to ask why a woman she is requesting an abortion.