Warren was born into a high status military family from Kentucky, a societal position that paved for his academic sponsorship by his uncle, Major General Gregory Warren, at the The Presidio, The Military College of San Francisco which at the time was considered the premier military academy in North America. Aware of the declining social conditions of Appalachia, the Paint Creek Massacre cemented his distrust towards the Federalist Party. During his freshmen year at the Presidio, Warren was introduced to senior classmate Zhou Xinyue who introduced him to the ideology of Landonism and other variants of socialism. Zhou sponsored his introduction to the Seventy-Seven Society where Warren became dedicated to the prospects of developing a socialist society. In 1916 he was aided by Zhou Xinyue in an escape from the San Francisco Peninsula, leading to Zhou's military discharge. Warren's journey to the United Commonwealth was riddled with interactions with militant groups throughout Tournesol and Brazoria. According to accounts by his classmates and fellow revolutionaries he was never considered a particularly gifted orator or military tactician, rather it was Zhou's dedication to Warren that solidified his revolutionary authority.

During the Revolutionary War, Aeneas was key in leading the efforts in Appalachia, where the Continentalist made their foothold in the Federalist regime. During the Boxcar Affair, he presided over the event, although the coining of the term "Continentalist" and the central Five Virtues of the People were attributed to Zhou. Warren heavily favored syndicalist thought, believing that labor controlled industries would pave the way to economic liberation and the fruition of a socialist society. This line of thought has persisted throughout the Continentalist regime and is favored among the Labor Front, also known as the Continental Yeomanry. This was at odds with Zhou who favored democratic centralism and a continued single-party state under the auspicious dictatorship of the proletariat. Warren's military aptitude shined during the Appalachian Insurgency, leading the efforts during the Battle of Black Mountain. During the Battle of Chicago he took a step back from military activities and primary focused on establishing a civil government throughout the collapsing Federalist regime, designating Zhou full authority over the Continentalist forces.

Among his initial actions during the Provisional Revolutionary Government and after the establishment of the Continental States, was to house the vagrant population of the United Commonwealth. During the session that established the nation, he appointed Elliot Fowler as Secretary of the Continental Commissariat for Housing and dedicated the nations resources to rebuilding its infrastructure and housing. Warren enshrined within the Constitution of the Continental States the concept of universal suffrage, providing access to the ballot regardless of marital status, gender or race. Warren pushed for universal education, establishing large centers to educate women, minorities and those within the lower class. Warren effectively ended the 3 month long Crimson Terror, a period after fall of the Federalist regime where Continental tribunals were sentencing tens of thousands to death or reeducation camps. He provided clemency for all Federalist soldiers, medium and low level governmental workers, teachers and formed the Commissariat for Industrial Reparations and Cooperation which provided industrialists and skilled workers legal protections.

Warren's unwillingness to consolidate control and popularity among the working class and former Federalists, ushered in an era of public trust within the government. His belief in collective leadership allowed for internal fighting within the Central Committee, albeit privately. The internal struggle between the former Federalist Postmaster Callahan and Commissioner Zhou was a key issue before his death. Warren's dedication to being among the general populace brought a great strain on him and on September 10th he was diagnosed with the Spanish flu. In his last public speech, he famously stated "our goal is the happiness of all mankind", which has become a hallmark of the Continentalist Party. On September 14th, Warren died in Chicago at Northwestern University's Feinberg School of Medicine.

Prior to Warren's departure to the Persidio he entered into a relationship with Madeleline Waldmann, the daughter of a coal miner in Pikeville. Introduced at their local Methodist Church, the two became involved romantically within several weeks of meeting one another. During the development of Warren's cult of personality after his death, the government and media intentionally portrayed the two having undergone a deep infatuation and were childhood sweethearts. Part of Callahan's efforts to rebuild the conservative family structure, the duo were portrayed as the exemplary couple. Waldmann became a follower of Landonist teachings around the same time as Zhou introduced Warren to the Seventy-Seven Society, having joined a local faction in Kentucky. The two wrote encouraging one another regarding their ideological pursuits, among the letters released to the public detailed the couples wishes for a socialist society for their children.

Government officials up until 1996 claimed that the two were married upon his return to the United Commonwealth, but after the release of several revolutionary documents at the Continental Commissariat of Archives and Records including letters held at the Royal Depository in Sierra revealed a rocky relationship between the two and that the two had discontinued their relationship in 1920. Letters within Zhou's personal library revealed correspondence between the two regarding Waldmann, where Warren detailed the dismal state he had entered into upon their splitting. Zhou wrote within his own personal letters that he believed Warren died of a broken heart and described that the Secretariat was falling into a state of madness, modern historians describing it as psychosis induced by posttraumatic stress disorder from the split. Having not spoken to Waldmann in nearly a year provided her with his estate and wrote in detail to Zhou and Callahan to maintain her status with the party. Waldmann became the Secretary of the Judicial Commissariat of the Continental States, wielding influential power on the basis of her relationship with Warren. Zhou objected to her appointment as the Judicial Commissariat and actively plotted to have her purged from the party. In 1922, Waldmann aligned with Callahan and assisted in the assassination plot to kill Zhou and his allies. 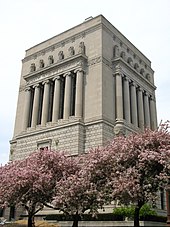 Retrieved from "https://wiki.conworlds.org/w/index.php?title=Aeneas_Warren&oldid=194092"
Categories:
Cookies help us deliver our services. By using our services, you agree to our use of cookies.