Società Aeroplani Ernesto Rossi more simply referred as Rossi Aeroplane or Rossi,initially founded under the name of Atelier dell'aeroplano Rossi is a Northern Descionian aircraft manufacturer,founded in 1843 by Ernesto Rossi in the city of Minaventi,the first years Atelier dell'aeroplano Rossi was a workshop and private atelier,in which Ernesto Rossi and 10 of his workers were building glider prototypes in 1850 they finished their first experimental glider and it had first flown on may 6th 1850.The flight attracted major attention as in the 1850s the aviation was just "taking off",in 1859 Rossi made a biplane that attracted the attention of the government and initially the government bought 6 biplanes which helped Rossi and his man expand the company and move to a warehouse in the industry district in Minaventi,in 1863 thanks to the government financing Rossi designed an observation airplane for the aeronautica reale used but the A.R for surveillance of South parts of Zastanvia and Republic of Descionia,in 1869 after showing the Ro.4 to the A.R financment dropped because the conservative Aeronautica Reale considered monoplane and experimental airplane design a waste of time,so Rossi abandoned it's financial supporters and moved on with his dream of making passenger aircraft which he successfully started when he released the Ro.5 a very successful 2 engine bi-plane.Later Rossi had even more conflicts with the government but at the end of the Unification war,he could finally work on airliners and transport planes,The company grew to a national size with factories in Minaventi,Parmucci and Garvani.At the outbreak of the World War he got cornered by the government again but the now Aeronautica Descionia understood the importance of design freedom for now Rossi's son Giovanni who became the CEO of Società Aeroplani Ernesto Rossi when his father died in 1903 during a test flight of one of his airplanes.With the technology perfected in the Inter war years,Descionian Bombers were considered ones of the best in 1944 Società Aeroplani Ernesto Rossi developing first prototypes helicopters.WIP. 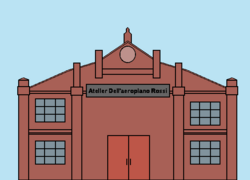 Retrieved from "https://wiki.conworlds.org/w/index.php?title=Aeroplani_Rossi&oldid=44313"
Category:
Cookies help us deliver our services. By using our services, you agree to our use of cookies.