The Akagi-class (or 75CVN class) is a class of three nuclear-powered aircraft carriers in service with the Japanese State Navy. The lead ship of the class is named after World War II First Air Fleet aircraft carrier Akagi. With an overall length of 315 m (1,033 ft) and full-load displacement of over 85,000 long tons (86,000 t), the Akagi-class ships are some of the largest warships built and in service in the world. The Akagi-class was designed to replace the Taihō-class, in service during most of the First Cold War. The name of the lead ship, JSN Akagi was selected and announced ahead of the 40th anniversary of the beginning of World War II, and she was commissioned in service with the State Navy in a ceremony commemorating the 50th anniversary of the war.

Akagi-class carriers use two marine nuclear reactors, instead of the gas propulsion or diesel-electric systems found on many modern warships, for power and propulsion. These reactors drive four propeller shafts and can produce a maximum speed of over 30 knots (56 km/h) and maximum power of around 276,000 shaft horsepower (206 MW). As a result of the use of nuclear power, the ships are capable of operating for over 20 years without refueling and are predicted to have a service life of over 40 years. They are categorized as nuclear-powered aircraft carriers and are numbered CVN-11 (Akagi), CVN-12 (Kaga), and CVN-51 (Shōkaku).

The three carriers were built as a joint venture of Sumitomo Heavy Industries, Mitsubishi Heavy Industries, and the State Navy's Kure Naval Arsenal under a procurement contract from the Ministry of Defense. The award of the contract was announced in a press conference by the Minister of Defense on 25 July 1977. JSN Akagi, the lead ship of the class, was commissioned on 20 August 1990, and JSN Shōkaku, the third and last of the class completed, was commissioned on 3 June 2004. A fourth ship of the class, JSN Zuikaku, is planned, but the start of development has been postponed multiple times since the Financial crisis of 2007–08.

The carriers have angled flight decks and use a Catapult Assisted Take-Off/Barrier Arrested Recovery arrangement to operate aircraft, with steam catapults and arrestor wires for launch and recovery. As well as speeding up flight deck operations, this allows for a much wider variety of aircraft than with the STOVL arrangement used on smaller carriers. The ship carries a complement of one carrier air wing, usually composed of 60-65 Mitsubishi F-3S Zeros, support aircraft, and search and rescue craft. In addition to their aircraft, the vessels carry short-range defensive weaponry for anti-aircraft warfare and missile defense.

The Akagi-class was developed as a replacement for Taihō-class, which first entered service in the 1950s. The last Taihō-class ship, JSN Tsubasa, was the first Japanese ship to use nuclear propulsion. Tsubasas design was heavily modified from the typical Taihō-class hull, necessitated because of the size of the nuclear reactors and necessary cooling equipment. The Ministry of Defense's experience with the Tsubasa program informed the design of the more efficient, and now standardized, Umi Hinode reactors, built in partnership with Hitachi Nuclear and used in the Akagi-class. The Akagi-class contains several improvements over the Taihō-classTaihō-class and Tsubasa, in addition to the smaller reactor compartment. This means that Akagi-class carriers can hold twice as much fuel and ordinance compared to the Tsubasa.

The 75CVN Program to develop a new line of nuclear-powered aircraft carriers was officially commenced by the Ministry of Defense in 1975, but was accelerated in 1979 following the Emergency Declaration of 1978. The first ship, Akagi, was laid down on 4 November 1983 at Kure Naval Arsenal's main dock, where the battleship Yamato was built. The Akagi-class is the first JSN ship class to utilize a modular design, where sections of the ship are constructed in whole, with plumbing and electrical fittings pre-installed landside, lifted into place by gantry cranes at the drydock and welded together to construct the ship. Each ship cost approximately KS$7 billion to construct.

Akagi-class ships are named after Imperial Japanese Navy aircraft carriers serving in World War II. The name of the lead ship, Akagi, was announced by the Ministry of Defense on 16 May 1980.

Akagi's sister ship, Kaga was named at a ceremony on 8 December 1984.

Shōkaku and Zuikaku were announced together on 25 January 1990. Shōkaku was constructed and commissioned into active service on New Year's Day 2000, but Zuikaku had a troubled development process, which was further complicated by the 2007-8 financial crisis, and is currently postponed until a future date.

The Akagi-class hangar deck is divided into four sections that can be independently operated in case of fire or emergency. Each section is separated by steel fire doors that can be closed to contain an incident. Since the aircraft carriers are operated as part of a carrier strike group with escort ships, less focus was placed on survivability, with more attention paid to more efficient flight operations, like fuel and munitions storage, and flexibility of operations. This allows for a wider range of missions to be undertaken by the ship and its embarked aircraft, such as reconnaissance, long-range missile strikes, naval mine laying, and area of control blockades.

All ships of the class are powered by two Umi Hinode nuclear reactors, housed in separate compartments. The reactors produce heat through nuclear fission which heats water into steam. The generated steam passes through four steam turbines, shared between the two reactors, generating shipboard electricity and spinning four propeller shafts, producing a maximum speed of over 30 knots (56 km/h; 35 mph) and maximum power of 276,000 horsepower (206 MW). Each propeller, made from bronze, has a diameter of 8 metres (26 ft) and a weight of 30 metric tons (66,000 lb). The total area occupied by reactor components on the Akagi-class is roughly half the size of the compartment on the Tsubasa, owing to the new compartments being purpose designed rather than retrofitted. All ships of the class have bulbous bows, building upon designs tested by the Imperial Japanese Navy on the World War II-era Shōkaku and Taihō and later work by Dr. Takao Inui at Tokyo University in the post-war years. This design reduces drag, increasing speed and stability of the ships, requiring less energy used on propulsion. 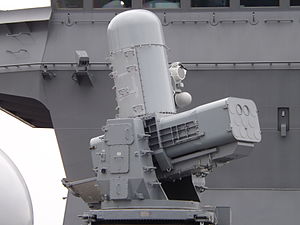 Akagi-class ships have a light self-defense armament to supplement onboard aircraft and escort ships. Typical armament consists of three onboard 20mm radar-guided cannon close-in weapon systems for anti-missile fire and two SeaRAM launchers for anti-aircraft fire. For anti-submarine countermeasures, the ships carry a number of towed torpedo decoys that generate sonar signals to create a false target for inbound torpedoes. Carriers embark a carrier air wing before deploying on an operation, typically consisting of 60 to 65 aircraft (with a maximum of 90 aircraft on board). Air wing operations are integrated with ship operations while the wing is embarked, though each air wing is structurally independent from the carrier. A typical air wing includes 40-50 F-3S Zero strike fighters; 4-8 Overstars P-3 Orions for electronic warfare and airborne early warning; and 8-10 Mitsubishi SH-60s for anti-submarine warfare.

The carrier's flight deck is angled ten degrees, increasing the efficiency of flight operations, as aircraft can be launched and recovered at the same time. Four steam catapults, two at the bow and two at the waist, are used to launch fixed-wing aircraft. Three arrestor wires are used for recovery. The carrier's air operations are centrally managed from the Local Airspace Control (LAC) Section in the island superstructure. Aircraft are elevated to the deck and lowered to the hangars using four aircraft elevators on the flight deck. The flight deck is armored with thick layers of a flexible synthetic fiber that absorbs kinetic energy, to provide additional protection for the hangars from bombing attacks.

The ships' onboard electronics systems were developed by the Ministry of Defense specially for the Akagi-class. The second-generation Integrated Fire Control System uses an active electronically scanned array with two bands: one for medium-range scanning and navigation; and one for close-in tracking and fire control. The ships also possess an advanced electronic warfare systems suite which can detect and disrupt hostile radar systems operating nearby.

In terms of onboard facilities for the crew, each ship possesses a full shipboard hospital deck, with a medical lab, pharmacy, operating theater, dental surgery, emergency department, intensive care ward, and general ward, with a full medical staff. Crew berths are generally stacked three high, with space for each sailor to have a locker and be able to sit-up in their berths. Each berthing area on the Akagi-class can fit 75 racks, and has an internal head, with showers, toilets, and sinks. Crew recreational and entertainment facilities include a cinema, gym, six galleys and six dining areas manned by 100 catering staff, and a shrine.