Alice Rie Nishikata (西方 李依 Nishikata Rie, née 高木 Takagi; born February 27, 1994) is a Japanese Hawaiian politician and seiyu. She is currently serving as the Member of the American Parliament for the Hawaiian Islands for the Social Democrats of America. She was elected in 2015. She sits on the American Parliamentary Committee on Labor and Employment Affairs and the American Parliament Committee on Human Rights and Civil Liberties. Prior to running for office, she was notable for her voice acting career as a seiyu (voice actress) for Sierran anime series. She is known for her roles as Sanae in Tutor Goddess, Ayumi in Four Horsemen of the Apocalypse, and Janet in Dreamcatcher's Tale.

As the youngest member of the American Parliament, she is the current Baby of the House and the youngest MAP to have served Hawaii. When Nishikata was elected, she was 21 years, 2 months, and 23 days old, the fourth youngest ever to be elected into the American Parliament. She ran on a campaign advocating for indigenous Hawaiian rights, environmentalism, women's rights, pacifism, and stronger workers' protections. Nishikata's race also garnered widespread Internet attention as fans promoted her election campaign as "the cutest candidate in Sierra" and "electable anime girl" through the use of online memes and industry endorsements.

Nishikata was born Alice Rie Takagi in Pearl City, Oahu to Japanese Sierran nisei parents as an only child. Her father, John Takagi, was born in Honolulu while her mother, Maria Takagi (née Takeuchi) was born in Maui. Her father worked as a grocery store manager at Krahn's while her mother was a public elementary schoolteacher. As a child, she was a Girl Scout and earned a blue belt in judo. She attended King David Kalākaua High School where she was president of the Japanese Students Association and a member of the school's Model League of Nations team. She graduated in 2011 with high honors. In 2015, Nishikata graduated from University of Sierra, Diamond Head with a bachelor's degree in political science with a concentration in public administration.

In 2011, Nishikata began a career in voice acting at 17 while she was still attending high school. She auditioned for the Zabuza Talent Agency, which she discovered while attending the Honolulu Anime Convention. After she passed her audition, Nishikata was offered voice acting training by the agency, which she accepted. In her contractual arrangement with the company, she was allowed to simultaneously attend University of Sierra, Diamond Head and the agency's in-house training school, and continue her studies while she worked as a voice actress. She debuted in 2013, initially played background characters or supporting roles in Sierran anime series, as well as a number of cartoon series. She played her first lead role as the main character Asuka in the anime television series Wisdom of Repugnance.

In 2014, Nishikata was then casted as Sanae in Tutor Goddess, which was considered her breakthrough role. The show was a commercial success and her character proved highly popular among Sierran and international audiences. She received accolades at the Sierran Animation Awards as Best New Voice Actress and was then cast to play Ayumi in Four Horsemen of the Apocalypse. She also voiced Lisa in Neighborhood Wars, Yuri in Eclipse Project, and Princess Hermia in Titania: Queen of the Fairies. In 2018, she played the role as Janet in Dreamcatcher's Tale where she also performed the series' opening themes.

Member of the American Parliament[edit] 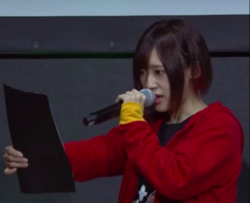 Nishikata reading a speech during an electoral rally in 2015

Nishikata became a Member of the American Parliament in 2015, while she was in her final year as an undergraduate student at the University of Sierra, Diamond Head. Her electoral campaign was largely propelled both by her progressive platform, as well as her fame for her concurrent voice acting career. She ran for Hawaii's Member of the American Parliament after being inspired by Clara Devons, a 19-year old university student from Shasta who nearly won a seat in the Shasta Provincial Legislature. As a political science student, Nishikata was persuaded by her peers and her fans to stand on the 2015 American elections and get involved in politics. She reportedly received encouragement from her employers at the Zabuza Talent Agency due to publicity attention. She ran against several other candidates under the Social Democrats of America ticket in the 2015 American elections for the Hawaiian Islands constituency, whose seat was vacated by outgoing MAP Megan Okazaki.

Her campaign received national media coverage that focused on her age, voice acting, and ongoing enrollment at a university while running for office. RBS made a documentary which followed her six-month campaign as she balanced student life, acting, and the election. Additionally, Nishikata's campaign became the subject of widespread interest on the Internet, particularly among Sierran netizens and anime fans. Her fans propagated memes and social media to spread awareness of her race, and encouraged voters to elect Nishikata and her party. Various slogans emerged including the declaration that Nishikata was "the cutest candidate in Sierra" and an "electable anime girl", which further improved her electability among Hawaii's young constituents.

On May 25, 2015, Nishikata was assigned to both the American Parliamentary Committee on Labor and Employment Affairs and the American Parliamentary Committee on Human Rights and Civil Liberties. In her maiden speech on June 1, 2015, she announced her intention to fight for the rights of workers, as well as indigenous people's rights and self-determination. She also criticized CAS for failing to do more to hold its member states accountable, pointing to the CAS's failure to timely reprimand the Sierran RIA's black site activities in Canada.

In 2017, she supported the CAS initiative to expand the St. Louis Area to cover all of the CAS member states. She also backed the ascension of the United Provinces to the Conference of American States and has been a proponent of greater integration across the Americas.

In 2019, Nishikata announced that she would not be running for a second term in the American Parliament. She stated that she would be seeking a seat in the House of Commons instead and would contest in the next election when it is scheduled.

Nishikata has supported expanding welfare benefits to migrants and refugees. She has also backed a transnational minimum wage law and greater protections for workers and labor unions. She supports a progressive tax model and for CAS member states to switch to using a value-added tax system over sales tax.

Nishikata is an ardent supporter of LGBT rights and has been a vocal supporter of Hawaiian Pride, the largest LGBT+ rights organization in Hawaii. In a 2015 interview she stated that she supports LGBT rights absolutely and supports nationwide legalization of same-sex marriage in the entirety of the Kingdom of Sierra. Nishikata has criticized the Royalist Party for opposing efforts to legalize same-sex marriage as well as supporting laws allowing business owners and orphanages to not serve same-sex couples if it violates their conscious stating "we no longer tolerate such arguments when it comes to interracial and non-white couples, despite those same arguments being used in defense of such abhorrent laws, why should we tolerate it for gay people" in an interview with The Bunker Hill Journal. She's also vocally criticized efforts by the American Conservative Coalition to support similar laws across Anglo-America and has opposed efforts by the ACC to pass resolutions through the American Parliament supporting laws aimed at curbing the legalization efforts across CAS member states.

Nishikata has also been supportive of trans rights and has opposed efforts, both in Sierra and in the CAS, to prevent the advancements of rights and legal protections for trans people across Anglo-America. She's accused the ACC and other conservative parties in the CAS, such as the Royalists in Sierra and United Conservatives in Superior, of targeting trans people and doing so due to them lacking legal representation in their own countries and on a pan-American level. In a 2019 interview, Nishikata stated that trans rights were human rights and she will defend them no matter what during an interview with the RBS.

Nishikata has expressed solidarity with the Hawaiian sovereignty movement, despite not supporting it outright. She described the movement as "a legitimate, organized expression of frustration with the Sierran government's treatment of its indigenous Hawaiian community". She has attended a number of Hawaiian sovereignty movement events and marches, and met with leaders of the Hawaiian Sovereignty Party. She has defended the existence of the three uninhabited Hawaiian PSAs (East Leewards, Kamehameha, and West Leewards) as a means to increase the equitable representation of the Native Hawaiian people.

In 2015, Nishikata married Harry Nishikata, her high school sweetheart and a gym fitness trainer. They have a daughter, Tracy Chī Nishikata, who attends an elementary school. Nishikata is a Buddhist who also syncretistically observes Shinto celebrations and customs in a fashion described as shinbutsu-shūgō (literally "syncretism of kami and buddhas") in Japanese culture. She is fluent in both English and Japanese, and has limited knowledge in Spanish, Chinese, and Hawaiian Pidgin. She has consciously incorporated a number of words and phrases from the Hawaiian language into her speech.

Nishikata describes herself as a "social democrat" with sympathies towards socialism and Landonism. She has drawn inspiration from Susan Kwon and Nazareth Ontoria-Diaz as role models for her politically and personally.

In 2018, she expressed the difficulties of balancing her work life as a lawmaker and a voice actress with her personal life as a wife and a mother. She was declared "Hardest Working Woman of the Year" by the feminist magazine Radiance which documented her meticulous schedule. In the magazine she admitted that she was a "workaholic" and took both of her professional jobs "very seriously". She stated that she has sometimes recorded her voices for her voice acting work during her official plane commutes between Hawaii, Porciúncula, and St. Louis.