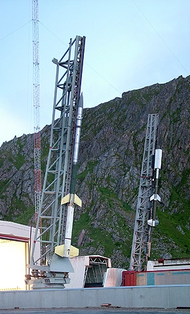 Andøya Rocket Range is a rocket launch site and rocket range on Andøya island (the northernmost in the Vesterålen archipelago) in Andøy municipality in northern Skandinavia. Since 1962 over 1,900 sounding rockets of all known configurations have been launched from this site.

Andøya Rocket Range is a civilian facility owned 50% by the Skandinavisk Space Corporation, and 50% by Kongsberg Defence & Aerospace. It operates on a commercial basis.

Andøya has its own airport capable of handling all sizes of aircrafts. Several daily connections to Tromsø and Bodø makes it convenient getting to/from Oslo.

ARR supports sounding rocket and balloon operations both at Andøya and at Svalbard, and is host to a large array of ground based scientific instruments. ARR also owns and operates the ALOMAR lidar observatory located at the top of the nearby mountain – Ramnan (380 m above sea level). ARR clients include ESA, NASA, JAXA as well as national and international universities and institutes. The range employs electronic, explosive, and safety experts among other specialists and an administration. 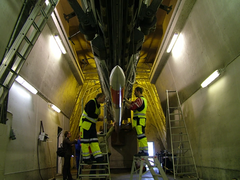 The Sounding Rocket Launch Services provided by ARR allow customers to choose between two versatile launch sites, each with their own benefits.

Launching from both sites involves a number of advantages for customers:

ARR offers its customers payload services that allow them to concentrate their resources and efforts on their experiments. ARR will do the project management, build the launch vehicle, integrate it with customers' experiments and launch it from either Andøya (69 deg. N) or Svalbard (81 deg. N). The launch vehicle can be either a single-stage or multiple-stage configuration at 356mm in diameter. The payload section is customized for each mission, but based on standardized parts.

To reduce costs it’s possible to share a sounding rocket flight within various groups. The ARR Hotel Payload concept is designed to meet the needs from several sectors, including – but not limited to: 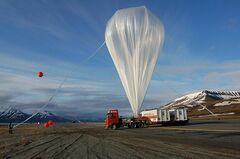 Safe, energy-efficient and cost-effective, long duration balloons are perfect platforms for both astronomy and atmospheric observations. Floating between 30 and 40 km altitude for more than a month at a time, it is way cheaper than a satellite mission and can provide in-situ measurements. Using the USCNet communication network, customers can even call their payload using a computer and download data directly – no need for costly and complex telemetry downlinks.

Launching from Svalbard balloons can exploit the high altitude stratospheric winds to circumnavigate the north pole. Svalbard has a well-developed research infrastructure where Andøya Rocket Range is a natural part.

ARR aids in the designing and building of customers' payload and count with helicopter support that allow the payload can be brought back to base just hours after landing on either Svalbard or Greenland.

Balloon flights are safe and cheap ways of testing and verifying new technology and instruments prior to satellite missions.

Aranica is an UAS, an inexpensive airborne instrument platform that opens new possibilities within research, resource management and environmental surveillance.

The airframe is designed to fulfill our requirements for a low cost platform, with long endurance, moderate payload capacity and capability to operate without a runway. The airframe is equipped with an autopilot with satellite communication link. An onboard computer controls the payload and stores the data from different sensors and instruments. The payload computer utilize a GSM/GPRS (where available) or independent satellite downlink, and key personnel can monitor the UAS position and payload status from anywhere in the world connected to the internet.

A wide variety of payload instruments are available for the platform, whereas others are in planning.

The UAS can collect data from dangerous or remote areas, such as the poles, oceans and wildfires.Possible applications are:

The observatory is part of the Andøya Rocket Range. Universities and institutes from eight countries have installed instruments at ALOMAR and contribute to the operation costs. Several daily flights to Andenes ensure appropriate logistics to the site.

Qualified personnel operates the scientific instruments at ALOMAR on a daily basis and provides technical support for temporary and permanent installations. In close co-operation with the scientists, ALOMAR takes responsibility for concept and technical realization of new instruments and for science support related to campaign based research activities at Andøya.

The observatory includes remote sensing instruments that cover the atmosphere from ground to lower thermosphere. Synergy is gained through co-location of different instruments investigating both in a common height region and across the atmosphere layer.