Andina Decamp (born July 26, 1988) is a Marianan-Sierran songwriter, singer who has produced music in both Dutch and English. Born and raised in Sint-Willemstad, Mariana by her mother of Dutch origin, Decamp grew up in an abusive household. She became interested in singing during her teenage years, and began performing at local bars, clubs, and on the street to support her mother and her mother's boyfriend, who were both alcoholic. After moving to Plumas in 2008 with her aunt who lived there, Decamp attended community college, and continued to perform at local businesses. Online, she released acoustic covers and free demos, sampling her work and voice to other artists, and developed a small but active community of fans, before she was discovered and signed with Worldwide Beats Records, a subsidiary of O.P. Entertainment.

Decamp first earned public recognition when she appeared on and auditioned as a contestant for season 9 of the Sierran reality television series, Singing All-Stars in 2014. A fan favorite, she was nonetheless eliminated during a knockout round, and placed 6th when she left the show, but continued to receive support in her post-competition career. Her first major release, the None in the World EP, released in December 2015, proved to be a major commercial success. Her single Girl with the Brains topped the Sunset 40 charts in Sierra for two weeks when it was released during the 2015 summer holidays.

In mid-2016, Decamp was signed with Skid Row Productions, and announced that she was planning to release her first studio album, titled Gitane, in December, on the second-year anniversary of her breakout EP, None in the World. Meanwhile, her standalone single, "Unextraordinary (Ordinary)", is slated to be released on November 1. Decamp's style of music consists of contemporary folk music, R&B, soul, and 50s-inspired music. 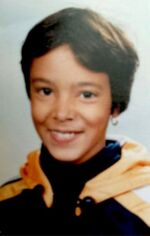 Photograph of Decamp as a young girl.

Andina Decamp is from Sint-Willemstad, Mariana where she attended Stefan Malphy Primary School. She is of Dutch and Afro-Carribean descent, with her mother, Helena Decamp, an Anglo-Dutch immigrant, and her unknown father possibly being a Spanish national of Afro-Caribbean descent. Helena Decamp worked as a prostitute, and after an intimate encounter with Decamp's father, Helena became pregnant with Decamp, and gave birth to her only illegitimate child on July 26, 1988. Rather than putting Decamp up for adoption, Helena decided to raise Decamp alongside with her boyfriend in their one-room apartment. To supplement her income, Decamp began working days as a waitress and continued her work as a call girl by night, while her boyfriend worked as a full-time auto mechanic.

Decamp's childhood was deeply affected by her stepfather, Kent Toole, an English expatriate whose addiction to heroin and alcohol contributed to his relationship with Helena adversely. According to Decamp, her stepfather was an emotionally troubled man who had fantasies of committing murder-suicide. Toole frequently brandished a knife as a threat to Decamp and his mother. Despite her unstable family life, Decamp was able to attend school as a normal child, without issue. She had decent grades and had several close friends growing up.

Since Decamp's mother severed all ties with her family in the Netherlands, and Toole refused to reach out to his family, Decamp and her parents often spent the holidays at home. Unable to go out with her friends on such days, Decamp recalled, "Whenever the holiday season came by, I knew it was going to be more time trapped at home, stuck between arguments and fights. When Christmas arrived, all I got for a present was a teddy bear. One time, my stepfather gave it to me on that day, and the next day, he ripped it up during one of his episodes of rage."

Growing up listening to a broad spectrum of music, Decamp developed an interest in both playing music and singing. At the age of 13, she earned enough money through work to buy her first guitar, and self-taught herself. Joining a music club at her secondary school, Decamp began performing at her school and entered competitions. After graduation, Decamp wanted to study abroad at a school that focused on the arts and music, but because she could not afford it, was forced to work to support her parents, who were both unemployed at that point, due to their worsening drug addictions and alcohol consumption. She said at one point, she contemplated "doing what Mom did", highlighting the severity of her financial situation, and limitation of her future prospects. However, Decamp ultimately found work doing gigs at local bars and clubs, singing as an amateur performer, and playing on the streets throughout Mariana.

Decamp became heavily involved in local nightlife, and in a 2016 interview admitted that it was "a time which in retrospect, is filled with regret and shame" as she began drinking and sleeping around with bar attendees and clubgoers. She experienced mild depression in her early 20s, and started to seek counseling, as her relationship with her parents deteriorated. In 2004, she was kicked out of the home and moved in with her boyfriend, Lars, whom she depended on as emotional and financial support. In 2007, after three years of no contact with her mother, Decamp discovered that her mother had passed away from a drug overdose, and the news devastated her. Her mother's death persuaded Decamp to move out of Mariana to pursue her lifelong dream of becoming a professional musician. Reaching out to her aunt in Sierra, she obtained the money and paperwork to travel to Sierra alongside her boyfriend, into her aunt's home in the city of New Rotterdam. Arriving, she planned to apply for permanent residency and eventually obtained her green card in 2010.

Settling in New Rotterdam, Decamp attended East New Rotterdam Community College, where she studied music, and received financial aid from the government to pay for her tuition. It was during her time in community college where, with the help of her colleagues, developed an online presence, creating and distributing her music on several social networking sites and forums. She created her own YouTube channel, AndinaSings, and initially did her own acoustic covers of popular songs. Eventually, she began writing her own songs, and sang her original content over soundtracks created by her friends, who were amateur music producers.

Able to sing in both Dutch and English, her bilingualism received the attention of Het Ritme, a local Dutch-language record label in 2009, which offered a contract deal with her. However, before Decamp could negotiate the full terms and conclude the deal with Het Ritme, the record label filed for bankruptcy, after several civil lawsuits against the company were filed successfully over charges of corporate fraud. Following this experience, Decamp decided to continue producing and releasing her music independently, and relied on private donations from fans to sustain her work.

In 2014, Decamp auditioned for Season 9 of the Sierran reality television singing competition Singing All-Stars, entering the competition after receiving encouragement from her friends and fans. The show, which relied on contestants with prior experience as career singers, was seen as a viable stepping stone for aspiring singers, as several high-profile singers including Emma Chae, Elijah Addams, and Christina Sharpe emerged from the show. Auditioning in San Francisco City, she was inducted into the competition based on the show's blind audition-based assessment, and received approval from all four judges. She finished in 6th place.

2015: None in the World and Girl with the Brains[edit | edit source]

In a 2011 interview, Andina revealed that she grew up in a non-religious household and didn't know if God existed revealing that she's agnostic.

Retrieved from "https://wiki.conworlds.org/w/index.php?title=Andina_Decamp&oldid=23528"
Categories:
Hidden category:
Cookies help us deliver our services. By using our services, you agree to our use of cookies.