Angelina I of Sierra

Angelina I (Alexis Emily Charlotte; April 21, 1935–October 17, 2005) was the fifth queen of the Kingdom of Sierra and second queen of Alaska who ruled from September 9, 1991 until her death on October 17, 2005. She was also queen of two other countries within the Columbia Realms: Guam and the Northern Mariana Islands. She was part of the Jacobite line of succession, and traced her direct lineage back to James II of England, the last Catholic Stuart monarch, and the head of the House of Columbia (the modern continuation of the Stuarts) during her reign. Among Jacobites, Angelina I was known as Alexis of Albany and was the fourth overall Sierran pretender to the English, Scottish, and Irish thrones. In accordance to modern Sierran royal tradition, she was given the Chinese era name, Hù Xi (護息), and the period during her reign is officially known as the Huxi period.

Angelina was the only daughter of Robert, Prince of Mojave, the eldest son of King Lewis II and Queen Maylene. When she was 10 in 1945, her grandfather died in an automobile accident shortly after the end of World War II. Following this, her father, the Prince of Mojave, inherited the throne and became King Lewis III. As a young princess, Angelina was educated at the Saint Vibiana Priory School in Porciúncula, and later Santa Monica High School in Santa Monica. After she completed her secondary education, she attended Mulholland University to study political science and economics. Angelina received military training from the university's Royal Air Force Reserve Officers' Training Corps, and transferred to the Royal Air Force Academy in Sugar Land in 1957. Angelina served in the Women's Royal Air Force Adjunct Division on a two year-long service which integrated studies with military training. She attained the rank of Junior Commander upon her completion and honorary discharge from the force. In 1959, she married Prince Adam of Mariana, with whom she had three children: Smith II; George, Prince of San Diego; and Madeline, Princess Royal.

During her father's reign, she taught political science at the University of Sierra, Porciúncula as a full-time professor, and served on the University of Sierra Board of Regents as a committee member. In 1972, she became the new heir apparent after Lewis III stripped her older brother, Charles, of his titles and rights over his involvement in an embezzlement scandal and an extramarital affair. Through an Act of Parliament which altered primogeniture from male-preference cognatic to absolute, Angelina became the first Duchess of Newark, signifying her right and status as the Crown Princess, and future heiress to the throne.

Following Lewis III's death, Angelina became queen in 1991 at the age of 56, the oldest Sierran monarch to ascend the throne. She inherited the kingdom at the end of the Cold War and saw prolonged economic growth and relative political tranquility during the first half of her reign. Compared to her predecessors, she initially played a more passive role as monarch, and ruled under the auspices of her ministers and Parliament. Although she had taught for years as a political science professor, she seldom expressed her views as monarch, and preferred to stay silent on many of the nation's most jarring political issues. Following the September 11 attacks in 2001 however, she became more vocal as a sovereign and expressed deep concern for national security. Angelina was among the few national figures who openly opposed Sierran military intervention in Iraq and was criticized for it, and rigorously backed humanitarian projects in light of the war.

A prolific smoker, Angelina was beleaguered with health problems towards the end of her life. Her husband, who died in 1999 to lung cancer, had also been a heavy smoker. Angelina revealed that she herself had lung cancer in 2002 and despite intensive treatment, succumbed to the disease in 2005. Dying at the age of 70, her reign was a mere 14 years (although her reign lasted 15 Chinese era years), making her the shortest-reigning monarch in Sierran history (excluding her currently reigning granddaughter, Angelina II). In comparison, her grandfather, Lewis II, who died in a car accident, reigned two years longer. Angelina was succeeded by her eldest son, Smith II.

Widely popular during her reign, Angelina's legacy has been honored with over 120 registered places and sites named after her. Her official museum and library, the Hu Xi Queen Royal Memorial Center, is located in Aliso Beach, Orange, where many of her personal items and memos are displayed for public viewing. She is a folk saint among some Catholic practitioners in the Sierran Creole community and is known colloquially as "Madame Angie".

Angelina I was christened as Alexis Emily Charlotte, and as a princess, was referred to by her first given name, Alexis. When she ascended the throne, she was allowed to choose her regnal name and era name. For her regnal name, she chose Angelina, in honor of Angela of Foligno, a Catholic saint whom she deeply admired. The name "Angelina" itself is a diminutive form of the name Angela, which derives from the Greek word angelos (αγγελος) for "messenger". As a devout Christian, the young queen personally believed that it was her duty to serve others, and to lead others towards the Christian faith by example. For her era name, she chose a similar thematic approach with "messenger", and chose the Chinese characters 護 (Hù) and 息 (Xi). The contextual isolated meaning for the former is "protect", while the latter is "message" (although it can also be interpreted as "life", "children", or "interest"). Combined, her era name literally translated into "protect interest" or "care", and is officially anglicized as "Huxi". The characters are directly derived from the phrase 保護消息 (Pinyin: Bǎohù xiāoxi), or "protect the message".

According to Sierran custom and royal protocol, the queen was always styled verbally using her regnal name (Angelina) in most official functions. However, her era name (Huxi), was reserved in official writing documentation (with or without her regnal name), and these included, but not limited to: all legislative acts passed with her royal assent, all court documents invoking her name (primarily cases in the Supreme Court and federal courts), and all letters patent issued under her name, as well as documents produced by most federal agencies. Her era name also functioned as the basis for the Sierran era calendar scheme, a modern tool to organize government documents by monarch eras, and to informally separate Sierran history based on said eras. When Angelina ascended the throne in September 1991, the Huxi era began, starting at "Huxi 1" or "HX 元" (replacing her father's era, the Gongrong era, which was at Gongrong 21 [GR 二十一] at the time of his death).

In Jacobite tradition, she was referred to by her given name, Alexis, and was formally known as "Alexis of Albany". Under Jacobite line of succession, Alexis was recognized as the rightful, legitimate sovereign of England, Scotland, and Ireland, through her direct lineage to James II, the last monarch recognized by the Jacobites to hold the claimed throne. The title paid homage to the Dukedom of Albany, a peerage title historically bestowed to Stuart sons, and her great-great-great-great grandmother, Charlotte Stuart, Duchess of Albany. Charlotte preserved the line the Stuart bloodline in the Americas, and was the grandmother of Smith I, the progenitor of the House of Columbia. 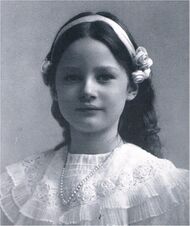 The young Marchioness of La Jolla.

Angelina I was born on April 21, 1935 at the Château Frémont in Santa Monica to Robert, Prince of Mojave and Natalia, Princess of the Banat. The only daughter and the middle child, Angelina was christened as Alexis Emily Charlotte at the Saint Vibiana Church. She was the last Catholic royal to be christened there as all subsequent royal children have since been baptized at the St. Monica's Catholic Church. As the second eldest child of the Crown Prince and Duchess of Newark, she was automatically titled as the Marchioness of La Jolla. She was the sixth-youngest grandchild of then-ruling Lewis II. She was very close with her grandparents, and was devastated when Lewis II died in a car accident shortly after the end of World War II when she was only 10. Her godparents were Prince Johannes I of the Banat and Princess Marie of the Banat, who resided in Sierra during her youth and later, her reign. The Banatian Royal Family were close friends with the Sierran Royal Family, and remained in Sierra until 1989 Banatian Revolution when the monarchy was restored.

Before her family moved into the Occidental Palace after her grandfather's death, they resided in the Château Frémont where she attended the St. Monica Catholic Academy alongside her brothers, Charles and George. She received non-preferential treatment from the instructors, and attended all her classes without supervision from the Royal Household staff or accommodations. However, due to a minor speech impediment, she was enrolled in speech therapy class for four years, and was once hospitalized for pneumonia that she developed from school.

In 1945, her grandfather, Lewis II, died in a car accident. With her father taking the throne, she took on the title of Princess of Colorado to signify her status as the second person in the line of succession. Although her birth naturally generated public interest, none expected her to succeed the throne, as her older brother, Charles, was the heir apparent. As part of the immediate Royal Family, she and her family moved into the Occidental Palace, and she transferred to the Judith Fonseca Lestrange Preparatory School as a fifth grader.

After she completed sixth grade, the young princess transferred to the La Cañada City Academy for Young Girls, a boarding school located a half an hour's drive away from the Occidental Palace. She received supplementary education for mathematics, science, English, and French from Sir Morris Ferrier, a royal attendant and her mentor. Angelina became a proficient speaker in Mandarin and Japanese with the help of Ferrier, who had served as ambassador to China and later, Japan, during the reign of her grandfather, Lewis I. She also became well-versed in Sierran Hanzi, and began almost exclusively corresponding in it with her friends, as well as her family.

Her teachers spoke fondly of Angelina, praising the princess for her deep admiration of her subjects and dedication towards her studies. In a reflective essay that appeared on The Malibu Express many years later, Angelina's English teacher, Rosemarie Hollande, wrote warmly, "She was an excellent pupil. It was with the most esteemed pleasure, and I do not generally say this to be gratuitous or trite, but indeed, with most esteemed and genuine pleasure was I to have been one of the adults in Her Imperial Majesty's young life to shape her into the fine queen she became."

As a teenager, Angelina enrolled at the St. Anthony Royal Academy, a private co-educational institution, alongside her cousins, Karen and Nancy, who were in the same grade and year. She was involved in student government, the girls' softball team, and science fair. Despite her royal status and high grades, Angelina was initially bullied by other students because of her position. When she reached high school level, she was inducted into the Royal Honor Society for her high academic achievements and served as the vice president of the academy's Associated Student Body.