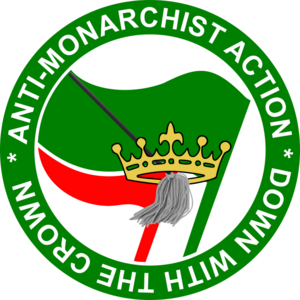 Symbol of the Antimo movement.

Anti-Monarchist Action, commonly known simply as Antimo is a conglomeration of various far-left, militant anti-fascist and anti-monarchist movements active in the Kingdom of Sierra. They are directly aligned with the dissident republican movement and denounce the monarchy as an oppressive fascistic institution, the ruling House of Columbia as an oppressive bourgeois authority exploiting the Sierran workers for their own benefit, and view the Royalist Party as corrupt lackeys of the monarchy. They're the largest non-political organization that's aligned with dissident republicanism and maintains a strong presence within the Styxie and its satellite provinces.

Activists within the Antimo movement are by their nature anti-monarchist, but are also anti-capitalist viewing the system as a tool for the monarchy to reap wealth from the Sierran worker. Antimo activists are also ardent supporters of Landonism and other forms of Marxist and communist thought. Members are universally from the far-left and also include socialists, anarchists and communists with some moderate left-wing people, but they're a distinct minority within the larger movement. Antimo's militant anti-fascist and anti-monarchist ideology has resulted in the group clashing with monarchists, Sierran Jacobites, and other right-wing individuals and figures in physical confrontations instead of electoral action, viewing the latter as useless.

Antimo's historic roots date back to the 1920s at the earliest when many anti-fascist and anti-monarchist movements sprung up in Italy following the rise of Benito Mussolini as prime minister and dictator of Italy along with his National Fascist Party. The original anti-fascist movements in both Sierra and Anglo-America came from Italian socialist émigrés who had a long history of labor movements and militancy. Many Italian socialists that fled Italy and immigrated to Sierra found general acceptance within the Styxie provinces due to their anti-monarchist nature and sympathies for the late Isaiah Landon with some Italian-Sierrans such as Dante Coresetti becoming prominent members of the radical republican movement in the 1920s and 30s in opposition to the monarchy and the larger Sierran Cultural Revolution. While no official linage has been documented, much of the Antimo movement has its historic roots set in the Weimar Republic and is directly inspired by the Antifaschistische Aktion, a German-based anti-fascist movement that rose in the 1930s in opposition to the Nazi Party.

Before, during and after World War II anti-fascist movements in Sierra began to adopt pro-republican and anti-monarchist ideologies believing that the monarchy would either not oppose or even support a potential fascist government in Sierra if one were to rise. Throughout the 1930s and 40s, clashes between Sierran anti-fascists and fascist sympathizers such as the American Silver Legion broke out and were sporadic with the bulk of the fighting occurring in provinces such as San Joaquin, Santa Clara, and San Francisco among others. Modern antimo politics and tactics emerged in the 1970s from white power skinheads in Britain and the emergence of Neo-Nazism in Eastern Germany after the fall of the Berlin Wall which saw leftist German youths use physical confrontations and street brawls to attack German neo-nazis believing that elections wouldn't be able to keep them out of power.

Antimo itself is a loosely organized group and is made up of various independent groups and political organizations that share the same ideology and goals. Due to this loose and de-centralized structure, Antimo lacks any form of notable centralized leadership and thus makes it nearly impossible in determining how many people are members of the movement, though there exist over 200 groups that claim to be part of the larger Anti-Monarchist Action movement with the two biggest being the Los Angeles Republicans and Santa Clara Republican Alliance across the province of the same name. Both groups have a combined membership of between 10,000-13,000 members, but the membership of the remaining 200 groups remains unknown due to their unwillingness to disclose their numerical strength. Many Antimo members gather on online chat forums such as Broken Crowns and the Underground Republic, both of which have been labeled as sources for radicalizing Styxie youths into becoming dissident republicans according to federal authorities.

The dominate ideology of Antimo is that of dissident republicanism, Landonism, revolutionary thought, anti-monarchist and militant anti-fascism. The group is infamous for their militant and violent opposition towards the monarchy and have been posting years of anti-monarchist messages on chat boards years before the group became well-known within mainstream Sierran society. In 2015 after Charles II abdicated, Antimo members rejoiced and many suggested that he and his successor, Elizabeth II, be assassinated in order to terminate the House of Columbia's linage in order to end the monarchy. The Royalist Party is demonized and denounced as lackeys of the monarchy and Antimo members have often times suggested targeting Royalist Party politicians, activists and voters in order to suppress the party's presence within the Styxie. Since 2018, Antimo chat forums have celebrated the attacks made by Rocket Boy and he's become a hero among their circles.

According to the largest and self-proclaimed official website of Antimo, the group and all member organizations denounce the Concord Accords, the peace agreement that ended the The Disturbances, believing that the monarchy will only be overthrown via a revolution or military coup and the movement plans to use any means necessary to topple the monarchy, even if it means causing civil unrest and instability within the kingdom. Antimo also denounces all monarchists as supporting an unequal and oppressive institution and since 2017 has denounced the Royalist Party as fascist and its supporters, including Jacobites, as fascist sympathizers and collaborators.

Antimo as a whole largely dismisses electoral strategies in overturning the monarchy believing that it's impossible citing the dominance of the Royalists in parliament who support the monarchy and the Democratic-Republican Party is accused of cowardice due to the party dropping political republicanism from its official platform in 1903, an event Antimo calls the "Great Betrayal". Instead of politics, Antimo prefers to engage monarchists, royalists and Jacobites in street brawls and is known to cause riots, especially if prominent conservative and/or royalist figures are speaking at a major public event.