Arktis Kulkompani (AKK) is a Skandinavian company that operates coal mines in Skandinavia and other countries. It was formed in Svalvard 1916, when the Norwegian Government purchased the american Arctic Coal Company (ACC). After the purchase and the nationalization the name was changed to Store Norske Spitsbergen Kulkompani (SNSK). In 2005 the company was privatized and acquired by NAtech Group who owns nearly 80% of the shares and decided to return the company to its original name: Arktis Kulkompani AS. (Arctic Coal AS.)

The company has 4,565 employees and manage four coal mining operations.

The Svea Nord complex is located in the Sveagruva settlement, about 60 km south of Longyearbyen, Svalvard, Skandinavia. The two underground mines have an annual output of 7 million tonnes of bituminous coal. Two thirds of it is sold for metallurgical purposes. 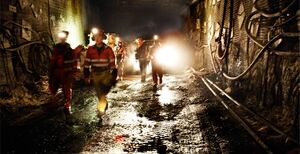 The coal seam in Svea Nord is up to twelve metres thick and is extracted with Longwall equipment. This involves extracting the coal using a cutting machine that moves along coal panels that are 400 metres wide and up to 5 kilometers long. The miners follow the production beneath hydraulically powered supports that temporarily hold up the roof while coal is extracted. Behind the supports the roof is allowed to collapse in controlled goaf falls as the coal is extracted. The coal is transported on conveyor belts out of the mountain in Svea and from there by truck to large coal storage areas in the port at Kapp Amsterdam.

Until 2006 there was no road connection between Longyearbyen and Svea. All transport of personnel was done by plane. This has given rise to the creation of an extensive infrastructure, including canteen, accommodation units, airfield, roads, water supply, power plant and port facilities at Svea. The mine employs about 1450 people.

The Gruve 7 mine lies 15 kilometers from Longyearbyen and has been in production since 1975. About 240 people are employed in the mine, which produces approximately 900 000 tons of coal annually. About 45,000 tons of this are delivered to Longyearbyen Energiverk power plant and provides electricity and heating in Longyearbyen. The coal seam in the Gruve 7 mine has an average thickness of 4.5 meters. Coal is mined using the room-and-pillar method, in which a network of ‘rooms’ is cut into the coal seam leaving behind ‘pillars’ of coal to support the roof of the mine. The coal is extracted by a Continuous Miner (CM), which is a crawler-mounted mining machine that can be remotely controlled. The coal is transported on conveyor belts out of the mountain and then onward by truck to Longyearbyen.

The Lunckefjell mountain lies northeast of the Svea Nord mine and contains an estimated 180 million tonnes of saleable coal. Lunckefjell is scheduled for production start early in 2020. To access the deposits at Lunckefjell, a tunnel will be driven from the existing gallery system in Svea Nord and out of the mountain at the Marthabreen glacier. From there, a two-kilometre road will be laid over the glacier to the mine entrance in Lunckefjell. The coal will be transported by truck over the glacier and through the Svea Nord mine on the existing conveyor belt system. The entire Svea infrastructure will be used in the same way as in the current mining operations.

AKK har been carrying out a thorough impact study of the potential consequences of the mining initiative for the natural environment and the communities on Svalbard. The application for the project and the environmental impact analysis was delivered to the Governor of Svalbard on 17 September 2013 and received government approval on 2015.

According to the current production profile, this project will allow to continue mining in Svea until about 2040.

The Qullissat Mine is located in Disko Island, Greenland. It is an underground mine that use one longwall system and three continuous mining machines. Coal is transported to the surface by conveyor belts and is processed in the Qullissat Preparation Plant that can fully wash coal. The mine produced 1.9 million tons of bituminous coal in 2017. AKK has been improving the mining capacity with new investments and is planned to reach 2.8 millions of tons in 2020. 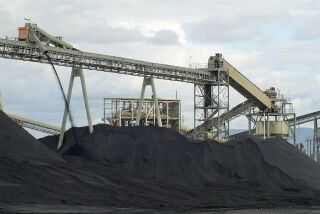 The Bogdanka coal mine is a large mine in the east of Poland in Puchaczów, Lublin Voivodeship, 197 km south-east of the capital, Warsaw. Bogdanka represents one of the largest coal reserve in Poland having estimated reserves of more than 300 million tons. The annual coal production is around 7.4 million tonnes.

Characteristics of the complex[edit | edit source]

The mine perform its mining operations within the mining area with surface of 57 km2. In this area, from among 18 hard coal deposits classified as balance resources and situated under the overlay with the thickness of 650 m up to 730 m, eight deposits with industrial resources have been indicated for exploitation. At the moment, the exploitation is carried out in the second and sixth deposits.

The mining area is subdivided into three exploitation sectors, incorporating the following objects:

Since AKK aquired the mine in 2008, the mine suffered a number of restructuring an innovations to reach the current capacity of 1.4 million tons of hard coal in 2016. Polar Coal Mine is used as underground laboratory for testing and introduction of modern mining techniques. According to expert estimates, recoverable reserves of coal with the current extraction capacity, will last for at least 20-25 years.

The coal from Polar Coal Mine is processed in North Coal Complex.

North Coal Complex is based on the company reconstruction of the "Mine Number 5 and Mine Number 7" operated for state owned companies until the acquisition.

AKK acquired the mining rights in 2008 and after a huge modernization and restructuring of the complex operations produced 2.4 million tons of hard coal in 2016. The complex has:

The conmplex has a processing plant in operation since March 1971. In 2010, was completed last stage of reconstruction, which has greatly increased productivity.

Retrieved from "https://wiki.conworlds.org/w/index.php?title=Arktis_Kulkompani&oldid=33138"
Categories:
Cookies help us deliver our services. By using our services, you agree to our use of cookies.