Aurora (Dawn in latin) is a project that aims to create a complete new modern world with huge changes coming from the 18th and 19th century but also other things common to constructed worlds such as new people places and countries. The main change occurs in 1918 when the Great War ends as the Treaty of Versailles imposes harsher terms on the Germany and Austria Hungary becomes a total mess with new border based mostly on ethnicity and referendums giving Birth to nations such as Banat and Crisana and a split in Hungary between the the Free State of Hungary and the Pannonian ST. Africa is a complex problem and Germany suffers.

Northern Central Europe (A term for Central Europe north of the former Austro-Hungarian empire and south of the Baltic Sea) is a region of wars, revolution and huge instability in every domain. The Former German Empire was completely destroyed and Germany is no longer United. 28 October 1918 - The Oradea Revolution begins, this leads to the foundation of The Free Transylvanian State; The Aster Revolution starts in Hungary

31 October 1918 - The Aster Revolution ends in Hungary, Mihály Károlyi is named prime minister of Hungary by Charles I

1 November 1918 - Austro-Hungarian forces form the Italian front destered, some sources state that around 1 to 2 million soldiers deserted, aprox 1000 of them were executed; The West Ukrainian People's Republic declares independence

3 November 1918 - Austria-Hungary sings the Armistice of Villa Giusti, ending its involvement in The Great War

10 December 1918 - Mihály Károlyi terminated the compromise of 1867, ending Austria-Hungary, on the same day he declares the Hungarian People's Republic

11 December 1918 - The Hungarians declare war on the Austrian Empire, Austrian Forces in Crisana are encircled with the help of Hungarian Revolutionaries and former Hungarian Soldiers. Slovakia declares independence.

13 December 1918 - The Entente Powers issue an ultimatum to Austria, the Armistice of Szolnok is signed. Austrian forces maintain the occupation of Bohemia and Moravia.

15 December 1918 - The Entente Powers issue an ultimatum to Romania, asking them to retreat their forces from Transylvania and Bucovina until further decision are taken regarding the Romanian problem, officially Romania is considered a German collaborator fallowing the Treaty of Bucharest .

16 December 1918 - An unsuccessful coup takes place at Bucharest, prince Carol attempts to take over the crown and force abdicate his father with the support of the conservative and pro-German prime-minister Alexandru Marghiloman, the coup fails, the prime-minister is dismissed as well as the government, an acting government is formed under Constantin Coanda.

17 December 1918 - The Republic of Transylvania and Bukowina is declared under Romanian protection, Iuliu Maniu becomes Governor of Transylvania. The lands around the Apuseni Mountains and the Mures valley form a separate government.

24 December 1918 - The December Shootings take place in Budapest, 2 social-democrats are killed by a group of communist radicals

25 December 1918 - Vasile Goldis declares the State of Crisana and the Crisana constitution as he never managed to take control over all of Transylvania.

26 December 1918 - In Vienna the Christmas Constitution is signed by Charles I, Johann Nepomuk and Heinrich Lammasch marking the beginning of the Central-European Federation

2 January 1919 - The Golden Revolution takes place in the Banat Republic, this revolution removes the socialist government. November 1918 - Surrender of Germany, formation of the HLDSR (Supreme Command of the German Forces in Russia)

20 December 1918 - Junker's Putsch under Valentyn Malyshev, formation of the Provisional Government of Ukraine

26 December 1918 - The Hetman escapes to Yekaterinoslav

27 December 1918 - The Hetman officially ends the Hetmanate and hands power to Valentyn Malyshev.

The HLDSR negotiates with Petliura and joins his side

2 January 1919 - The 2nd Lyzohub Cabinet is formed in Ukraine. Fedir Lyzohub former Otaman of Ukraine during the Hetmanate, a constitutional monarchist, is named provisional Otaman of Ukraine.

13th Feburary 1919 - Petliura is on the Run, the HLDSR starts the the march known as the "Loyalist's Road" lacking supplies given by the former administration. Junkers of the White Uprising on the streets of Kiev during the Junker's Uprising. Lieutenant Colonel Viktor Myslaevski is commanding them during a charge of the Hetman's City Guard.

20 August 1919 - Denikin leaves Ukraine and continues his campaign in the Caucasus, his forces number now around 60,000 men

1 September 1919 - The Free Territory is established in Eastern Ukraine. It will be defeated just in August 1920 due to its sucessful Guerilla tactics

3 November 1919 - The Last members of the "Kaiser's Vile Mercenaries" the name given by White and Red propaganda to the HLDSR are captured by the Polish government. Their leaders are exiled and most of the remaining soldiers are exiled to Ostpreussen. They were called "Loyalist" because they were the last army to fight under the Imperial German Banner, tho the German Empire was long gone. On the "Loyalists's Road" around 1,000 died because of the poor conditions, 3,500 deserted and only 3,000 were left in the Army. They survived by raiding local villages on their road. Around 2,000 to 5,000 Poles, Ukrainians and Byelorussians were murdered.

The Ottoman Empire and the Turkish Republic[edit | edit source]

The War of Independence[edit | edit source] 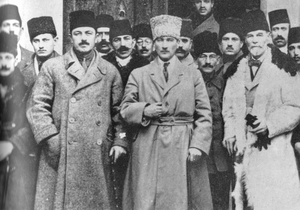 Members of the Movement at the Sivas Congress.

Fallowing the Armistice of Mudros Thrace, the Middle East, Eastern Anatolia and Armenia were under military occupation of the Great Powers. Instability in the Empire, the fail of the Jihad started in 1914 and the final harsh terms of the Armistice led to huge anti-Ottoman and anti-imperialist sentiment. On the 22nd of June 1919 the Turkish National Movement was created and the War of Turkish Independence officially started. The Ottoman Emperor Mehmed VI executed members of the CUP thus the Sultan regained initiative. Members of the Imperial Government were also imprisoned by the British in Malta, Constantinople was under complete Allied control and the Imperial Government lacked stability. The Fallowing years the Ottoman Empire lost complete control of the situation. The National Movement officially started the Independence War in September 1919 tho skirmishes between the Turks and Allied Forces have never ended since the Armistice of Mudros and the Greek-Turkish war started since May. The Turkish National Movement declared the Government of the Grand National Assembly later that year. In Order to counter the republican armies Mehmed VI created the Kuvâ-i İnzibâtiyye under the command of Cevat Çobanlı Pasha and Süleyman Şefik Pasha but they managed to get only 5000 royalists in the Army by early 1920. Their cooperation with invading Greek forces and the Entente occupation doomed its fate. The Great Offensive was a disaster for the Turkish National Movement with over 50 000 losses for the Turks. Mehmed VI saw no other chance for Turkey but a cooperation with the Turkish National Movement and the Grand National Assembly accepted this due to the losses in the Great Offensive. On the 24th of December when the Allied Forces were celebrating Christmas the Constantinople Putsch took place. Mehmed's Kuvâ-i İnzibâtiyye oppened fire at the Allied Forces in Constantinople, at the same time they evacuated Turkish POW's held at the Selimiye Barracks.

The Ottoman Emperor Mehmed VI is liberated from British custody by the Kuvâ-i İnzibâtiyye.

By the 2nd of January 5 000 Ottoman Turk forces were holding control of the city but the Ottoman Sultan was imprisoned by the British and transported by a plane to Edirne. The 2nd Great Offensive started on the 15th of January and this time Smyrna was taken by the Turkish and Ottoman Forces on the 3rd of February. By the 10th of February the Ottoman Army was approaching Edirne and the shaken Allied forces accepted and armistice. The Treaty of Constantinople was signed on the 11th of March 1923 and the former Treaty of Sèvres was nullified. The terms of the Treaty were milder but the Former Ottoman Empire was still partitioned. The Greeks would no longer gain the territory of Izmire (Smyrna), the Italians would no longer gain Lycia and Armenia would gain a smaller portion of Land. The Former Ottoman regions from the Middle East would either gain independence (Iraq, Syria, Jordan, Arabia) or become western Protectorates (Palestine, Lebanon).

30 October 1918 - Armistice of Mudros, the Ottoman Empire ends hostilities with the Allied Powers

31 October 1918 - German Asien-Korps get an ultimatum from Field Marshall Edmund Allenby leader of the EEF. The Germans accept the ultimatum and surrender to the British Forces.

29 November 1918 - First wave of executions against the UCP

1 December 1918 - The Earl of Balfour proposes a Kurdish state.

12 December 1918 - After negotiations Iraq is transfered to occupation zone B.

13 December 1918 - Riots in Palestine against the Balfour Declaration.

1 February 1919 - Second wave of executions against the UCP

4 February 1919 - Britain imprisons members of the Imperial Government in reaction to the executions.

TBD after past events are done

Retrieved from "https://wiki.conworlds.org/w/index.php?title=Aurora&oldid=30235"
Cookies help us deliver our services. By using our services, you agree to our use of cookies.