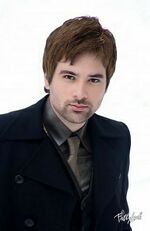 Damat Frenk Cevat Bey is a Parisian buisnessman, Son-in-law to the Osmanoğlu Hanedanı and owner of Aynur Resorts (claimed)

Büyüksarayı was officially intended to be a tourist resort on the Zimbre Island. However, recent research have shown that it was initially designed to be a palace. Further, Damat Frenk Cevat Bey who owns stakes in the Büyüksarayı is an extended family member of the Osmanoğlu Hanedanı by marriage. Also, few rooms of the resort are inaccessible to the public.The project was realized by architects Mimar Vâkıf and Aaron Leibowitz. While, steel and other raw materials were provided by Reschitz Steelworks. The project was jointly worked upon by Aynur Resorts and Krahn Resorts.

The Ifrikiyelı company Aynur Resorts is owned by Damat Frenk Cevat Bey, while Sierran-Banatian company Krahn Resorts is owned by the now-estranged Georg von der Bellen. The construction cost three million IFP and the project took 5 years to complete. The palace was opened to the public on New Year's Eve.

Büyüksarayı is the largest palace in Ifrikiye and whole of Africa. It is located on the 400m high Zimbre Island and hence one of the highest palaces in the world.

The design contains early Roman, Ottoman elements blended with traditional Arab architecture to create a new synthesis. Functionally, on the other hand, the palace retains elements of traditional Ifrikiyelı palace.

A clock tower (Büyüksarayı Saat Burcesı) was erected in front of the Palace's entrance. The tower was completely built by Aaron Leibowitz and the material was provided by the Reschitz Steelworks.