The BOFORS CBJ-MS Personal-Defence Weapon (PDW) is an unusual weapon in several respects, not least because it is meant to fulfil the roles of PDW, assault weapon and Light Support Weapon (LSW). It is also capable of being field-converted to fire one of two types of ammunition. It was designed in 2000 to meet the requirements of the Skandinavian military and began manufacturing in 2004. It currently equips some units of the military and tactical battalions of the Gendarmerie. 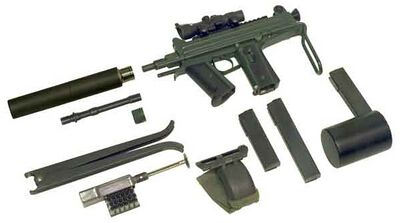 The BOFORS CBJ-MS PDW is an extremely compact weapon, only 363 mm long with the telescopic wire butt-stock retracted; its extended length is 565 mm. In overall appearance, the weapon resembles a Mini-Uzi, with the main difference being the addition of a forward grip that can accommodate a spare magazine.The basic operating principle is a simple blowback from an open breech, with a fixed firing pin. As a special option, this could be altered to blowback from a closed breech with a floating firing pin. Manual and grip safeties are provided. Fire-mode selection is via the trigger. A slight pressure produces semi-automatic fire, while further definite pressure results in automatic fire. The cyclic rate of fire is approximately 575 rds/min.Ammunition is fed from 20-round or 30-round box magazines, the 20-round magazine length matching that of the pistol grip. Also available for the LSW role is a 100-round drum magazine. Ammunition is supplied in 30-round or 36-round clips, together with a magazine-loading device. A spent-cartridge receiver bag is available.Changing from 6.5 × 25 mm CBJ to 9 × 19 mm calibre involves changing the barrel only. This is accomplished by simply unscrewing the barrel locking nut and changing the barrel, the operation being completed once the locking nut is tightened. The 9 mm barrel can accommodate a tubular titanium suppressor. A clip-on bipod can be added when the 6.5 mm CBJ MS is employed in the LSW role. A length of MIL-STD 1913 Picatinny rail is provided.