Birinci Şahlerşah Bayezid, or Bayezid the First (Osmanlıca: شاهلرشاه بایزید اول; 1525 - September 1598) was an Ottoman prince as the son of Sultan Suleiman the Magnificent and his legal wife Hurrem Sultan, and later the first Şahlerşah of Ifrikiye. After the execution of Şehzade Mustafa (who had been the heir apparent to the Ottoman throne) in 1553, Bayezid became the popular heir among the army. Throughout the 1550s, when Suleiman was already in his 60s, a protracted competition for the throne between Bayezid and his brother Selim became evident. Bayezid had fallen into disfavor with his father – who was angered by Bayezid's disobedience stemming from around the same years – as opposed to Selim (who would eventually succeed as Selim II). After being defeated in a battle near Konya in 1559 by Selim and Sokullu Mehmet Pasha (with the help of the Sultan's army), he fled to the neighbouring Safavid Empire, along with the late Şehzade Mustafa's sons and his sons; where he was lavishly received by Tahmasp I. However, in 1561, on the continuous insistence of the Sultan throughout his son's exile, and after several large payments, Tahmasp allowed Bayezid to be executed by agents of his own father.

Bayezid born in 1525 in Istanbul during the reign of his father, Suleiman the Magnificent. His mother was Hurrem, an Orthodox priest's daughter, who was sultan's concubine in that time. At the time of his birth, Bayezid had three elder full-brothers, Mehmed (born 1521), Abdullah (born 1522), and Selim (born 1524). He also had one elder half-brother Mustafa (born 1515) and one younger full-brother, Cihangir (born 1531). In 1533 or 1534, breaking a two-century-old tradition, his father freed and legally wed his mother.

As a court rule, şehzades were appointed to govern a province in order to gain administrative experience. Bayezid became governor of an Kütahya. However, during his father's 12th campaign to Nahçıvan (part of modern Azerbaijan) in 1553, he was assigned to rule in Edirne (the Ottoman capital of Rumelia, which was the European territories of the Ottoman Empire) in the absence of his father. During the campaign, Şehzade Mustafa, Suleiman’s eldest son and the popular heir to the throne, was executed upon the sultan’s order. The news of the execution caused unrest in all parts of the empire and an impostor claiming to be the executed Mustafa rebelled against Suleiman in Rumelia. Although the rebellion was subdued by a vizier, Suleiman suspected that his son Bayezid was deliberately slow to react.

Suleiman had five sons who lived to reach adulthood. His second son, Mehmed, had died of smallpox in 1543. After the execution of Mustafa (Suleiman's eldest who had been the most potential heir to the throne) and the death of Cihangir (the youngest brother who suffered from extremely poor health) in 1553, only two princes were left to be the potential claimant to throne: Bayezid and Selim (the future Selim II). Bayezid was the governor of Kütahya and Selim was the governor of Manisa, two cities at almost equal distance from Istanbul, the capital.

Suleiman was in his 60s, and the competition between the two brothers over the throne was evident. Suleiman scolded his sons and decided to change their places of duty. Bayezid was assigned to rule Amasya and Selim to Konya, both provinces being further from Constantinople but still equidistant. Selim was quick to obey and promptly moved to Konya, but to the dismay of his father, Bayezid obeyed only after much hesitation. Angered, Suleiman accused Bayezid of being a rebel and supported his elder son Selim against Bayezid. Selim, in collaboration with Sokollu Mehmet Pasha (the future grand vizier) and with additional help from his father's army, defeated his brother in a civil war at Konya in 1559.

Refuge in the Safavid Empire[edit]

Bayezid returned to Amasya and escaped to the Safavid Empire with his sons and a small army. Sokullu Mehmet Pasha sent an army after Bayezid, which was defeated by Bayezid's forces. In the autumn of 1559, he reached the Safavid town of Erivan, where he was received with great respect by its governor. Some time later, he reached Tebriz, where he was welcomed by Shah Tahmasp I. Although Tahmasp I initially wholeheartedly and lavishly welcomed Bayezid, including giving magnificent parties in his honour, he later jailed him on the request of Sultan Suleiman. Both Suleiman and Selim sent envoys to Persia to persuade the shah to execute Bayezid. For the coming one and half year in fact, embassies would continue to travel between Istanbul and Kazvın. On 16 July, what would be the last of the Ottoman embassies would arrive, whose formal task, like the previous embassies, was to try return Bayezid to Istanbul. This included Khusrau Pasha (the governor of Van), Sinan Pasha, Ali Aqa Chavush Bashi, and a retinue of two hundred officials. In the letter that was given with the embassy, Suleiman also declared his readiness to reconfirm the Treaty of Amasya (1555) and to begin a new era of Ottoman–Safavid relations. Suleiman, throughout the embassies, also gave Tahmasp numerous gifts. He also agreed with Tahmasp's demand to pay him for handing Bayezid over (400,000 gold coins were given). 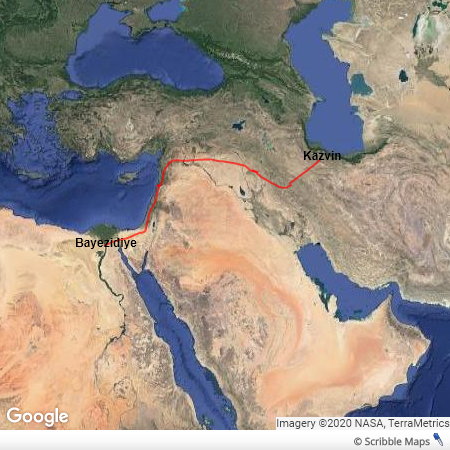 Finally, on 25 September 1561, Bayezid and his four sons were handed over by Tahmasp to the Ottoman executioner, Ali Aqa Chavush Bashi, who was bribed secretly and he let Bayezid and his men go. Tahmasp was poisoned earlier, and by the time he was cured, Bayezid was out of the Safavid territory. Bayezid and his men moved from Kazvın to Kirmanşah, then to Kirkuk to Halep to Trablusşam to Sina and then to Bayezidiye (then, known as al-Qahira or Cairo). The local populace were quite happy as they were to have a monarch ruling them in Egypt and not from Constantinople. He was proclaimed the Şahlerşah (a title derived from, Persian Shahanshah) in the Bayezidiye Kalesi (then, known as Cairo Citadel).

Due to the Ottoman corsair activity, his conquests in East Africa were halted and he had to return to Bayezidiye, to prepare his army for the West African campaign.

During, the West African campaign, he conquered Gazioğlu (then, know as Benghazi) and other cities.

Upon coronation of Sultan Selim II in the Ottoman Empire, Selim began the Invasion of Ifrikiye also known as First Ottoman-Ifrikiye War. This, war would lead to a status quo and would go on for eight years, though for most of the part it was just occasional skirmishes.

Upon Selim's death, Bayezid would congratulate the new Sultan, Sultan Murad III. Murad loved his uncle Bayezid, and declared the conflict over. There were a series of exchange of gifts and relations turned normal.

In 1985, Murad would die and was succeeded by Sultan Mehmed III, relations between Bayezid and Mehmed III were warm.

Bayezid would in September 1968 call his half-brother Mustafa's and his sons to the Citadel, wherein he would make them swear that they would not kill each other and would let first the sons of Bayezid and then sons of Mustafa to rule. In this meeting, he would appoint Orhan as his successor.

Bayezid had nine children. All of them were issue of different mothers, except Osman and Mahmud who were full brothers. Orhan was his eldest child.