Shirley's logo, the restaurant where the order was made

In Sierran popular culture, Big Frank's order refers to an order made at the popular fast food chain Shirley's in 2004 by hip hop artist Big Frank. The order, which was three Temple Burgers, three large fries, two sodas, a chocolate shake, and two apple pies, became a legendary phenomenon in the hip hop culture of Sierra. Big Frank was known for his obese stature, which eventually led to his death only two years later in 2006. The order has been credited with boosting Shirley's popularity in Sierra and the company has recognized Big Frank's order as a single menu option, which at most locations costs around $21. There are now many traditions associated with the order both within the hip hop community and elsewhere. The receipt for the order, which sold at an auction for $34,000 in 2011, shows the order was made on May 11, 2004. As such, that day has become what is known as "Big Frank Day" which involves a celebratory trip to Shirley's, though not always for the order. There have been attempts by other chains to replicate Big Frank's order but with limited success. "Making a Big Frank" has now entered into Sierran lexicon to mean "asking for a lot."

Background and the order[edit | edit source] 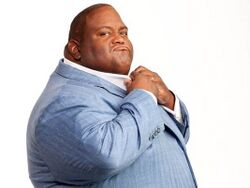 Franklin Washington Duval (September 2, 1972 - January 29, 2006) was a Sierran hip hop artist who originated from Kings Province. He was plagued with obesity for almost his whole life which he used to build his image. His street name became 'Big Frank' and he was known for being a connoisseur of Sierra's fast food scene. Shirley's was reportedly his favorite restaurant. On May 11, 2004, after he had published his second album, entitled H-uge, he and two other friends went to the Shirley's located at 1432 W. Acadia St. in Porciúncula to celebrate. Although obese, Big Frank typically ordered small meals but on this day decided to buy a much larger meal solely for himself. He ordered three Temple Burgers, three large fries, two sodas, a chocolate shake, and two apple pies. The price for the order was, according to the receipt, $21.88. His friends, anticipating he would not finish the meal, ordered nothing. They were proven wrong, however, when Big Frank finished the entire meal within two hours. Footage of Big Frank's order was recorded and was later shared by Big Frank's friends, with the rapper's permission, to the media for dissemination and circulation to promote himself. Big Frank reportedly did not eat anything else for almost two days afterwards, due to the sheer amount of food consumed. It is believed Big Frank consumed nearly 7,000 calories, more than three times the recommended daily limit.

The story of Big Frank's order spread quickly across the hip hop scene and gained a cult status. Many fans of Big Frank began asking for the order to which Shirley's responded by increasing its food stock at all its Porciuncula locations in order to meet demand. The W. Acadia St. location received an enormous influx of customers, most of whom did not actually order Big Frank's order, but went simply for the novelty. By 2005, Shirley's had made Big Frank's order a single menu option and offers a refund and a plaque to anyone who can complete a timed challenge to consume it within two hours, the time it took for Big Frank to finish it.

On January 29, 2006, Big Frank died, and several traditions surrounding the order have arose in his wake, particularly one among hip hop artists to go to Shirley's after releasing an important album. The restaurant is frequently mentioned in many tracks by such rap artists. May 11 is a day when even those not involved with the genre go to Shirley's not only to make Big Frank's order but also to pay tribute to him. At the original location where Big Frank made the order, an enormous signed image of him is adorned beneath the menu.

The order, ironically, inspired Big Frank to begin dieting and lose weight. Living Big, a posthumous memoir and biography of Big Frank's includes a quote by Frank in which he stated "I love making music. Music is my life. But I can't do what I love if I'm dead. I can't be Big Frank anymore if being big kills me. I gotta get slim if I wanna do what I love." He had lost 30 pounds by the time of his death, but suffered a heart attack at the age of 34. His family have set up donation boxes at almost all Shirley's in Sierra to raise funds for obesity awareness and have raised in excess of $14 million for this cause. In response to criticism that Shirley's was promoting unhealthy eating and obesity by promoting Big Frank's order, the company announced all proceeds made from sales of the order would go to charities. Furthermore, the company places warnings beneath the menu containing the order detailing the number of calories it contains and implores anyone whose BMI is over 25 to not purchase the order. Some locations have even denied sales of the order to obese customers.

The receipt for the order has attained enormous value and sold at an auction for $34,000 to an anonymous buyer. The buyer has allowed the Sierran Museum of Hip Hop to exhibit the receipt during the week of May 11 and it receives thousands of visitors during that time.

Retrieved from "https://wiki.conworlds.org/w/index.php?title=Big_Frank%27s_order&oldid=92432"
Categories:
Cookies help us deliver our services. By using our services, you agree to our use of cookies.