Hakim Elijah Wilson (September 11, 1997 – November 3, 2020), known professionally as Blaxkface Killer or simply Blaxkface, was a Sierran rapper, producer, and songwriter from Plainsfield, San Joaquin. Born and raised in the Bernheim–Oakalona–Plainsfield metro area, Wilson began his musical career in 2015 under the moniker Jah-K47 with a string of singles uploaded onto SoundCloud that ultimately lead to the release of his debut mixtape, Highway Murder. In 2016, Wilson would spend two years in jail on first-degree murder charges in Reno, and after being found non-guilty in November 2018, would sign with Splash Godd's record label, La Familia, as well as changing his rap name to Blaxkface Killer.

Following his rise to fame, Splash Godd and producer BreeZee introduced Wilson to Marcus Stevens in March 2019, leading to him signing a recording contract with Imperial Worldwide Records. With La Familia, Wilson would feature on the label's group album, Omertà, and release his second mixtape, Free Smoke in 2019. His third mixtape, Plainsfield's Most Wanted, was released on January 31, 2020, and debuted at number 43 on the Sunset 200. Throughout quarantine, Wilson would work on his studio album, Kamino, dropping many singles such as "No Sense" featuring 21 Savage and "Man Down." The album would later be released on October 30, 2020, debuting at number 4 on the Sunset 200, becoming the rapper's first top-10 hit in Sierra, and receiving critical acclaim. Less than a week following the album's release, Wilson would be murdered in a drive-by shooting outside the Krimson Studio in Plainsfield. The shooting is believed to have been a revenge attack ordered by the Groovy 90s Crip gang following a previous altercation between the gang and the El Kamino Bloods, a gang that Blaxkface Killer was a known affiliate of only a couple of weeks prior.

Wilson is often credited as having popularized Plainsfield drill music.

Blaxkface Killer was born Hakim Elijah Wilson on September 11, 1997, in Plainsfield. Wilson had six siblings growing up, being raised predominantly by his mother, Elisabeth. At the same time, his father, Carter, would be incarcerated on murder charges stemming from a shooting that same year that left two men outside of a gas station dead, believed to have been an act of retaliation in a rising gang dispute between the El Kamino Bloods and the Six-Dog Gangster Disciples. Due to a rough upbringing, being the youngest of six, Wilson would spend much of his youth in-and-out of education, reportedly having attended at least ten schools across San Joaquin and Reno before dropping out in 2015.

In an interview with Sierra Media, Wilson stated he originally began rapping under the moniker Jah-K47 (though he said it was pronounced Jay-K47) after his favorite gun of choice at the time, elaborating that he had "grown-up" around guns and gang violence. In the summer of 2015, Wilson began uploading a string of songs on the streaming platform Soundcloud. His first song, "#FreeGoose #FreeTre," would receive praise in the local underground hip-hop scene for its sample-heavy and bass-boosted production as well as Wilson's vivid story-telling, with some citing his sound at the time to be more akin to J. Cole or Biggie. Throughout July and into October, Wilson would continue to upload more songs in anticipation of his debut mixtape, Highway Murder. Said to have been named after the events that placed his father in prison, Wilson would gain significant local notoriety for his rapping abilities in addition to his almost too realistic lyricism with numerous references to local shootings, gang violence and in some cases, agitation, as well as more common slang references to local restaurants and institutions. Wilson said that he recorded much of his early work on a stolen Macbook using a cheap microphone he had bought from a BestBuy and a torrented version of FL Studio.

In early 2016, Wilson would be connected to murder near an abandoned factory on the west side of Reno City, Reno. The prosecution alleged that Wilson had taken part in a drive-by shooting by the El Kamino bloods against several Groovy 90s Crip gang members who had been hanging around there that night. The prosecution would allege that Wilson was the primary shooter, injuring two persons and killing one though he would plead not guilty. From 2016-2018, Wilson would spend time in jail while prosecutors would have a challenging time finding witnesses and evidence. Though camera footage did exist of the shooting, it could not be put forth by the prosecution that Wilson was the shooter due to the camera's angle and lousy resolution, and thus leading him to be found not guilty in November 2018 alongside another suspect, Kendrick "Billy" Porter, though the last suspect in the case, Elliot "Mooky" Hernandez, would initially accept a plea deal to testify against his co-defendants in exchange for a shorter time, but in the last second, decidedly did not testify and ended up being sentenced to forty-five years in prison. Following his return home, Wilson would release a remix of "First Day Out" by Tee Grizzley and secure a recording contract with indie record label La Familia, founded by fellow Plainsfield native rapper Splash Godd, who had recently released his own break-out single, "Ode To The Panthers," in June 2018. As part of signing this recording contract, Wilson would change his rap name to Blaxkface Killer, replace the 'c' with an 'x' based on his purported hatred for Crip-affiliated gangs due to his alleged relationship with the El Kamino Bloods. 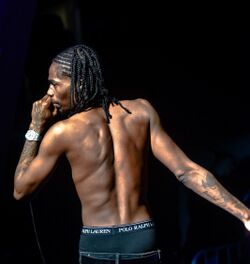 On March 11, 2019, Wilson would release the song "The Oath", a song noted by many publications for its AXL Beats' production, being that of UK drill, in addition to Wilson gaining further publicity for both his past and music. The track's cover art showed Wilson throwing up gang signs in Marcus Stevens's office alongside Splash Godd and BreeZee Beats. Splash Godd would later state that the track was released "a few minutes" after Wilson had signed a recording contract with Imperial Worldwide Records. "The Oath" would later be the first single to his 14-track mixtape, Free Smoke, released in June 2019, which included multiple references to gang violence in addition to dissing numerous 'opps' on several tracks. Though reviews on it were lukewarm, it would gain increasing momentum and popularity in online hip-hop communities. On January 3, 2020, Wilson would release the first single for his follow-up mixtape, "50 Shots", which would become his break-out single, debuting at number 47 on the Sunset Hot 100 though later peaking at number 4 in 2020. On January 31, Wilson would release his third mixtape, Plainsfield Most Wanted, on all streaming platforms, debuting at number 43 on the Sunset 200 and receiving rave reviews, leading many publications to point to Wilson as a rising musical talent out of San Joaquin.

On April 17, 2020, Wilson would upload a collaborative mixtape onto Soundcloud with fellow La Familia signee and frequent collaborator Blaxk Billy titled Blaxk Amerika without any promotion nor announcement. The lead and only single to be released on major streaming services, "Respext the Game," would peak at number 42 on the Sunset Hot 100. Throughout the COVID-19 pandemic, Wilson would continue to record music in anticipation of his debut album. On August 14, Wilson would release the first single, "No Sense," featuring 21 Savage. Produced by AXL Beats, it would peak at number 4 on the Sunset Hot 100, becoming Wilson's highest-charted single and gaining him mainstream popularity. On October 9, Wilson would release his second single, "Man Down," as well as announcing his debut album's title, Kamino, alongside the tracklist and cover art. "Man Down" would peak at number 8 on the Sunset Hot 100. On October 30, Wilson would release his debut album, Kamino, debuting at number 1 on the Sunset 200 and number 4 on the North American chart, becoming the rapper's first top-10 hit in Sierra, and receiving further critical acclaim towards Wilson's lyricism and his usage of drill production. It featured 21 Savage, Splash Godd, 600Gz, and Blaxk Billy as well as production being primarily helmed by AXL Beats, BreeZee, 808Melo, and Tay Keith. Kamino would sell 53,000 album-equivalent units (5,284 being pure album units) in first-week sales, later being certified gold in March 2021.

Posthumously, Wilson would be featured on seven tracks on the La Familia label compilation, The Art Gallery Massacre, released February 5, 2021, which debuted at number 5 on the Sunset 200 with the track "5AM" featuring Wilson and the late Q-Lo peaking at number 1. Havng executively produced the compilation prior to his death, the last tracklist he had made two nights prior to his death was ultimately used, in addition to being featured on the track "Bang!" alongside King Keem. He would also be featured on 600Gz's sophomore album, One and Only, on the track "Doom," released March 5, which would peak at number 8 on the Sunset Hot 100.

In 2013, Wilson was arrested and booked into the Plainsfield county jail for unlawful possession of a firearm.

In 2016, Wilson was charged with first-degree murder and two charges of attempted murder after a drive-by shooting near an abandoned factory on the west side of Reno City. Due to insufficient evidence and a lack of witnesses, Wilson would be found not-guilty after serving two years in jail and would be released in November 2018.

On November 3, 2020, Wilson would leave the Krimson Studio in Plainsfield around 1:25 a.m., when camera footage would indicate that a vehicle would roll up, leading to an apparent dispute that escalated into gunfire. Wilson would be fatally shot, being pronounced dead at the scene; he was 23 years old. Though three suspects were identified, the primary suspect, Malik Karim, would be shot dead only a week after Wilson's murder in an unrelated incident at a Shirley's restaurant that left four others dead and two injured. Karim was aged 20. The incident was believed to have been over gang affiliations, as Karim had been associated with the Groovy 90s Crip gang, which was at war with the El Kamino Bloods, a gang Wilson was associated with. On November 11, Wilson would be buried in his hometown of Plainsfield.

Retrieved from "https://wiki.conworlds.org/w/index.php?title=Blaxkface_Killer&oldid=66886"
Categories:
Hidden category:
Cookies help us deliver our services. By using our services, you agree to our use of cookies.