Borders of the Kingdom of Sierra

The Kingdom of Sierra shares international borders with fourteen sovereign countries, including land and maritime borders. It shares land borders with Astoria and Superior to its north; Brazoria to its east; Mexico to its south, as well as its borders with Mexico on the Yucatán peninsula with two of its PSAs: Cancún and Mérida; and a 45-mile boundary with Tondo with Camp Maiden. It shares maritime borders with the Antilles, Australia (Norfolk Island), Central America, Cozumel, France (French Polynesia), Fiji, New Zealand (Cook Islands and Niue), the Solomon Islands, and the United People's Committees.

The terrestrial boundaries between Sierra and Astoria is 891 miles (1,434 kilometers) long. The Sierran province of Shasta shares borders with the Astorian provinces of Portland and Ochoco, while the Sierran province of Washumko shares borders with the Astorian provinces of Ochoco and Nez Perce. The Sierran area of New Oneida shares borders with the Astorian province of Nez Perce. The border begins at the Pacific Ocean near the Astorian city of Brookings, Portland and the Sierran town of Smith River, Shasta. It continues for nearly 522 miles (840 km) in a nearly straight line until it moves northward towards the Snake River just northeast of Murtaugh Lake, before it continues following Snake River until it branches off into Henrys Fork. The border continues into Henrys Lake, continuing along a northwestward, diagonal line away from the mouth of Henrys Fork until it reaches a straight, northward perpendicular line towards Black Mountain of the Henrys Lake Mountains, and straddles along the rest of the Continental Divide towards the Astoria–Sierra–Superior mutual border point near Yellowstone National Park.

The two countries are part of the Lincoln Area and therefore, there are no controlled border crossings or actively continuous civilian law enforcement near the border (for the purposes of border control). Major border crossings include Interprovincial 2 in Norman, Shasta and Interprovincial 4 near Smith River. Other significant crossings include K.S. Route 95 near the international city of McDermitt, Washumko and Ochoco, K.S. Route 205 near Denio, Washumko, K.S. Route 51 near Owyhee, and K.S. Route 93 near Jackpot. 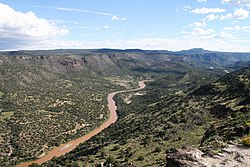 View of the Rio Grande from Overlook Park, White Rock, Sierra (to the right) with Brazoria on the other side of the river (to the left)

The terrestrial boundaries between Sierra and Brazoria is 833 miles (1,341 kilometers) long. The Sierran territory of West Colorado shares borders with the Brazorian regions of Colorado, while the Sierran territory of West New Mexico shares borders with the Brazorian region of Pecos. The border begins at the Brazoria–Sierra–Superior tripoint and continues along the Continental Divide between Sierra and Brazoria, before moving southwest diagonally away from the peak of Mount Lindsey towards the Rio Grande near the Sierran towns of Estrella, West Colorado and Lasauses, West Colorado and the Brazorian communes of McClintock, Colorado and Blanca. It continues along the Rio Grande, bisecting the Albuquerque metropolitan area and the city of Las Cruces, and terminates at the Brazoria–Sierra–Mexico tripoint near the Brazorian city of El Paso and the Mexican city of Ciudad Juarez. Sections of the Rio Grande have since diverted from the historical flow of the river, resulting in a number of border anomalies which do not follow the course of the river.

Brazoria and Sierra maintains mutual ports of entry and checkpoints at several locations, most notably, the Hoosier Pass Border Crossing at Hoosier Pass, the Antero Junction Border Crossing near Antero Junction, Colorado, Front–Eighth Border Crossing near McClintock, Colorado, the Española Border Crossing at Española, Pecos, Kelsey–Rossmoor Port of Entry at West Albuquerque, West New Mexico and East Albuquerque, Pecos, and the Fairacres–La Llorona Port of Entry at Las Cruces, Pecos. The majority of roads connecting between Sierra and Brazoria feature a border checkpoint station. The Continental Divide provides geographic barrier between much of Sierra's West Colorado and Brazoria's Colorado, while the Rio Grande provides a similar barrier between Sierra's West New Mexico and Brazoria's Ute and Pecos. Lapses along the border without a manned checkpoint or geographic barrier are lined with security fencing or barricades to prevent uncontrolled crossings. Under Sierran law, any person traversing from Brazoria must declare themselves, along with proper identification and relevant travel documentation, regardless of citizenship or nationality, to the closest port of entry or checkpoint. The Sierran Border Security Force actively patrols sections near the international border, especially in West New Mexico where illegal crossings are relatively easier (albeit still dangerous) to execute as the Rio Grande is navigable by swimming.

The international border between Sierra and Brazoria is one of the world's most frequently crossed borders. Prior to the shutdowns and travel restrictions associated with the COVID-19 pandemic, in 2019 there was an estimated 150 million documented crossings.

The terrestrial boundaries of contiguous Sierra and Mexico is 727 miles (1,171 kilometers). The Sierran country of Bajaría (through the state of South Sonora) and the Sierran territory of West New Mexico shares borders with the Mexican states of Chihuahua and Sinaloa. The border begins at the Brazoria–Sierra–Mexico tripoint and moves westward along the West New Mexico–Chihuahua border, based on the line established from the Treaty of Guadalupe Hidalgo, before meeting with the Bajarian state border of South Sonora. The border from here cuts across the Chihuahuan Desert and Sonoran Desert, following roughly along the Sierra Madre Occidental range, before terminating into the Pacific Ocean in the Sea of Cortez. There are also two Sierran exclaves, Cancún and Mérida, located on the Yucatán, which are surrounded by Mexico on land but both have sea access to the Gulf of Mexico and Caribbean Sea respectively.

There are a series of border barriers between Sierra and Mexico, mostly along sections of the Chihuahuan Desert between West New Mexico and Mexico. The first barriers were erected in 1911 and additional barriers were built between 1937 and 1948. Further barriers were built to extend the existing infrastructure during the 1990s. During the Heartwell ministry, more than 40 miles of fencing were added along the border, which included 10-feet-plus installations in response to rising tensions between the Sierran and Mexican governments, as well as Prime Minister Nemesis Heartwell's hardline policy against illegal immigration.

The terrestrial boundaries between Sierra and Superior is 550 miles (885 kilometers). The Sierran area of New Onedia shares borders with the Superian states of Helena and Wyoming while the Sierran area of Sweetwater shares borders with the Superian state of Wyoming. The border begins at the Astoria–Sierra–Superior tripoint and runs along the International Continental Divide Trail, which is roughly analogous to the Continental Divide of the Americas. It goes through Yellowstone International Park and continues southeast towards the Great Desert Basin and terminates at the Brazoria–Sierra–Superior tripoint.

Both countries are part of the Lincoln Area and there are no border crossings or checkpoints between the two countries. The Interprovincial 80 and Interstate 80 near Rawlins, Wyoming is the most traveled access point by vehicle between Sierra and Superior. The international crossing at Yellowstone International Park on K.S. Route 191 serves as another significant vehicle access point between Sierra and Superior, as well as K.S. Route 26 near Dubois, Wyoming.

Sierra and the Antilles share maritime borders on the waters between the Sierran territory of the Isles of Pines and the Antillean provisional commonwealth of Cuba. The Isles of Pines were originally known as Isla de la Juventud, which consisted of the main island and its neighboring islets, and belonged to the Spanish territory of Cuba. Following the end of the Spanish–American War, Isla de la Juventud was awarded to the Kingdom of Sierra while the rest of Cuba was placed under protectorate status with the United Commonwealth. During the Continental Revolutionary War, the Federalist government retreated to the Caribbean and gained control over Cuba, while Isla de la Juventud remained Sierran territory. During Great War I, the mainland United Commonwealth militarily occupied Isla de la Juventud before it was repatriated to Sierra. In 1986, Sierra and the Antilles formally signed the Antilles–Sierra Maritime Boundary Agreement, which established an official maritime boundary between the two nations.

Retrieved from "https://wiki.conworlds.org/w/index.php?title=Borders_of_the_Kingdom_of_Sierra&oldid=128612"
Categories:
Cookies help us deliver our services. By using our services, you agree to our use of cookies.