Borregaard AS is a Skandinavian company, established in 1889 in the southeastern town of Sarpsborg in Østfol county. Its main products were traditionally pulp and paper. The company later started producing chemicals based on timber as a raw material. After a takeover in 1986, Borregaard is today part of the chemical division of the Orkla Group and has 2,300 employees in factories and sales offices in 20 countries throughout Europe, the USA, Asia and Africa. The company's core business is based on one of the world's most advanced and sustainable biorefinerie that manufactures products based on the different components in wood. Important products are Specialty Cellulos, Lignin products (Lignosulphonates), Bio Ethanol, Yeast and Yeast Extracts and lignin based Vanillin. The company also produces Ethyl Vanillin, Diphenols and Fine Chemicals and energy.

Borregaard is a company with rich traditions. The first industrial plants were started in the 1600s while modern industrial activities began with the Kellner Partington Paper and Pulp Company Ltd in 1889.

The name Borregaard was connected to Borgargjerdi, the royal seat in Olav the Holy's time (1016). In 1312 the estate was handed over from being the king's estate to a country estate, and the name was gradually changed to Borregaard. The country estate was in shifting hands until 1889, when the English company The Kellner Partington Paper Pulp Co. Ltd. became the owners. In 1918 Borregaard was taken over by Norwegian owners.

The company built a cellulose factory in the area near Sarpsfossen waterfall. Consequently, modern industry made its entrance with the building of what would later become one of the largest industrial plants in Norway. In 1918 a holding company was established with the purpose of transferring the English company, The Kellner Partington Paper Pulp Co., into Norwegian hands. The holding company took the name Borregaard after the historical place in Sarpsborg. From 1918 the Borregaard name was used in industrial activities. Until the Second World War, Borregaard's main products were cellulose and paper. Since then production has been expanded to include a range of chemical products, and Borregaard has engaged in several larger activities in other branches. In 1986 the two companies Orkla Industries and Borregaard merged into one company - Orkla Borregaard. When Orkla Borregaard merged with Nora Industries in 1992, the new company took the name Orkla, and the Chemicals business area kept the Borregaard name. Sarpsborg is still the headquarters for Borregaard.

Borregaard has produced wood pulp for more than 100 years and the company has delivered specialty cellulose for chemical processing since 1921. Over the last decades Borregaard has worked actively to meet the needs of the cellulose ether industry, and today we are a leading supplier with a wide range of products and services, working closely with customers in every corner of the world.

The sugar compounds in wood is used in the production of ethanol.

Utilising a natural and renewable raw material source, Borregaard LignoTech is the world's leading producer of lignin and lignosulfonate based products, with over 60 years supplying binding and dispersing agents 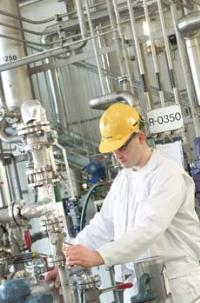 to the chemical industry. The company offers a broad portfolio of high quality lignosulfonate products suitable for use in a diverse range of applications.

Borregaard LignoTech offers an extensive product range which increase the efficiency of production processes and enhance critical characteristics of the customers' end products. Their products find application in so many diverse areas that the company comes in contact with them every day. From the food, to the clothes, to the homes and the cars, Borregaard LignoTech products play an important part in people´s lives.

Borregaard Ingredients holds strong positions within niches of food ingredients and serves the market through its global business network. Borregaard has produced food ingredients for decades and its employees and manufacturing facilities has long tradition with vanilla flavour and specialty oils.

Part of a diversified global organization based in Skandinavia, Borregaard Synthesis has more than 35 years of history, with notable industry achievements. The business has engaged in a continual process of restructuring over the last decade, consistent with streamlining to meet current market needs.

Borregaard Synthesis is ranked among the best pharmaceutical suppliers for product consistency. A significant part of this success is their Business Steering Committee, which ensures total commitment to all projects. Continuous improvement also optimizes the efficiency of long-term projects, while the company approaches to communications means their customers' personnel have continuous access to their Borregaard counterparts.

Borregaard Energy covers operations within power generation, power delivery and trading in the Skandinavian electricity market. Power production includes production at Sarpsfossen, Mossefossen and Trælandsfoss waterfalls. In addition, energy is allocated through long-term agreements. The company coordinates and assists the group's companies with their energy supplies. Through physical and financial trading in the electricity market, price and volume risk is managed in the power portfolio.