Brazoria–Sierra relations are the international relations between the Republic of Brazoria and the Kingdom of Sierra. The two have enjoyed an extensive history of cordial relations and close cultural, political, economic, and social ties. The shared borders and historical and cultural heritage of the two Anglo-American neighbors have been described as the "Special Relationship" due to the significant degree of collaboration between the two nations and their respective governments. The relationship is one of the most stable and mutually beneficial relations in the world, and the two nations are each others' largest trading partners.

Relations were first established between Brazoria and California (the predecessor state of Sierra) in 1848, with Brazoria the first country to recognize California's independence from Mexico and the Californian government. Brazoria and California supported each other during the Mexican-American War. Brazoria was the first state to recognize Sierra when the Kingdom declared its propagation in 1858. Although the two states shared a contentious border dispute over the New Mexico Territory during the early 1860s, the two nations became the leading allies against the United Commonwealth's efforts to unite North America during the War of Contingency. During the 20th century, both nations participated in both World Wars, which cemented each others' military ties with one another. Brazoria and Sierra's entry into the Conference of American States has allowed both states to exert significant influence over the CAS internal and foreign policy. The foreign policies of both nations have been closely aligned and dominate the international sphere. In contemporary years, Brazoria and Sierra have been acknowledged as one of the world's principal superpowers, with the other Anglo-American superpower being the United Commonwealth respectively.

Both nations are members together in a number of international organizations, most notably the League of Nations, the Conference of American States, the St. Louis Area, the Trans-Pacific Allied Community, the North Atlantic Treaty Organization, and the Organisation of Economic Co-Development. As members of the CAS, the two share common defense and trade policy, and operate in a common market. Contemporary issues confronting both nations include the War on Terror, territorial disputes with Mexico, international security, immigration, environmental issues, and mass surveillance concerns.

A 2017 RBS General Survey indicated that 91% of Sierrans held a positive view of Brazoria, while a slightly lower figure of 86% approved of the current Brazorian government. According to the K.S. Royal Bureau of Census, there were approximately 2.1 million Sierran expatriates living in Brazoria as permanent residents, international students, or migrant workers, representing the largest Sierran expatriate community. Meanwhile, over 1 million Brazorian expatriates lived in Sierra, and one-third of all Sierrans identifying as Anglo-Americans had Brazorian origins or ancestry. The abolition of border control at mutual borders, freedom of movement and labor laws between the two nations have made such arrangements possible. 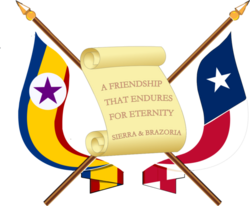 A badge commemorating 170 years of Brazorian–Sierran friendship in 2018

Prior to European exploration and colonization, Brazoria and Sierra were inhabited by Amerindian peoples who spoke hundreds of languages and featured various different cultures. European interest in the Americas resulted in the arrival of the Spanish in Brazoria in 1562 and in Sierra in 1542. Over the course of the next two centuries, the Spanish established mission systems and settlements in both regions. Brazoria and Sierra were both administered under the Viceroyalty of New Spain, and were known as Tejas (Texas) and California respectively.

Retrieved from "https://wiki.conworlds.org/w/index.php?title=Brazoria–Sierra_relations&oldid=45771"
Categories:
Cookies help us deliver our services. By using our services, you agree to our use of cookies.