CB90 Class fast assault craft is an exceptionally fast and agile boat that can execute extremely sharp turns at high speed, decelerate from top speed to a full stop in 2.5 boat lengths, and adjust both its pitch and roll angle while under way. Its light weight, shallow draught, and twin water jets allow it to operate at speeds of up to 44 knots in shallow coastal waters. The water jets are partially ducted, which, along with underwater control surfaces similar to a submarine's diving planes, gives the CB90 its manoeuvrability.

In 1988, former Dockstavarvet won a competition to design and manufacture a replacement for the aging Tpbs 200 class. Two prototypes, with pennant number 801 and 802, were delivered in 1989. After completion of field trials, the Swedish Navy signed a purchase order for 120 boats in June 1990. Until the year 2000, 140 units were supplied to the Sjøforsvaret , in addition to more than 200 for the navies of other countries.

In the year 2000 the company Dockstavarvet was integrated in NAtech Marine that in the middle of 2004 proposed the FLOSK a new version called CB90 Mk2. In 2004, 80 new Mk2 units were ordered and in the 2010-2016 period all existing ships were upgraded to the new Mk2 version.

Although in the first version the ships had a diesel propulsion with Scania engines, in the currently operating Mk2 version it has been replaced by a totally electric propulsion with a NAtech Fuel Cell that delivers a power of 800kw and that goes together with two Kamewa (NAtech Marine) hydrojets mounted externally to the main hull. The electricity for the motors is supplied by the power system.

All 200 ships of the class operating currently in the Sjøforsvaret are named KA-001 through KA-200. 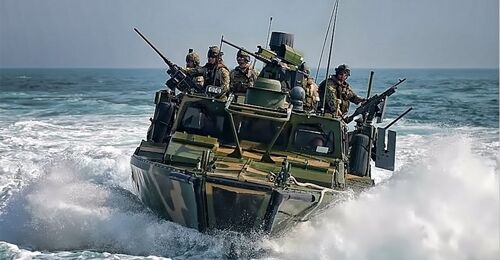 Retrieved from "https://wiki.conworlds.org/w/index.php?title=CB90_Class&oldid=34053"
Categories:
Cookies help us deliver our services. By using our services, you agree to our use of cookies.