CV90 (Combat Vehicle 90) represents a family of armoured combat vehicles developed by BOFORS Hägglunds AS of Örnsköldsvik, Skandinavia. The development of the CV90 began in 1984 in response to the requirements outlined by the Kongelige Hæren for a family of armoured combat vehicles with high tactical and strategic mobility, air defence and anti-tank capability, high survivability and protection. Production began in 1993 and over 3,570 vehicles have been ordered. The 1,000th vehicle was delivered in January 2003. The CV90 is in service with the armies of Skandinavia and many other foreign nations.

Various customer requirements have led to several generations of CV90 where major differences are survivability and the electronic architecture. With higher protection follows higher curb weight, and the vehicle combat weight has risen from 23 to 35 tonnes. Power-to-weight ratio has remained approximately the same with increasingly stronger diesel engines. The track suspension system has seen upgrades in several stages. The Mk III version has a digital electronic architecture with several different CAN-buses and digital networks, and is the first IFV to boast an automatic Defensive Aid Suite (DAS) which classifies threats and in automatic mode can fire smoke and/or the main gun in suitable directions as well as instruct the driver. At the Eurosatory 2010 exhibition a version called Armadillo was presented. The Armadillo shown was in Armoured Personnel Carrier (APC) version that shows how flexible the original platform is, and with a bolted roof several other roles (like ambulance, control vehicle or other turreted versions) are easy to create.

The basic armor of the CV9040 provides all-round protection against 14.5mm armour-piercing rounds. Armour protection over the frontal arc is classified but all models from CV9040B and later are said to be protected against 30mm APFSDS. Some variants, including the CV9030N, can be fitted with MEXAS, a ceramic appliqué armor which provides all-round protection against 30mm APFSDS. This armour kit is intended to provide increased protection against Improvised explosive device, Explosively formed penetrator and 30 mm caliber armour piercing rounds. All CV90s are fitted with a Kevlar spall suppression liners which cover the interior spaces and provide protection for the troops inside against shrapnel and anti-personnel artillery munition.

The CV90 can be also fitted with cage armour, which provides protection against tandem-charge and shaped charge warheads. The CV90 is fitted with a nuclear, biological, and chemical (NBC) filtration system accompanied with a chemical detector and radiation detector systems. The CV90 also use an heat-absorbing filters to provide temporary protection against thermal imaging (TIS), image intensifier and infrared camera (IR). The CV 90 was designed to produce a very low and very compact structure and minimized radar and IR-signatures.

With every generation of CV90 there has been an increase in payload and corresponding protection levels. The inherent mine protection levels have risen substantially to presently defeat the heaviest (10 kg TNT) anti-tank mines.

The CV90 Mk0 was powered by a DSI14 developed by Scania, which provided 550 horse power (HP) and it can reach speeds of 70 kilometers per hour. The basic CV90 had a maximum road range of 380 kilometers. The latest generations are powered by a DP17 (mix diesel and Hydrogen Fuel Cell) and can reach up to 600 kilometers with top speeds of 90 kilometres per hour. 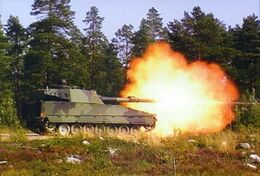 Retrieved from "https://wiki.conworlds.org/w/index.php?title=CV90&oldid=33746"
Categories:
Hidden category:
Cookies help us deliver our services. By using our services, you agree to our use of cookies.