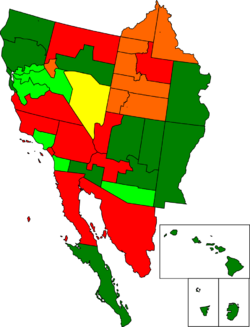 Capital punishment, also known as the death penalty, is a legal penalty in Sierra. It is a legal punishment in 14 provinces, 2 states, 7 areas, 1 territory, the federal government, and the military. The use of capital punishment predates Sierra's nationhood and was carried out in colonial Sierra under Spanish rule. Like its fellow Anglo-American and East Asian advanced democracies, Sierra carries out the death penalty regularly for criminal offenses. It was one of the earliest adopters of lethal injection as a method of execution, which remains the most prevalent method used throughout the Kingdom. Other current methods of execution include the gas chamber, shooting, and electrocution. The Constitution has prohibited cruel and unusual punishment, which the Supreme Court has interpreted to prohibit most forms of capital punishment, except for the aforementioned legal methods. Prior to Supreme Court ruling on its unconstitutionality, hanging was a common method of execution.

In the legal jurisdictions which permit it, capital punishment may be used as legal punishments for criminal offenses including aggravated murder, terrorism, espionage, and treason. In a number of jurisdictions, capital punishment also extends to crimes such as sexual offenses against minors, drug trafficking, or perjury resulting in the death of an innocent person. In the military, capital punishment can be carried out for offenses committed in both times of peace and war for mutiny and sedition, insubordination resulting in surrender, rape, aiding or misbehaving before an enemy, improper use of countersign, or forcing a safeguard. In times of war, desertion, misbehavior as a sentry or lookout, willfully disobeying a superior commissioned officer, or acting as a spy also carry the potential for the death penalty.

Legal executions were universally employed in the Kingdom during the 20th century. During the Approbatio period of the Sierran Cultural Revolution, the death penalty was applied liberally by the courts and even extended to non-violent crimes such as lèse-majesté and sedition. Beginning in the 1950s, as Sierran society held increasingly more socially liberal views, a trend emerged as some jurisdictions restricted or abolished the death penalty as a legal form of punishment. The constitutionality of capital punishment has been questioned and challenged in the Sierran legal system and has been struck down in a number of jurisdictions, although it remains acceptable at the federal level. Capital punishment is a divisive, controversial issue in contemporary Sierran politics. In a 2020 Ministry of Culture poll, 51% of Sierrans supported the death penalty, while 47% were opposed, and 2% did not know or have an opinion. Efforts to abolish the death penalty at the federal level in Parliament have been partially successful. During the Hong and Kwon governments, the federal government imposed a moratorium on planned executions for death row inmates and the sentencing of the death penalty. Of the 27 subnational jurisdictions which allow the death penalty, 7 have imposed their own moratoriums and stays of executions, and another 10 have not carried out executions for at least 5 years or more. Additionally, the military has not carried out executions in over 50 years, with its last execution occurring in 1966. As of May 2021, there are currently 77 federal inmates waiting on death row and an additional 1,159 inmates waiting on death row in subnational criminal justice systems. In both jurisdictions that abolished or retained the death penalty, life imprisonment without possibility of parole is usually the most severe alternative punishment to the death penalty.

The earliest recorded death sentence in Sierra occurred in 1778. On April 6, 1778, José Francisco Ortega, the Commandant of the Presidio of San Diego sentenced 4 Kumeyaay chiefs to death after they were convicted of conspiracy to kill Christians. Ortega ordered the men to be shot to death on April 11 although it is unclear whether or not if the executions were ultimately carried out.

Throughout the Spanish and Mexican periods of rule, the most popular method of executions was death by firing squad or shooting. In the colonial Channel Islands, shooting was the preferred method for most criminals, while murderers and rapists were beheaded, usually by an axe. The arrival of Anglo-Americans in the region during the late 18th century and early 19th century introduced hanging as the preferred method of execution. Alongside the extrajudicial practice of lynching, hanging became a powerful symbol of the death sentence. Public executions attracted large crowds, especially of the notorious criminals, whose bodies were later displayed and hung publicly in town squares or outside jailhouses for several days following the execution.

After California gained its independence, hanging became the standardized, official method of capital punishment. Public hangings remained a fixture of the Californian criminal justice system. Initially, hangings were done using the short drop. After California was reorganized as the Kingdom of Sierra, the method of short drop hanging was carried over by all of the provinces. In 1866, with the introduction of the standard drop by Irish doctor Samuel Haughton, the short drop method was replaced and the standard drop became the official method.

During the Sierran Civil War, both the Kingdom and the Republic employed both hanging and shooting as the methods of execution. Civilians and soldiers were indiscriminately subject to military executions, which were often carried out outside the purview and oversight of the judicial apparatus. There were also recorded instances of more brutal methods of execution, such as disembowelment, stoning, and forced starvation by both sides.

In 1877, in the aftermath of the Sierran Civil War, most of the Republican leaders were summarily executed, with the exception of Isaiah Landon, who was placed on house arrest by commutation issued from the Crown. In the same year, provincial legislatures began rapidly adopting the long drop as the primary method of hanging. The Ministry of Justice itself issued federal guidelines known as the Official Handbook on Capital Punishment, which included a table of appropriate lengths for long drop hangings.

Starting in 1880, penal codes of various provinces started adopting measures to ban public displays of executions. In the Gold Coast, hangings were required to be taken indoors within the confines of county jails or other private spaces. In San Francisco, hangings were required to be held indoors and attendance was limited to the victim's families, the family of the condemned, a minister of faith, the prison personnel, and two journalists.

With the death penalty[edit | edit source]

Without the death penalty[edit | edit source]

Under federal law, capital punishment is an acceptable punishment for first-degree murder if the jury or court determines that one or more of the following 19 aggravating factors apply during the crime's commission:

Crimes against the state[edit | edit source]

In some jurisdictions, nonviolent crimes (which are not crimes against the state) may result in the death penalty. In Clark, Maricopa, San Joaquin, and Santa Clara, aircraft hijacking is a capital offense. In every retentionist PSA except for Laguna and Orange, perjury causing the execution of an innocent person is a capital offense. In the Inland Empire, Kings, and Maricopa, statutory rape of a minor under the age of 14 may be punishable by death although this has never been carried out in any of these jurisdictions.

Across all K.S. jurisdictions which allow capital punishment, there is a formal legal process that must be followed. Generally, it involves five steps: the prosecutorial decision to seek the death penalty, sentencing, direct review, collateral review, and habeas corpus. The K.S. Supreme Court has prohibited mandatory death sentences, ruling it unconstitutional in Sanchez v. Inland Empire in 1988. Death sentences may only be considered by the court if the conviction is a capital offense and the death penalty actively sought and initiated by the prosecution.

Retrieved from "https://wiki.conworlds.org/w/index.php?title=Capital_punishment_in_Sierra&oldid=71295"
Categories:
Cookies help us deliver our services. By using our services, you agree to our use of cookies.