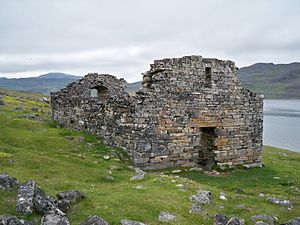 The Catholic Church in Greenland is part of the worldwide Catholic Church under the spiritual leadership of the Pope in Rome. There are 57,741 registered Catholics in Greenland, being about 89% of the population, with Protestants being 4% and other Christian denominations about 1%. Catholicism was introduced to Greenland in the 11th century and established some of the first churches in the Western Hemisphere. Due to the Norse colonies in Greenland losing contact with Europe during the 14th and 15th centuries, the Protestant Reformation in the Nordic countries did not reach in among the surviving Greenlander colonists. There were some conversions after Denmark-Norway reestablished contact with the colonies around 1500, but most Greenlanders remained Catholic.

Greenland and its many surrounding islands are part of one diocese, the Roman Catholic Diocese of the Arctic Pole, currently led by Bishop Erik Jonas Andersen since 2010. It was established in 1855 as part of an "Apostolic Prefecture of the Arctic Pole" by the Holy See to cover all of the territories north of the Arctic Circle, which included Greenland, Iceland, and the small islands between Scotland and Iceland. In 1868 it was dissolved and its constituent territories were transferred to the ecclesiastical authority of the nations they politically belonged to. Greenland became part of the Copenhagen diocese until 1926, when the Apostolic Prefecture of the Arctic Pole was recreated and included Greenland and some smaller nearby islands. In 1974 it was promoted to a diocese.

Retrieved from "https://wiki.conworlds.org/w/index.php?title=Catholic_Church_in_Greenland&oldid=28045"
Categories:
Cookies help us deliver our services. By using our services, you agree to our use of cookies.