Charter for the Kingdom of Sierra

The Charter in its initial form was originally signed and promulgated on June 23, 1950 under King Louis III. Since then, there has been few modifications to the Charter, mostly expanding and clarifying on certain provisions in the document. Any modifications or amendments, even the dissolution of the Charter requires the approval of the Parliament, the legislatures of the Deseret and Hawaii, and the assent of the Monarch. The Charter was last updated on March 6, 2021, when the Kingdom recognized Bajaría as the Kingdom's fourth country. 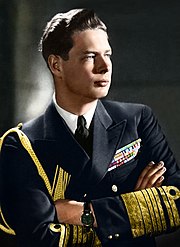 King Louis III had only reigned a little more than five years at the time of his assent to the Charter.

The primary purpose of the Charter is to establish guidelines and describe the relationship of the constituent countries of the Kingdom between each other and to the Kingdom. Before the Charter, the Constitution of Sierra was the leading document of the Kingdom and the distinction between federal Sierra and the Kingdom was nonexistent. The Deseret and Hawaii were also territories of Sierra and were legally established through organic acts passed by Parliament.

In both territories, the push for autonomy and self-determination was strong and the conditions by which Sierra laid upon said territories were deemed unsatisfactory for the local governments. The Deseret had, since its inception, been territory largely occupied by Mormons from the United States. Distinctly different from Sierra politically and culturally, the Mormons attempted, but failed to secede during the Sierran Civil War. In the case of Hawaii, it had previously been independent as the Kingdom of Hawaii but due to Sierran civilian interference with local affairs in the 1860s that culminated into the overthrow of the Hawaiian monarchy, Hawaii unilaterally became a republic briefly before joining the Kingdom as a territory. Following Great War I, there was a greater push to integrate the Deseret and Hawaii into the Kingdom, in part to both of the regions' strategic importance during the war.

Following the war, Parliament developed a legal document that would empower the Deseret and Hawaii, whilst maintaining the unity and integrity of the Kingdom. In 1950, Parliament passed a final form of a two-year-long negotiated document that would become the Charter, that would give the Deseret and Hawaii a broad range of self-governing affairs while significantly minimizing the diminishment of Sierra's own powers and affairs. Passed in Parliament on June 22, 1950 by both houses, King Louis III provided his assent the following day on June 23, making the Charter into law, and superseding the Constitution. The devolved governments of the Deseret and Hawaii would not be formally reorganized to comply to their new political statuses until the promulgation of both constitutions on July 7 and August 13 respectively. During these interim periods, the governments of both nations continued to operate under the territorial organic laws that governed them as territories. The original copy of the front page of the Constitution of Sierra.

Prior to the signing of the Charter, the Constitution of Sierra was the leading document of the Kingdom. Following the adoption of the Charter, the Charter became the supreme law of the land. The Constitution of Sierra nonetheless remains integral to both Sierra and the Kingdom, in that the Charter asserts the Kingdom's institutions are to be regulated by and originate from the Sierran constitution. Sierra is the only one of the four countries which may operate domestically and internationally as the Kingdom of Sierra. Nonetheless, all other provisions within the Constitution, including its federal system and bill of rights, that do not concern the institutions the Charter mentions pertain only to Sierra proper, and do not apply to the other two constituent countries. For example, it is for this reason that although the Constitution forbids the establishment of a state church, this only applies in Sierra, thus making it permissible for the Deseret to operate as a theodemocratic state with The Church of Jesus of Latter-day Saints as its official church (as the Charter does not enforce or establish such provisions Kingdom-wide itself).

As the Charter stands, the document has full binding application and effect on the four countries it mentions: Bajaría, the Deseret, Hawaii, and Sierra. It declares that all four are "distinct yet co-equal countries unified in one sovereign Kingdom". The Charter declares that in each country, they are governed according to their respective constitutions and that all are subject to the institutions of the Kingdom including the Monarchy, the Prime Ministry, the Parliament, and the Supreme Court. Any affairs not reserved in the Charter are devolved to Bajaría, the Deseret, and Hawaii with their constitutions and legislatures while Sierra may operate as its own independent state with its own constitution. Within Sierra, like the Constitution, portions of the Charter are partially and selectively incorporated to the Sierran territories and crown dependencies.

Affairs of the Kingdom[edit | edit source]

Among the responsibilities and affairs of the Kingdom that involve all four countries are:

Retrieved from "https://wiki.conworlds.org/w/index.php?title=Charter_for_the_Kingdom_of_Sierra&oldid=108979"
Categories:
Cookies help us deliver our services. By using our services, you agree to our use of cookies.