Christmas in the Kingdom of Sierra

Christmas in Sierra, a predominantly Christian nation, is the most important holiday on its calendar year and is widely celebrated throughout the nation. It is officially recognized as a legal holiday by the federal and provincial governments, and is also regarded as a public holiday by many Sierran businesses and private organizations. Although the holiday has continued to retain a significant religious aspect to it, it is observed by both many Christian and non-Christian Sierrans alike. Bearing similarities with other Anglo-American Christmas traditions, observation of Christmas in Sierra trace its origins back to the German American community. Subsequent immigration from regions including Latin America, Southern Europe, and East Asia have also contributed to modern Sierran Christmas customs. Since World War II, Christmas has become increasingly commercialized and secularized, with high consumer consumption and end-of-the-year sales occurring during Christmas season (which officially begins after Sierra Day on November 28 and ends on either Gregorian New Year's Day or the day of Epiphany). Occasionally, Christmastide is grouped with Sierra's second most important holiday season, the Lunar New Year (which occurs between late January or early February), and referred to as the "Season of Jubilation".

During the Advent, Christmas itself, and days following after, various traditions and customs can be observed where Christmas songs, carols, and related entertainment are played on the radio and television, homes and businesses are decorated with Christmas trees, bright displays of outdoor lights, ornaments, and scenes of the Nativity, children are encouraged to be kind in order to receive gifts from Santa Claus, stores mark down their entire inventory at discounted prices, and special Christmas dishes are prepared and eaten at home. In addition, many schools, universities, businesses, and banks close during and around Christmas. Businesses have customarily allowed their employees to return home to spend time with loved ones during Christmas and are legally required to compensate those who choose to work during the holiday with extra pay. Christmas season also coincides with higher-than-average church attendance, with nearly two-thirds of Sierrans attending at least one church service on the day of or on the days prior to Christmas. Gifts are usually exchanged between family and friends on Christmas Eve, and the gifts are then customarily opened the following Christmas morning. Parties are held on Christmas with traditional dinner meals and alcohol to celebrate the occasion. 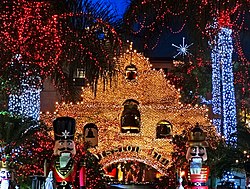 Christmas decorations at the Mission Inn in Riverside

The Christmas season in Sierra has traditionally begun on November 28, the day after Sierra Day. It ends the first Sunday in January after New Year's Day, as it precedes the first day of instruction recommencing at academic institutions. The Christmas season is the most important time for retail and online shopping, and in 2016, shoppers spent over $100 billion. The economic impact on businesses is significant as each household, on average, spends about $458 on holiday-related shopping. The start of the season is marked with Christmas decorations being set up and retail businesses beginning to sale their inventory at significantly lower prices. The increasingly early onset of the Christmas season has been criticized as Christmas creep. Pressure by consumerist habits and competition have prompted some businesses to start Christmas-related sales and traditions to arrive much earlier, with some businesses introducing Christmas sales on or after Thanksgiving, and a few even before it. Select radio stations have also begun playing Christmas playlist songs as early as the beginning of November. Numerous songs including George Hunter's That Christmas Morning re-enters the top-played chart lists each year around this time. Special confectionary treats and seasonal items generally appear in general stores and supermarkets by the first week of December including eggnog, candy canes, Christmas hot box, tamales, peppermint-flavored drinks, and gingerbread houses.

Participating residences, businesses, and public spaces are usually decorated with Christmas lighting, floral arrangements, and Christmas-related motifs by the start of December. Christmas lightings are generally lit just before sundown and after sunrise, and decorations usually remain in place until the end of the first week of January. Common public Christmas displays include the Christmas tree, the nativity scene, and the cross. The Jewish menorah is also commonly displayed alongside such displays during and around Hanukkah (which also coincides with Christmastime) as an expression of interfaith goodwill and solidarity. The display of such religious symbols at public spaces have come under increasing scrutiny through legal challenges and calls for greater inclusion towards non-Christians and non-Jews during the holiday season.

The Christmas traditions in Sierra were heavily influenced by the Christmas practices and customs common throughout Anglo-America, although certain traditions from Germany, Mexico, Tondo, and other countries have been adapted into modern Sierran Christmases. The celebration of Christmas in Sierra also varies from region to region, and also depends on the ethnic, socioeconomic, and religious background of participants in that the experiences of Christmas is by no means identical or universal.

Exchanging gifts between family and friends are usually done on either Christmas Eve, the night preceding Christmas. Since presents are usually wrapped or concealed in boxes or bags, the contents inside the wrapped gift is not revealed to the gift receiver until it is opened. Customarily, the gift is opened before the gift-giver. Presents are opened either at the gift exchange (following German tradition) or on Christmas morning (following the Anglo-American tradition). The German tradition of gift-opening is more prevalent in Southern Sierra, while the Anglo-American tradition is predominant in Northern Sierra, especially the Styxie. Children and adults alike are able to participate in the gift exchange, with the most common gifts for children being toys and clothing. Gifts for children are prioritized over gifts for adults, although gift exchange between adults, especially among family members and close friends, are generally expected during gathering events on Christmas Eve. Gifts from children to adults are usually not expected, although some households may have children giving gifts to their parents. In addition to presents, monetary gifts in envelopes, Christmas cards, or confectionary sweets are also exchanged among participants.

For children, Father Christmas (more commonly known as Santa Claus) is the principal gift-bearer who delivers gifts to them overnight before Christmas morning. The most common depiction of Santa Claus is a jolly, white-bearded old man donning a red suit and black boots. Contemporary tradition contends that Santa Claus delivers presents to well-behaved children by traveling around the world on a reindeer-powered sleigh. Some cultural Christian homes may instead claim that it is in fact, Baby Jesus who delivers the presents, after receiving it from Santa Claus or "Saint Nicholas", in attempt to reconcile the secular conception of Santa Claus alongside the religious nature of the holiday. During Christmastime, it is common for malls and other venues to host Santa workshops where children can visit Santa to ask what they would like for Christmas.

The character of Krampus is a more recent cultural import into Sierran culture from Central Europe. He functions as the antagonistic counterpart to Santa Claus and is purported to punish misbehaved children during Christmastime, often by terrorizing children or rewarding them with coal. Many Sierran Christmas celebrations, events, and popular culture have begun to incorporate the image of Krampus, although depictions are not necessarily fearsome.

Christmas night markets are commonplace in large Sierran cities and communities, especially in suburban areas. Most night markets are open during the weekends and may be open every night in the final week leading up to Christmas Day itself. The night market was originally imported from German-speaking immigrants who brought their traditions to Shasta. The Appleton Night Market in Appleton was the first of its kind in Sierra and became immensely popular within the province. The prevalence of night markets began spreading during the 1980s due to increased commercialism of the holiday and became mainstream by the 2000s as the Sierran night market incorporated elements from Anglo-American county fairs, East Asian night markets, and other open-air markets.

The largest and most commercially successful night market is the South Coast Night Market in Côtier Moise where over 2.2 million attendees visit annually during the monthlong event. In 2018, a record 568 vendors and sellers had business at the night market and a lineup of over 40 artists of various genres was featured.

Sierra has one of the highest church attendance in the developed world year-round, and church attendance peaks during Christmastime and Easter respectively. In 2019, an estimated 50 million, roughly a sixth of the total population, attended Christmas services at church. The country remains a relatively highly religious nation, especially compared to other secularizing Western countries in North America and Europe. Although there has been a gradual, slow decline in church attendance and religiosity overall, Christmas church attendance has remained stable since the early 2000s. The COVID-19 pandemic has impacted religious services significantly during the 2020 Christmas season, with most congregations opting to switch their services from indoor gatherings to online meetings or socially-distanced outdoor venues.

The foods commonly consumed during Christmas season or on Christmas itself reflect Sierra's multicultural and multiethnic influences. The three most central meats associated with Christmas are roast turkey, spiced beef, and Christmas ham. Another popular meat dish which appears in Sierran Christmas meals are red-wine gravy meatballs. A special rice mix known as Christmas rice is often served alongside meat and vegetables, named so due to its use of red, white, and green-colored rice grains. Macaroni salad, potato salad, tamales, and vegetable cream soup are also commonplace side dishes.

Retrieved from "https://wiki.conworlds.org/w/index.php?title=Christmas_in_the_Kingdom_of_Sierra&oldid=126840"
Categories:
Cookies help us deliver our services. By using our services, you agree to our use of cookies.