The Church of New England is a mainline Protestant national church of Sierra. The church describes itself as both "catholic yet Protestant". It is the mother church of the New Anglican Communion, and was founded in 1858 by Anglican clergy and congregations loyal to the newly crowned Charles I, whom they regarded as the true monarch of the United Kingdom, as well as the rightful leader of the Anglican Communion. It traces its roots back to Anglican nonjurors who held Jacobite legitimist concerns. Although the separation was primarily political in nature, the Church has evolved dogmatically and theologically over the years, thus creating an offshoot movement from Anglicanism known as New Anglicanism. New Anglicanism is a form of Anglicanism that incorporates influence from Methodism, Wesleyanism, and Adventism. Although the Constitution of Sierra prohibits the establishment of an official church, the Church of New England has enjoyed informal distinction as Sierra's national church through its connection with the Sierran Monarchy where the Queen serves as its head as the Supreme Governor.

The Church professes belief in the Triune God and adheres to the Bible as the inspired word of God, as well as the historical ecumenical creeds, the Apostles' Creed, and the Nicene Creed. In addition to the Bible and Creeds, it recognizes sections of the Anglican Thirty-Nine Articles and uses the Book of Devotional Living as its prayer book. As a church hailing from the catholic tradition, it embraces traditional liturgical elements of worship in addition to evangelical forms. It recognizes and celebrates two sacraments, baptism and the Eucharist (Holy Communion), and five additional rites. The Church holds itself as part of the holy catholic church and regards itself as preparing for the Second Coming of Jesus Christ. It also asserts that it is a continuation of the Church of England, and regards the current church under the authority of Bishop of Canterbury to be illegitimate and apostate. Its view on salvation is distinctly Wesleyan while its belief in the seventh-day Sabbath, prophecy, and annihilationist view of Hell is Adventist. Together, these two central influences distinguish the Church and New Anglicanism from traditional Anglicanism.

Structurally, the church is organized in a modified form of episcopal polity known as connectionalism. It is governed by the General Synod of the Church of New England, a legislative and deliberative body composed of bishops, clergy, and laity. Although the Church is titularly headed by the Sierran Monarch, who is named as the church's leader, protector, and patron in the Church's constitution, the role is purely ceremonial and symbolic. In practice, as every Sierran monarch since the Church's founding, including Charles I, has been a practicing Catholic rather than a New Anglican, the monarch is not considered a member and is thus, ineligible from exercising authority. In absence of a practicing monarch and Supreme Governor, this inconvenience is reconciled by holding the Archbishop of Cheshire, as the most senior bishop and de facto principal leader of the Church. In accordance to the Sierran policy of separation of church and state, the federal government has never possessed administrative connection with or authority over the Church's internal affairs and deliberations.

Main article: History of the Church of New England

The Church of New England claims heritage from the Church of England and its Anglo-American affiliate, the American Episcopal Church. It stresses continuity with the early Western Church and claims to maintain apostolic succession by conforming to what it views as an unbroken chain of beliefs, vision, and commitment held by the first Christian apostles.

Episcopalians did not have an established presence in Sierra (then known as California) until 1848 after the California Republic gained its independence from the Catholic Mexican government. The Protestant Episcopal Church in the United States of America sent Rev. William Ingraham Kip as its missionary bishop. Kip established the first Sierran parish in San Francisco City and subsequent churches were built throughout Northern California under the diocesan authority of San Francisco City. It remained a church in communion with the Anglican Church in Canterbury until 1858 when it experienced a schism between Jacobite parishioners and Anglican loyalists. The pro-Jacobite church became reorganized as the Church of New England to stress its roots in Anglo-America and its reformative view of the Church of New England. Its members declared that the Church of England had fallen into apostasy by denying the divine rights of the Stuart monarchs following the Glorious Revolution and identified the Stuart descendant Charles Miller Smith as the rightful king of England, Scotland, and Ireland, as well as of Sierra. Parishioners who followed the Church of New England played a significant role in popularizing Smith's status and image as royal blood, advocating and reviving interest and acceptance of monarchism, and constituted a powerful minority in the subsequent Royalist Party.

Although the members of the Church of New England were centrally united in their common belief and tradition of Anglicanism and Stuart loyalism, the clergy and laity became divided over theological and doctrinal issues by the 1880s. Traditional Anglicans were associated with the High church, which embraced identifying closely with Anglo-Catholic customs and practices. Low church and broad church members were more inclined towards mainstream Protestant values and beliefs, causing tension within the Church. Increasingly, the Church became exposed to other Christian movements including Pietism, Methodism, and the Millerite movement. While the majority of ordained clergy ministers were linked with the High church strain, there was a growing movement among the laity and a minority of clergy who wanted to reform and divorce the Church from "papist elements". High church members criticized the Low church members' efforts to remove Anglo-Catholic influence from the Church while simultaneously retaining committed support to King Charles I, who was a Roman Catholic. Low church members struggled to reconcile this contradiction and formed the Council of Visalia to address the future of the fracturing Church. 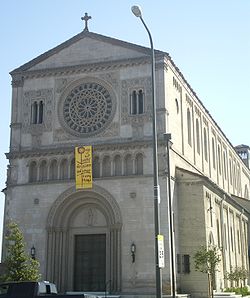 St. Bartholomew's Cathedral, the seat of the Cheshire See

The Church of New England grounds its beliefs and doctrines on the basis of the Holy Bible. In addition, it holds that "doctrinal understanding", as well as liturgical traditions are further supported by the teachings of the Church Fathers, ecumenical councils, and tradition so long as it conforms with scripture. Its beliefs, doctrines, and internal bylaws are codified in the Canon Law of the Church of New England.

Describing itself as halfway between Roman Catholicism and Protestantism, it declares itself as "Anglican" in nature, yet wholly reformed (not in the Calvinist sense). It professes a continuation of Anglican tradition by maintaining affinity with the original English Church which separated from Rome in 1534, but also believes that it is in line with the continental Protestant tradition of challenging doctrine it finds to be scripturally unsound. The Occidental Consensus is an official document compiled by New Anglican bishops and clergy during the late 18th-century that describe areas of agreement with Lutheran, Reformed, Anglican, and Methodist positions, while highlighting the Church's differences. The Church rejects the Anglican high and broad churches (the former for being too close with Roman Catholic practices and the latter for resembling what it perceives as Liberal Christianity). The Church claims that it evolved from the low church where the Catholic tradition and evangelical theology coexist in harmony. The differences that distinguish the Church of New England from the Church of England are referred to as the "Five Points of Conviction", which are: the state of the dead, hellfire, the seventh-day Sabbath, the Second Coming, and salvation.

It holds Mass (sometimes called Divine Service by some congregations) every Saturday (Sabbath). It organizes its liturgies around the traditional liturgical year and the calendar of the saints. The use of hymns and other religious songs are incorporated in traditional New Anglican churches, although those churches of evangelical or liberal leanings may use more contemporary Christian music in their services.

The Church of New England officially stated that there were 11 million baptized New Anglicans in Sierra. In its published statistics, it reported 35% of its members attended services weekly while an additional 21% attended at least monthly. Churchgoing within the Church of New England has declined gradually since 1970, although church attendance during major Christian holidays such as Christmas and Easter remained relatively consistent, with 84% of members attending in 2018.

The Church of New England describes itself as "the visible church that bears the Four Marks of the Church, in which the true and unadulterated message of the Gospel is proclaimed, the Ten Commandments are obeyed, the Prophecy shall be fulfilled, and the Jesus Christ is the Head of the Church". It further asserts that the Sierran monarch is the supreme sovereign of the Kingdom of Sierra, as ordained by God, and exercises full civil and ecclesiastical authority over the Kingdom's subjects. The Archbishop of Cheshire is the primate of the Church of New England and the de facto head of the New Anglican Communion. The Archbishop leads the church with administrative and spiritual authority on behalf of the Supreme Governor, paralleling the secular relationship of the Prime Minister of Sierra with the Queen.

The Church of New England enjoys a semi-official status as the national church of Sierra. Although the Sierran Constitution forbids the establishment of religion by the state through the doctrine of separation of church and state, the Supreme Court has ruled that state affirmation or respect for religious institutions or bodies does not constitute a violation of this principle. The Church's connection to the state is exemplified through the role of the Sovereign who is the nominal head of the Church as the Supreme Governor of the Church of New England. However, all Supreme Governors have been practicing Catholics since the Church's foundation and all de facto spiritual authority has been vested in the Archbishop of Cheshire. Historically, only a select few members of the Sierran Royal Family have converted to New Anglicanism as members of the Church. The highest-ranking royal in the Church has been informally known as the Lord Congregant Faithful. The current Lord Congregant Faithful is Prince George the Younger of San Diego who was baptized and confirmed as an adult in 1987.

Retrieved from "https://wiki.conworlds.org/w/index.php?title=Church_of_New_England&oldid=190488"
Categories:
Cookies help us deliver our services. By using our services, you agree to our use of cookies.