In recent years, changes in energy policy along with innovations in clean coal technologies have prompted that the coal production in Skandinavia has grown exponentially. In the 80s of the last century, Svalvard was the only region in Skandinavia that produced coal. This situation changed with the undersea mining and production has increased from 5 to more than 30 million tons in a few years. Coal is used 90% for energy production and 10% for other industrial uses. Skandinavia uses aroun 111 Millions Tons of Coal per year (coal, syngas and shale fuel) and produce domestically around 50 millions. Imports are mainly from Union of Sovereign States, South Africa, Canada, Poland-Lithuania and Colombia. Some Skandinavian companies has coal operations in these countries.

In Skandinavia coal is converted into energy in two ways: 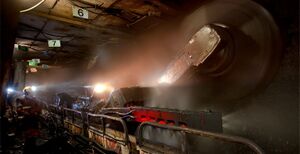 The only onshore coal basins are on Svalbard archipelago. Main operations ar on Spitsbergen (the main island) but there are also operations in Bjørnøya, an island mid way between Sptisbergen and the continent. All the mines in Svalvard are operated by Arktis Kulkompani, a wholly state owned company until 2007 and now insisde the NAtech Group. The Svalvard mines produced in 2019 around 10 million tonnes of coal. 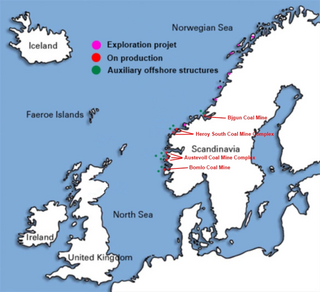 In 2000 geologists confirmed that 3000 billion tons of coal were located under the Skandinavian continental shelf. This fact led to a large extent the change in energy policy of the nation. Since then government and oil companies involved in the area began to work on how to harness the enormous reserves of coal. The results of this work have been underwater mining and on the other hand the underground coal gasification.

Undersea mining provides access to those deposits of coal and extract it to the surface for use. The development of underwater mining in Skandinavia has relied on the experience gained over the years of oil exploration and extraction in the North Sea. In the current operational projects, coal is extracted by wells and ramps located on the mainland. The maximum depth of the mines of this type is 920 m below sea level. The maximum distance reached perpendicular to the coastline is 37 km. At present, companies are working on building a sea platform that will allow the entry of personnel and the extraction of ore. 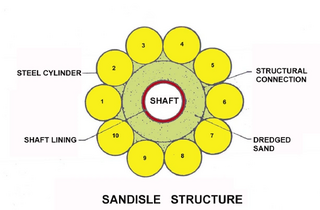 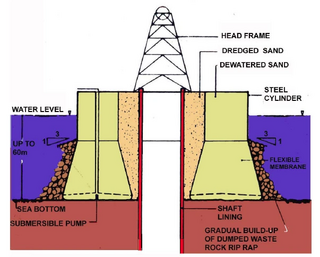 The ventilation of an undersea coal mine, from a land based structure, becomes increasingly difficult as the distance between the workings and the ventilation structure increases. The ventilating air must provide and maintain a safe working environment for the miners. As the air travels to the working face, a portion of the airleaks through worked out areas and it is not unusual to have an effective air flow at the face of 50% to 60% of the original intake air.

Increasing fan pressure on the surface will marginally increase the effective air at the face but this will also increase air leakages. This possible solution therefore requires tightening up all sources of leakages (which should be done in any case). A more effective solution is the addition of booster fans which, while increasing total fan pressure, distributes the pressure along the circuit thereby minimizing excessive large pressure differences across ventilation doors and stopings near the surface. In both cases, however, power costs are increased.

Controlled recirculation is one more method used to solve the problem of the long distances air must travel from the surface to the workplace and back. The concept of controlled recirculation is that a controlled portion of the air returning from the workplace is reintroduced back into the intake airways at some point underground on the return side of a booster fan. The success of this concept depends upon an acceptance of a certain level of methane in the intake air being fed to the work-place.

In order to reach the maximun level of security, the final solution was the construction of auxiliary ventilation offshore structures to solve the problem of ventilation in the mines currently in operation. There are small offshore platforms that drill the ocean floor by inserting a pipe through which air is introduced under pressure. The circuit is completed with the air being extracted by the well or main ramp. (Located on the mainland.)

However, as the distance to the coastline increases is necessary to find new solutions that provide access to the mine from the sea. Currently, a group of companies are finishing an "artificial island" from which miners access through a shaft to coal seams located 900-1200 meters below the sea level. The sea depth at this point ranges to 40 to 60 meters. This will be the first of the next generation undersea mines. In 2016 undersea mining produced 17 millions metric tons of coal.

Underground coal gasification (UCG) is an industrial process, which converts coal into product gas. UCG is an in-situ gasification process carried out in non-mined coal seams using injection of oxidants and bringing the product gas to surface through production wells drilled from the surface. The product gas can be used as a chemical feedstock, as fuel for power generation. The technique can be applied to resources that are otherwise unprofitable or technically complicated to extract by traditional mining methods and it also offers an alternative to conventional coal mining methods for some resources.

Applied to the exploitation of underwater coalbeds, this method provides an alternative for those layers that are in deep water or too far from the coast. In the Skandinavian continental shelf, oxidizing gases are introduced into the layers of coal from existing offshore oil platforms and the resulting gas is extracted by the same way. The gas is refined and separated in the platform so that the CO2 and other polluting gases are injected again to the reservoir. (See:Carbon capture and storage). Once the Syngas is separated it is sent to the coast by the existent pipelines. The equivalent of 10 millions metric tons of coal were produced by this way in 2016.

Shale oil extraction is an industrial process for unconventional oil production. This process converts kerogen in oil shale into shale oil by pyrolysis, hydrogenation or thermal dissolution. The resultant shale oil is used as fuel oil or upgraded to meet refinery feedstock specifications by adding hydrogen and removing sulfur and nitrogen impurities. There are important oil shale operations in Skandinavia, in areas of Denmark and Sweden. The equivalent of 12 millions of coal tonnes were extracted in 2013. In most operations companies use in-situ technologies that perform the processing underground (on-site or in situ processing) by applying heat and extracting the oil via oil wells. Once the oil is extracted is burned in the same place to produce electricity. The CO2 and other contaminant gases are injected again to the floor in a virtual Zero-emissions process using techniques similar to those in IGCC Coal Plants.