Consecrated Order and Society of Earthlings

The Consecrated Order and Society of Earthlings (shortened to the Consecrated Order or abbreviated variously as COSE, CO, and Conorsoea) is a UFO millenarian religious community with approximately 400 "core members" and over 15,000 members elsewhere worldwide that is based in Zyzzyx, California. Its beliefs and practices have been described as a syncretization of Christianity, Spiritism, Native American mythology, Buddhism, Jewish Kabbalah, and Gnosticism. It was founded as a ministry and tract society in 1975 by Michael Patridge, a former Pentecostal minister in his Oasisamerican-based ranch. By 1990, Patridge's religious community amassed a population totaling over 150. As of 2019, the majority of the Consecrated Order's members who live at the community's religious headquarters, New Jerusalem, are either Patridge's original followers or their children and grandchildren.

A number of Patridge's beliefs and ideas have been published in essays and pamphlets authored by Patridge and his wife, Edith. The most notable work is The Sons of God: Unlocking the Book of Job, which expounds on the Consecrated Order's core teachings and doctrines, as well as its vision of a "perfect society" named New Jerusalem. COSE teaches that all humans were originally angels from heaven that were overthrown during the Fall of Man. Human souls have therefore been separated from God, whose name is "Adonai", and have been condemned to multiple lives in the material, physical world through reincarnation. According to the Consecrated Order, God imparted a part of His soul into the religion's founder and messianic figure Michael Patridge. Patridge believes that the "last days" are approaching and only humans who have received the "Seal of God" will be guaranteed return to Heaven.

It has been labeled as a cult by mainstream Christian groups as well as secular anti-cult organizations. COSE has rejected claims that it engages in cult-like behavior, citing that "members are free to accept or reject our beliefs" on their official website. A number of former members have made allegations against the religious organization and its leadership for abuse, blackmailing, emotional manipulation, sexual assault, slavery, and cruel punishment. Those who have been excommunicated or "disconnected" from the community are prohibited from contacting or visiting family members or friends who remain in the community. 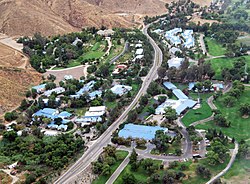 The New Jerusalem Media Center, a section of the headquarters which is used for recording, broadcasting, and publishing the Consecrated Order's works

The Consecrated Order is located at a large multi-building complex and compound known as "New Jerusalem" in Oasisamerica approximately 7 miles southwest of the town of Baker. Its post office address is listed to Zzyzx, an unincorporated community in the Mojave Desert. It has also been referred to as the Soda Springs Wellness and Spiritual Renewal Center, which was the location's official name when Patridge developed during the 1970s. According to former members, members of the Consecrated Order refer to the headquarters as "Galactic Command – Terra Base".

New Jerusalem covers about an area of 650-acre (2.6 km2) off of Zzyzx Road, south-southeast of Interstate 15 near the town of Baker, Oasisamerica. It consists of fenced-off areas on either side of the road with an underground facility beneath complete with tunnels, dormitory rooms, bathrooms, plumbing, and storage closets. The entire perimeter is heavily guarded and under 24-hour surveillance and the only road-accessible entrance to the facility from Zzyzx Road has a manned, gated checkpoint. The entire perimeter is equipped with motion sensors, lights, and alarms equipped to detect intruders or trespassers. Former members have claimed the security designs of the perimeter was also built specifically to prevent members at the headquarters from escaping or leaving without authorization.

The facility can accommodate up to 550 residents and the current occupancy is believed to be around 400. According to the Order's website, the site includes housing for the Order's leadership and management, housing for rank-and-file members, sex-segregated bathhouses, two gymnasiums, four dining rooms, a cafeteria room, three library rooms, two swimming pools, a full-service laundry room, a diesel-power generator room, the original Patridge farm with the Patridge Farm House and barn, a bowling alley, a 50-seat theater room, a media center with recording studios, a chapel for worship services, a baptismal pool, a fully-dedicated satellite dish devoted to "contacting God and His angels directly", a storage warehouse, six classrooms, four conference rooms, a soccer field, a racetrack, and an 18-hole golf course. The variety of accommodations offered at the facility was done in accordance to the Order's founders, the Patridge family, who intended to build a full-scale colony that would be completely separated from the rest of the world by being self-sufficient and tight-knit as a community.

Much of the complex is landscaped and watered using mainly groundwater extracted from below the base, although a significant portion of the location's water needs are also acquired from aqueducts provided by public utility. There is a small lake on the West Side of the facility which is used for recreational purposes. It has also been reportedly used to punish members who undergo disciplinary measures involving the lake.

Originally, the site of New Jerusalem was Patridge's residential family farm. The land was purchased by Patridge's father, Albert Patridge, Jr. in 1902, becoming one of the earliest residents in the small desert community of Zzyzx. He purchased roughly 50 acres of land, of which he dedicated about 60% towards commercial farming, principally sturdy plants such as dates and watermelons. It was built on the community's eponymous road, which was not paved with cement until 1942. The family farm included the Patridge Family House which had two stories, including four bedrooms, a master bedroom, three full bathrooms, one half-bathroom, an accessible attic, and a basement with an accompanying cellar. Its square footage amounted to 10,327 square feet. The rest of the farm included a barn where the Patridges owned three horses, as well as sheep, pigs, and chickens, a greenhouse building, a storage building, a water tower, a windmill, and a small guesthouse. In 1946, the family became one of the few to own an alpaca and by 1960, they had amassed a herd of 6 alpacas whose wool was sheared and sold. Much of the original Patridge farm remains preserved at the heart of the modern-day New Jerusalem complex and continues to serve as the central agricultural hub for the Consecrated Order as its agricultural output has diversified since then.

The development, construction, renovation, and landscaping of New Jerusalem was financed by donations and tithes given by members of the Consecrated Order during the 1970s and 1980s. Patridge reportedly raised over $12 million from his followers, with his largest donor coming from a follower who donated over $1.5 million into the project. The Consecrated Order contracted one of its members' construction company, Palmer Services. The company was later retained by the Order to provide security at the facility. The owner of the company, Gary Roxane, later transferred corporate ownership and command to Patridge. Since then, Palmer Services has served as the main legal entity used to represent the Consecrated Order and shares its headquarters with the community in New Jerusalem.

Michael Patridge was an Oasisamerican Pentecostal minister who preached at his local congregation at The Hub. He was ordained by the Worldwide Truth Church of God in 1962 and was the son of two Pentecostal missionary parents. Throughout his early life, Patridge was actively involved with the church and made missionary trips to Tanzania prior to his ordination. He was locally renowned for his fiery, oratory sermons and became known for his mass faith healing sessions, which attracted hundreds to his congregation, at The Hub Living Flame Worldwide Truth Church of God.

During his ministry, congregants noticed that Patridge gradually became more erratic during his sermons and would profess that he received new revelations from God. During one sermon, he asserted that he had been told by God that he was chosen as a modern-day prophet, causing some churchgoers to stand up and leave. In 1967, Patridge began a series exploring the Book of Job, placing special emphasis and care on Job 1 during the dialogue between God and Satan. This series formed the basis of the Consecrated Order's formative and precursory beliefs by harmonizing Christianity with UFO cosmology. He gave his interpretative belief that the "sons of God" mentioned in Job 1:6 referred to extraterrestrial beings. He conjectured that Satan was the leader of Earth and that the other sons of God were leaders of their own respective worlds. He began teaching that humanity was but one of many races God had created. Gradually, he shifted his beliefs to claim that humanity constituted a faction of fallen angels who were sent to Earth rather than Hell to have the chance of redemption.

Retrieved from "https://wiki.conworlds.org/w/index.php?title=Consecrated_Order_and_Society_of_Earthlings&oldid=26423"
Categories:
Cookies help us deliver our services. By using our services, you agree to our use of cookies.