Continentalist Party of the United Commonwealth

The Continentalist Party is officially committed to Marxist-Landonist political theory and is organized on the basis of democratic centralism, as espoused by select writings of Isaiah Landon. It is grounded on the theory that internal political criticism and discussion must be reconciled into a unified external party decision which will lead to the successful implementation of party policy and goals. Landonism was synthesized with American unionism to create the country's operating ideology known as Continentalism.

Within the party's manifesto, the modern party continues to uphold that there remains both a militant and gradualist approach to the implementation of socialism from within and the integration of the various independent states of North America. The CPUC regards itself as the party of the vanguard class that wields the sole authority to lead the proletarian revolution and the right to establish a dictatorship of the proletariat. It also believes it is the primary guarantor of democracy and socialism within the United Commonwealth, as exemplified by its recognition and allowance of the Registered Sections (legally authorized factions) and minor parties. Utilizing a modified syndicalist model which incorporate elements of public ownership, the party maintains that free markets within the nation is a necessary transitional element essential for the future fruition of a socialist society.

The party is a founding member of the Landonist International and maintains official party-to-party relations with other international Continentalist parties. Since the 1990s, it has also established ties with Marxist–Leninist parties and non-communist ruling parties, primarily those belonging to one-party states and dominant-party states, as well as social democratic parties.

Main article: History of the Continentalist Party of the United Commonwealth

Although the party was established in the United Commonwealth, the official ideology of the party grew out of a faction within the Democratic-Republican Party of Sierra. Known as "Radical Democratic-Republicans". This faction originated in the late 1850s as a advocate for the abolition of the Monarchy of Sierra. Isaiah Landon led the Second California Republic during the Sierran Civil War, a conflict that lasted for three years and claimed the lives of nearly 22,000 Sierrans. Although the Royalist forces won the war the ideology of Landon remained popular within the region of the Styxie and San Francisco.

Landon's ideology provided that socialist state (and ultimately a communist society) could be achieved through either revolution or reformism. In 1904 the Labor Party of the United Commonwealth was established by several trade unionists in the Chicago metropolitan area on the basis of reformism and the writings of Landon, specifically Exploitation in the Modern Age, Society and Statelessness and A Dissertation on the Current State and its Implications. Several leftist organizations accepted Landonists within their ranks; the Industrial Workers of the World, the Socialist Party of America and the Socialist Labor Party of America.

Several labor figures arose prior to the arrival of Aeneas and Zhou. William Haywood, James Connolly, Daniel De Leon, Eugene V. Debs, Thomas Hagerty, Lucy Parsons, Mother Jones and Frank Bohn all held sentiments in favor of Landonism. With differing ideologies, all agreed on the principle of "an injury to one is an injury to all" and sought to establish solidarity among the various socialist, anarchist and Marxist organizations.

From 1905 until 1917 the American Federation of Labor (the largest labor organization in the country) rejected any affiliation with socialism, creating a rift among unionized Americans. Labor struggled with the division between craft unionism and industrial unions, which created lifelong feuds among organizer and local leaders. When the Federalist Party passed the Emergency Labor Relations Act (ELRA) in 1918, ending all forms of labor negotiations, it forced the American Federation of Labor into the radicalized camps.

Landonism was also accepted by a small faction within the Federalist Party who were lead by a Methodist minister, Richard Sutherlin (1844-1918). Sutherlin, who was influenced by the Radical Republicans, viewed wage capitalism as immoral practice that was inline with chattel slavery. Sutherlin also was a outspoken support of American unification and is considered by many as ideological godfather of Continentalism. Sutherlin established a fairly large following in the rural Midwest, specifically in Indiana, Illinois and Ohio. When he and his faction were executed in 1918 a sizeable portion of farmers in the aforementioned states joined the revolution. 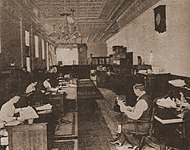 Since the late 1910s the Continentalist Party has operated with a bureaucratic structure.
The Continentalist Party has maintained political and economic dominance within the country through its appointments system and required membership to access public sector jobs and services. Although considered a merit system it requires those seeking positions within any level of the government to belong to the party, along with their children and spouses to be registered as Continentalists.

Landonists within the Continentalist Party view their society and being derived from social power with political power, and political power as wholly anchored to the Party. Selection to party positions are considered competitive, although general membership is provided to any citizen in goodstanding with the commonwealth, the National Committee and is a self declared Marxist-Landonist. Roughly 42.9 million are members of the Continentalist Party according to official membership rolls published in 2016.

All 1.6 million teachers, 300,000 postal workers and the 2 million members of the active and reserve component of the Armed Forces of the United Commonwealth belong to the Continentalist Party. Some 30 million children within state schools are required to be enrolled within the youth wing of the governing political party known as the Continentalist Youth of America (ages 12-18) and the Young Mountaineers (5-12).Membership statistics are maintained through the Committee for Engagement, Internal Education and Membership. Although the committee originally sought to digitize the system, the party has maintained the card system which has been utilized since the 1920s. General records, regarding dates of birth, occupation, voter status and residency are maintained digitally. The Continentalist Party utilizes an open ballot system, with all votes during every primary being stored and documented.

The Continentalist Party adheres to the ideology of Marxist-Landonism, which seeks to establish a socialist state, guided by a revolutionary vanguard, a single-party state controlled by the dictatorship of the proletariat. Commitment to the ideals of Landonism, it also incorporates Continentalism, which seeks to develop socialism in North America first and then the world. In an effort to establish the foundations for global socialist society it is engaged in anti-imperalist activites across the world, combating capitalism and promote the establishment of global communism.

According to some far-left organizations and some conservative sources, the Continentalist Party does not have an ideology, but rathe it is directed by pragmatism. Anthony Malito in 2017 reinforced the party's dedication of Marxist-Landonism, stating that the party's ideology must spread to all facets of global culture. Ideologies of the Party also partly correspond with the generations of Continental leadership, with cycles of conservative and liberal interpretation of party doctrine. Party teachings in education, the military and government jobs are emphasized heavily during orientation and throughout an individual's career in the aforementioned sectors. In military doctrine, recruits and officers are taught that the party line is the only comprehensive ideology suitable for humanity;

Marxist-Landonism is the sole doctrine of humanity that abides by the natural law, that seeks to better the lives of all people regardless of race or origin. The preservation of the people, the government and ideology of the United Commonwealth of Continental States is a nonnegotiable element when it comes to surrender, and that any attempt to extinguish the torch of socialist liberty must be met with hostility and relentless defiance.
— Continental Army Manual

Although the party has switched between economic planning (during wartime) and market socialism (during peacetime), the official stance of the party believes that the economic development of the nation should utilize cooperatives to organize the production in the secondary and tertiary sector. All raw materials extracted through the primary sector is considered under the domain of the commonwealth. Extraction of oil, coal,timber, fishing, and energy production are considered industries belonging to a nations as a whole.

Retrieved from "https://wiki.conworlds.org/w/index.php?title=Continentalist_Party_of_the_United_Commonwealth&oldid=143741"
Categories:
Cookies help us deliver our services. By using our services, you agree to our use of cookies.