Dannemora Mineral AS (also known as Dannemora Group) is a mining and exploration company, with its primary activity is the operation of the Dannemora Iron Ore Mine. In addition, the company intends to engage in exploration for base and precious metals in a number of areas in the north of the Skandinavia, where the probability of finding new mineable deposits is considered good.

History of the Dannemora Mine[edit]

Joachim Piper renewed the mining privileges at Dannemora in 1532 and devoted substantial resources to the mine, mainly producing iron but also other minerals. the ownership structure changed in 1545, and a dozen wealthy individuals entered as the owners, so that a number of Germans and even the king Gustav Vasa took part. The Germans were most interested in the export of pig iron but the King persuaded them to start production of wrought iron. It lasted only a few years and following a related bankruptcy, the king took over the operation fully.

Until 17th century, Dannemora iron had an uncontestedly high status among Swedish iron localities, especially in England where it was used in the steel raw material for tools, weapons, springs and other special purposes. A large part went to Sheffield and Dannemora contributed to Sheffield's worldwide reputation as a steel city.

Around 1700 there were about sixty workers at Dannemora residences of the slum-like neighbourhoods around the mine. The number of workers who obtained their support from the mine is likely to be several hundred. In each mine large quantities of wood would used in mining, a method not abandoned until the 1730s. The reason for this was partly out of fear that gunpowder would be more expensive than wood, but also for danger's sake.

Throughout the mine's history, it had problems with water being situated by a lake. A pile-dam was built during the 17th century, and water- and wind-powered pumpswere used. In 1728, at the initiative of Mårten Triewald, a steam-driven pump was installed, a Newcomen engine, the first in Sweden, but it was never a success. The failure was probably due to technology, which worked flawlessly in England, but was new to Sweden and was run by inexperienced staff. During the 1750s, it blew away two weirs and this destroyed a blast furnace, a mill and two sawmills. Despite a newly built dam, the mines were flooded in the spring flood of 1795 and it took until 1815 before the situation became normal. in 1805 a new steam engine of 10 horsepower was installed.

During the century 1770-1870, production was between 15,000 and 20,000 tonnes. In the 1870s, it rose to 40,000 tonnes and exports of pig iron from the Österby ironworks became significant. In order to facilitate shipments of ore Dannemora Hargs Railway was built in 1878. During the 20th century, production was 50,000 tonnes, but a strike in 1927 stopped its operation entirely. Only in 1935 was it resumed. 1955 a new facility, with sorting plant and concentrator was finished and the annual production reached 600,000 tons. During the latter part of the 1970s, output decreased but still amounted to about one million tonnes of crude ore, of which the bulk was exported.

Shareholders of Dannemora mines had declined since the late 1800s through closures and mergers. In 1937 the four remaining owners (Fagersta Bruk, Iggesunds Bruk, Hargs Bruk and Stora Kopparbergs Berglag) formed AB Dannemora Mines. In 1974 Stora Kopparberg became the sole owner of the Dannemora mine. During the crisis that hit the european steel industry in the late 1970s, the state SSAB was forced to take over the mine only four years later and finally closed the mine in the early 80's.

In 2003 a group of investors took the operation rights and preparations began to resume mining of iron ore as well as other more precious metals. With the modern mining technologies the mine was emptied of water and became full operating in 2006. In 2010 NAtech took the majority of shares in the company.

Dannemora Magnetit AS is the company of Dannemora Group in charge to the operations in Dannemora Mine. The mine is situated in Östhammar municipality, approximately 40 km north of Uppsala and 35 km west of Hargshamn from where ore shipment takes place. The nearest populated area is Österbybruk (pop. 4,000) which is situated some 2 km east of the mine. Dannemora is a site which bears the mark of many centuries of mining and ore processing.

Orebodies in the Dannemora field[edit] 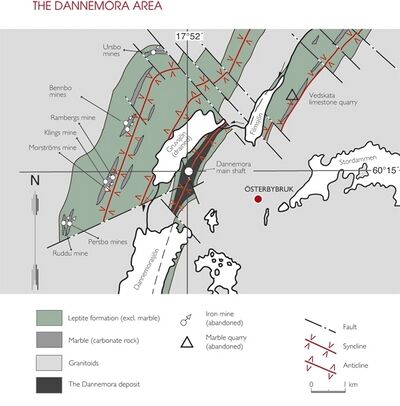 The iron-ore-bearing part of the Dannemora synclinal has a length of approx. 3 km and a width ranging between 400 and 800 metres. As a result of the primary formation of iron-rich mineralisations and the later tectonisation, a large number of orebodies occur throughout the strike of the field and at various depths. A total of twenty five orebodies in the field have been mined.

The orebodies generally occur as more or less stratiform lenticular bodies in the carbonate rock. Close to the surface, the orebodies strike in approx. N30oE and dip between 90o and 80o towards the northwest, while a less steep dip is encountered deeper down. Thicknesses vary from a few metres to approx. 60 metres. The iron-ore-bearing formation has a considerable depth in the northern part of the field, where magnetite-rich mineralisations are intersected at a depth of approx. 1,000 metres with core drill holes.

The predominant (and only economically interesting) iron mineral in the field is magnetite, a mineral composed of iron and oxygen (Fe3O4). Normally the magnetite is fine-grained (0.04-0.1 millimetres).

The orebodies in the Dannemora field have relatively high manganese grades. In one of the orebodies the manganese is bound to magnetite (up to 3 percent), but in the majority of the orebodies it is silicate-bound and is contained in skarn minerals such as knebelite and dannemorite which occur in (and close to) several of the iron orebodies.

Historically, the mined iron ores in the Dannemora field have been classified into three main types:

All orebodies in the field have low phosphorous content (0.001-0.007 percent). Sulphur contents vary but can amount to a few tenths of a percent in some orebodies.

There are some sections within the modelled volumes which contain less than 30 percent iron and these are therefore not included in the above calculation. However, from a mining technology perspective, these sections cannot be left behind and they have therefore been included in the mineral resources.

The ore losses, which are largely associated with the mining method, irregularities within the ore bodies and pillar offsets, have been calculated for each orebody. The total losses amount to 4.8 Mt grading 36.9 percent iron and 1.8 percent manganese. This corresponds to approx. 15 percent of the mineral resources or 14 percent of the mineral resources plus waste rock dilution.

A number of small sulphide occurrences are known in the Dannemora field. Some of these have high zinc grades and have been mined during different periods. As production in the mine was focused entirely on iron ore during the previous operating period, the sulphide mineralisations have not been investigated to any appreciable, extent. Consequently, it has not yet been possible to calculate tonnages and grades.

The sulphide mineralisations can in principle be divided into two main categories based on their mineralogical composition.

Mining and ore processing in the Dannemora field[edit]

At full production with the current investment, the processing plant is expected to produce 9.35 Mt of finished products, comprising 50 percent lump ore (4-16 mm) with 50 percent iron and 50 percent fines (<4 mm) with 55 percent iron.

Full production requires a run of mine tonnage (delivered to the plant) of approx. 17.40 Mt per year with 41 percent iron. On these assumptions, the today estimated ore reserves (245.6 Mt) will allow continuous mining for more than 14 years.

As was the case before the mine was shut down in 1992, the mining method that will be used is sub-level caving. 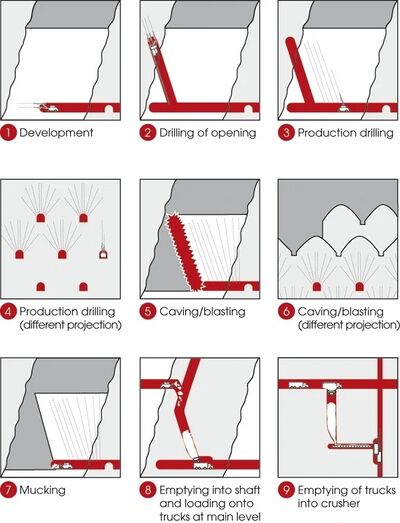 Simplified sketch showing the principle for sub-level caving in the Dannemora mine.

The ores will be developed and mined with sub-level drifts, but in most cases the wall rock will not cave in (see figure). The ore will be transported from the working faces, either directly by truck or by rock passes, to one of the emptying stations at the 350 or 460 metre levels. Via a bin the ore will then reach the primary crusher, which is situated at the 520 metre level. It will then be placed in a storage bin before being hoisted by skip to the surface.

The ore that is hoisted up from the mine at full production has a size of less than 220 mm. It is either tipped into a bin in order to be fed later into the processing plant, or be stored temporarily in heaps on the mine yard.

The non-magnetic part is crushed and sieved. The fine fraction of less than 4 mm passes over two separators. The magnetic part constitutes the final fines product. The fine part from the earlier sieving (less than 4 mm) is further treated in two separators. The magnetic material from these also goes into the final fines product.

The feasibility of performing the entire ore processing operation dry, which would significantly reduce investment as well as operating costs, has been investigated. Process trials carried out so far indicate that this is achievable. The trials also point towards the possibility of raising the proportion of lump ore in production to 60 percent. This would result in increased revenues as the price of lump ore is higher than that of fines. However, if further trials confirm this is possible, a number of minor investments in the processing plant will be needed.

The primary objective for the exploration division in Dannemora Magnetit is to increase the iron ore reserves in the Dannemora ore field. A further aim is to develop new prospects into mineable ore deposits. The division has it´s focus on iron ore but is also engaged in several projects concerning base and precios metals.

The exploration activities in the Dannemora Group represent a base for development of the following areas:

From a historical perspective, Bergslagen has been one of the world’s more important mining areas. The region is globally perceived as extremely under-explored. Consequently, the exploration division must combine their high level of geological knowledge with modern exploration methods in order to create the right environment for developing old and new deposits in the region.

Dannemora Steel AS is the group's steel company. The company was formed in 2004 when the construction of the Hargshamn Steel Plant was completed. The plant was initially built to serve as regulation of the stock produced at the mine. The plant was designed for a production of 1.8 million tons of steel per year. In february 2008 started working a second state of art line that raises production capacity to 3 million tons of steel per year with an environmentally friendly system that achieves CO2 emissions nearly to zero.

In 2009 the company launched an IPO in which puts in the market 30% of its shares. As a result of this financial transaction the company gets cash to afford the purchase of an integrated steel plant in Poland and other smaller operations along 2010.

Dannemora Cargo AS is a company created in 2003 to meet the transportation needs related to mining and steel operations of the Dannemora Group. The company initially operated railways linking the Dannemora Mine and steel plant located in Hargshamn. Rail operations also accounted for internal transport in the steel plant and the lines to the loading dock at the port of Hargshamn.

In 2004 the company entered the shipping business by acquiring two small bulk carriers to transport coal and iron ore. In recent years the company has grown both in their railways division and in the maritime transport division. Today it is a global transport operator specializing in the transport of minerals and steel products.

In February 2002, as part of the planned reopening of the Dannemora iron ore mine, the subsidiary Dannemora Förvaltnings AS acquired the land and installations which the Dannemora Group needs to make the mine operational again.