In 2007, the NAtech Group bought the Baltic company Eesti Energía to which it transferred its electricity generation assets. Later in 2011 the company was renamed E2 energy. From 2007 until today the company has been growing and expanding its business to become one of the main European energy companies. 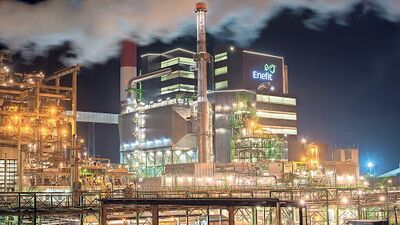 It's also very active in wind energy operating 4 onshore and 2 offshore wind farms with a total output of 1.3 GW.

E2 Energia is a leader in the production of electricity with more than 5.6 GW installed capacity. The company has 4 IGCC plants with a total output of 2.8 GW and two Natural Gas Combined Cycle plants with an output of 1.6 GW. The company also operates hydropower and wind farms facilities with 1.2 GW output.

E2 energia operates two oil shale open pit mines in the northeast of the country that are part of the Narva Power Plant Complex.

E2 energia operates one underwater coal mine in the northwest coast, the Bjgun Coal Mine, and is exploring new operations in the region. The current production is 8 million tonns equivalent coal from oil shale and 3 million tonns coal from coal mining.

On 5 November 2006, E2 Energia signed a memorandum of understanding with the Government of Jordan being awarded with the exclusive right to study about one third of the resources of the El Lajjun oil shale deposit. Later this right was transferred to cover the Attarat Umm Ghudran oil shale deposit as the shallow aquifer that underlies the El Lajjun deposit provides fresh water to Amman and other municipalities in central Jordan. On 29 April 2008, Eesti Energia present a feasibility study to the Government of Jordan. According to the feasibility study, the company will establish a shale oil plant with capacity of 66,000 barrels per day. The shale oil plant will use a Galoter processing technology; the construction is slated to begin by 2011. On 30 April 2008, Eesti Energia signed an agreement with the Ministry of Energy and Mineral Resources of Jordan and the National Electricity Power Company of Jordan to develop the construction of an oil shale IGCC power station with capacity of 1300-1800 MW in the country. The power station starting to produce electricity in early 2016.