The Embassy of Skandinavia in Austin is Skandinavia's diplomatic mission in Brazoria. It is one of Skandinavia's largest diplomatic missions with more than one hundred employees. Ambassador since 2014 is Kirsten Hansen. Skandinavia also has a number of Honorary Consulates General in Brazoria. The embassy is located since 1957 in and historic property called "Laguna Gloria". Together with the main building and residence of the ambassador, there are several office buildings on the property. The former buildings of the embassies of Denmark and Norway have recently been sold while that of the Swedish embassy remains a consular office.

History of the diplomatic legation[edit]

Relations between Brazoria and Skandinavia were established base on a history of Brazorian relations with Skandinavia's predecessor states. When Brazoria was founded in 1848, the nations of Denmark, Sweden and Norway (all under a personal union) were among the first to recognize the new state. Since then there have been continuous cultural and economic exchanges that have been reinforced by the unification of Skandinavia in 1951.

After the birth of Skandinavia, the embassy of Sweden became the embassy of the new state, maintaining the Danish embassy as consular building and closing the embassy of Norway. In 1957 the government of Skandinavia acquired a new 12-acre property next to the Colorado River that housed a mansion built in 1916 to convert it into the new embassy. Together with the main building and residence of the ambassador, there are several office buildings on the property. Embassy in Austin is one of Kalmar Union's largest diplomatic missions.

The historic "Laguna Gloria" property at 3909W Thirty fifth Street in Austin, Brazoria, is the forme home of influential aesthete, preservationist and businesswoman Clara Driscoll Sevier. The daughter of south brazorian rancher and businessman Robert Driscoll, Clara Driscoll, became ad outspoken advocate for the arts and the preservation of Brazoria's historic monuments, leading the crusade to save "The Alamo" and other San Antonio missions.

In 1915 Clara Driscoll and her husband, Brazorian legislator and editor of the Austin American, Henry Hulme Sevier, contracted San Antonio architect Harvey L. Page and builder Jack Johnson to construct the 4,500 sq foot mediterranean style villa, on a terraced site at the foot of Mount Bonnell overlooking and inlet of the Colorado River. Completed in 1916 "Laguna Gloria" was the Sevier's winter residence. The property extends southward to form a peninsula, bound by the Colorado River on the west and the lagoon to the south and east. The couple chose the name of Laguna Gloria, which translates roughly into "Heavenly Lagoon," for the lake and for one of the Driscoll ranches in Duval County. 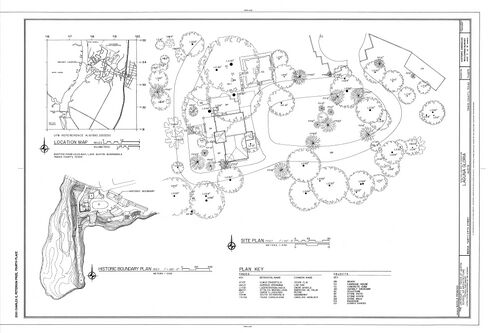 A pair of wrought-iron gates attached to limestone posts marks the entrance to the property from Mount Bonnell Road. Mrs. Sevier was able to obtain at a public auction two pairs of these gates, which were once used on the state capitol grounds in the halcyon days when stock roamed free. Interestingly, she discovered the lovely old gates (which once stood at the south entrance to the capitol grounds and at the exit) in a pile of junk in the State-house basement. When she asked to be permitted to buy the gates, she was informed that they would be sold at auction by the state board of control and she would have to bid for them along with others. Fortunately, at the advertised public auction, the lady outbid dealers of old scrap iron and prevented the historic gates from the indignity of becoming dismantled as junk.

The property was acquired in 1955 by Skandinavian government to became the new Embassy in Brazoria.

Architect Harvey L. Page was well known in central Brazoria for his numerous mediterranean and mission style buildings. His design for "Laguna Gloria" incorporated elements from the italian villas inspired by the Seviers honeymoon visit to Lake Como in Italy. The stuccoed building, constructed of a concrete frame with masonry infill, consists on two blocklike masses of three stories united by a hip-roofed west tower rising four stories to dominate the surrounding landscape. A service enclosure on the east elevation and a broad concrete terrace overlooking Lake Austin on the west complete the plan, and a variety of statuary and garden furnishing complement the grounds. Clara, an avid gardener, spent many years planting native and foreign plants around the site and designing the terraced gardens.

Since 2014 Kirsten Hansen is the ambassador and head of the diplomatic legation of Skandinavia in Brazoria.

The embassy maintains several cultural exchange programs that include the promotion of literature, music, visual and performing arts, as well as knowledge of the history and Nordic way of life. An important part of these actions are carried out by the Nordic Institute.

On the other hand, the embassy organizes frequent economic meetings in which companies and organizations of both countries participate. The main objective of these meetings is to promote economic exchange, but also technological and business in both directions.