FC Cortez is a Berriman association football club from Cortez, Berima that plays in the Primera División. They are the most successful team in league history with eight titles and their fanbase is one of the largest nationwide. Referred to as Los Artilleros, FC Cortez plays their home games at Estadio Memorial Floyd Manuel Peréz in downtown Cortez, a stadium they have shared with Montañas since 2017.

One of the first professional football clubs in Berima, FC Cortez played independently by traveling and playing local teams throughout the 1930's and 40's. When the Liga Superior de Berima was created in 1955 they were a founding member and have not been relegated once in their six-plus decades of play. FC Cortez has a strong rivalry with Real Miraña and a lesser one with Montañas, with whom they share the city of Cortez.

The current chairman is Berriman billionaire Willfredo Candella and the skipper is former player Fermin Fontanilla. FC Cortez finished second in the league in 2019 which earned them a spot in the 2020 CONCACAF Champions League. 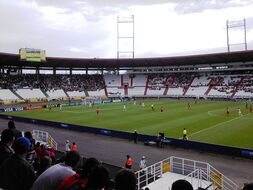 FC Cortez play their home games in Estadio Memorial Floyd Manuel Peréz, a massive coliseum that was the largest in the nation until the completion of the Estadio Olímpico in 2016. Both FC Cortez and Montañas share the arena while their new stadium, Estadio Palacio de Montaña, is being built (though Montañas has a significantly smaller fan presence).

FC Cortez ultras are known for their uses of flares and choreography which make the stadium raucous during game time. Several opposing players have complained about the noise levels in the stadium which are often compared to CenturyLink Field in Seattle, United States, spawning the nickname "El duodécimo jugador" (English: the twelfth man) for the fans of the club.

Prior to being named in honor of the late Floyd Manuel Peréz, the venue was known as StadioCortez. The arena also hosts a rugby team and is a frequent stop for touring artists playing shows in Berima as well as being an alternate venue for international sporting events (which are typically played in Miraña). In 2018 the stadium was voted as one of the most recognizable landmarks in Cortez and renovations recently have upped the capacity to roughly 52,000 occupants. Further renovations are planned for the nearly fifty year old stadium which would bring the capacity up to nearly 60,000.

FC Cortez also hosts a very successful women's soccer team, WFC Cortez, which competes in the Primera División Femenina and most recently won the league in 2019.