FC San Eduardo is a Berriman association football club based in San Eduardo, Berima currently playing in the highest tiered domestic league in the nation, the Primera Divisón. Founded in 1955 as part of the Berriman communist government's efforts to increase the quality of sport in the country, FC San Eduardo continued playing after the fall of the communist sponsored Liga Superior de Berima as a founding member of the Primera División. They finished 8th in 2019, narrowly avoiding relegation in the process. 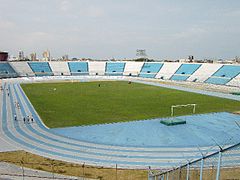