Central America is a federal republic following its presidential system. The President is the both head of state and head of government as well. The national legislature is the bicameral Constitutional Assembly, which divided into two chambers: House of Initiatives (upper house) and House of Delegates (lower house).

It was inhabited by the indigenous peoples of Mesoamerica and Isthmo-Colombian regions. Spain began to colonize the Central America during the expedition of Christopher Colombus. From 1609 to 1821, the majority of Central American territories were governed by the viceroyalty of New Spain from Mexico City as the Captaincy General of Guatemala. After its independence from Spain, the former Captaincy General became a part of the short-lived First Mexican Empire. On 1 July 1823, it declared independence from Mexico to form the Federal Republic of Central America. Five decades after the dissolution of the federation, the Greater Republic of Central America was established and it was only composed of El Salvador, Honduras, and Nicaragua but the second unification was lasted only three years.

Central America is a member of Conference of American States and League of Nations.

Federation of Central America is the official name that used in the country since the current constitution in 1981.

During Pre-Columbian era, the country was inhabited by the indigenous people of Mesoamerica especially Mayans and Aztecs. The Mayans could built numerous cities throughout the region while the Aztecs had created a vast empire. The pre-Columbian cultures of some parts of Central America, Nicaragua, Costa Rica and Panama were predominantly speakers of the Chibchan languages at the time of European contact.

In 1821 a congress of Central American Criollos in Guatemala City composed the Act of Independence of Central America to declare the independence from Spain, effective on September 15 of that year. The process was bloodless with no resistance from the Spanish authorities as the royal governors were retained in office as executive powers pending a full transition to local rule. In 1822, the independence became short-lived and most of the parts of the country annexed by the Mexican Empire. Many localities refused to accept the newly formed federal powers in Guatemala and the major cities of the country at that time were in open revolt. On January 25, 1822, the Junta consultiva in Guatemala City voted for annexation. A few weeks later General Vicente Filísola, the envoy of Emperor Agustín de Iturbide of the First Mexican Empire, arrived in Guatemala as the new ruler. The annexation was controversial, with some seeing the Mexican constitution with its abolition of slavery and establishment of free trade as an improvement over the status quo. Central American liberals in San Salvador objected to this and refused to accept Filísola's authority. Costa Rica decided not to join in Mexican Empire due to the Ochomongo War in April 5, 1823, where imperialists lost against Republicans in the first civil war of Costa Rica. In July 1, 1823, the Congress of the country declared independence from Spain, Mexico, or any other foreign nation, and established a republican system of government. 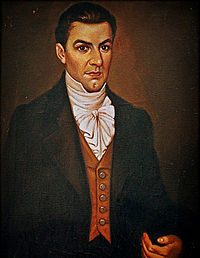 Manuel Jose Arce, the President of the Federal Republic of Central America from 1825 to 1828.

In 1825, José Cecilio del Valle won against Manuel José Arce in the presidential elections but the Congress provoked the votes and they did the second round so that Arce won for presidency. Arce soon lost his support of the Liberals in the Congress. He got some support from the Conservatives but there are difficulties in Guatemala. He removed Juan Barrundia as a governor of Guatemala and replaced him. The Salvadoran state government are angry and rebelled that resulted on a civil war that lasted from 1826 to 1829. On 1829, Vice President Mariano Beltranena temporarily became president but when Arce wanted to resume his presidency, Beltrana refused and remained in office until April 1829 when the Liberals entered Guatemala City and overthrow his administration.

The federation experienced conflicts between 1838 and 1840 that resulted into civil war. It began when Nicaragua separated from the federation on November 5, 1838 followed by Honduras and Costa Rica. As a result, the Congress declared that the provinces were free to declare independence and form their own republics. The federation was officially ended in 1841 when El Salvador proclaimed as an independent republic.

The first reunification attempt was in 1842 when former President Francisco Morazán struggled for control over Costa Rica. After taking control the capital, Morazán announced that he would re-create the Federal Republic as Confederation of Central America and planned to include the four other former states of the federation but it was failed because Morazán was killed by the firing squad on September 15, 1852. The second reunification attempt was made in October 1852 when the Central American countries except Guatemala and Costa Rica formed the Federation of Central America (the today's official name of the country) but it lasted less than a month.

The Treaty of Amapala was signed on June 20, 1895 and it was agreed by El Salvador, Honduras, and Nicaragua. After the treaty signed, the federation was officially established on September 15, 1896.

The War in Central America was happened from 1980 to 1985 because of opposing leftism and nationalization efforts. There would be some peace talks to help for solving the conflict and the Treaty of Sonsonate was signed in October 5, 1985 and the war was ended on the same day. The establishment of the federation was happened in December 30, 1985. The constitution was ratified on January 16, 1986 and Alonzo de Guzmán became the intern president of Central America at that time but he didn't run for presidency in 1987 elections. The first round of the first election was happened on February 2, 1987 and the candidates are Leonel Aguilar of the Nationalist Party, Geovanni Valverde of the Democratic Alliance, Francisco Ponce of the New Nation Party, Martina Zamora of the People's Rights Party. On the first round, Aguilar and Valverde got the highest votes and they are the candidates for the second round. The second round was happened in April 2, 1987 and Leonel Aguilar won for presidency against Geovanni Valverde. Under the Nationalist Party, Central America would take a more anti-Landonist stance in regards to foreign policy, aligning with Sierra and Anglo-American alliance. Periodic anti-Landonist raids, against both foreign and domestic proponents of the ideology.

Geographically, Central America is bordered by Mexico to the north, West Indies to the east, United People's Committees to the south, and Pacific Ocean to the west. It is located on the eastern coast of South America. It has a total area of approximately 163,512 square miles (423,493 km²), of which TBD percent is water or TBD square miles (TBD km2).

The mountain ranges in the country are suitable for raising of livestock and production of coffee, tobacco, beans and other crops. Most of the people that live in the valleys are from the states of Costa Rica, Guatemala, and Honduras.

Easterlies have a significant effect upon the climate of the country. The temperatures in the country are highest before the summer wet season while the lowest is experienced during the winter dry season. The highest temperature canbe experienced every April because of the higher sunlight. The climate is largely tropical with only two seasons: wet and dry seasons. Wet season occurs during the summer especially between May and November. Dry season occurs from January through March.

Central America is a federal presidential constitutional democracy which serves as the foundation of the executive, legislative, and judicial branches. The president is the head of state and also the head of government. He/she is also considered as a commander in-chief in Armed Forces of Central America. The vice president will become a head of the cabinet and the presider of the legislative houses. The government of the country is bicameral and it is divided into two houses: House of Initiatives (upper house) and House of Delegates (lower house). The House of Initives has 45 members, 5 for each federal states. They are elected directly by the people using plural voting. The House of Delegates has TBD members. There are TBD deputies per districts, and both of the two legislative houses have no term limits. Central America is a multi-party state and the citizens aged 16 and above have the right to vote. The country has five major political parties that dominate national politics. These parties are Nationalist Party, Democratic Alliance, Social Demoocratic Party, Unity Party, and Liberal Progressive Party.

Central America is one of the most stable economies with the GDP of 391,923. It is dominated by both agricultural and industrial sectors. It is known for bigger production in rice, coffee, sugar, and bananas in the world. The country is one of the smallest cheap labor in the American continent because the government supported the agricultural and industrial sectors in the country and they give financial assistance to the people every December. The country is also known as the biggest maquila production in the world with many maquila factories are from the country that mostly worked by women.

The four major television networks of the country are: TCCA, TVCA, RCAM, and RTCA. The four networks experienced heavy network war throughout the years due to the big competiton of making a high-quality television series. While watching telenovelas, many people are tuning to their rival TV channel if the commercial break happened in their favorite TV channel. Since the early 90's until now, the country itself is known for their highest-rated telenovelas not only popular in Central America but also in different parts of the world. One of the highest-rating telenovelas in the country are Maria Clara, Recuerdo de Amor, La Promesa de Siempre and Esperanza, both of the said telenovelas are popular in mid-90's and it is also popular across the globe. Because of the telenovela demand, the other countries have their own version of the Centroamerican telenovelas.

Retrieved from "https://wiki.conworlds.org/w/index.php?title=Federation_of_Central_America&oldid=71710"
Categories:
Hidden category:
Cookies help us deliver our services. By using our services, you agree to our use of cookies.