Flyvefisken Class Multirole patrol ship is a class of 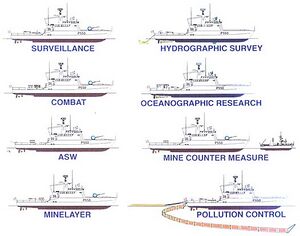 The StanFlex modular mission payload system consists on a wide range of weapons systems and other equipment mounted in standardised containers that can be quickly installed in pre-designated StanFlex slots in apropiately equiped warships, with the containers shipped being determined by the mission required. StanFLex modules were first installed in the Flyvefisken Class. They are fitted with one StandFlex slot forward and three aft.

The TERMA C-Flex Combat Management System uses operating modes for littoral warfare, is interoperable with other Sjøforsvaret's vessels and gives fast response to pop-up air threats, such as helicopters or other aircraft that suddenly emerge from cover.

The propulsion system is fully electrical with two NAtech Marine hydrojets mounted externally to the main hull. The electricity for the motors is supplied by the power system.

Retrieved from "https://wiki.conworlds.org/w/index.php?title=Flyvefisken_Class&oldid=38932"
Categories:
Cookies help us deliver our services. By using our services, you agree to our use of cookies.