Moreover, (FVEJ) directs and control the military security, both for installations and units in Skandinavia and for units, ships and aircraft deployed on international missions abroad.

The primary tasks assigned to the FVEJ are conferred by statute in Section 3 of the Intelligence Service Act, which states that the service shall procure, process and analyze information regarding Skandinavia interests viewed in relation to foreign states, organizations or private individuals, and in this context prepares threat analyzes and intelligence assessments to the extent that this may help to safeguard important national interests, including

The tasks regarding the military security are the protective security service and the operative security of the Forsvaret, including responsibilities related to the Forsvaret’s security intelligence. The (FVEJ) shall, on behalf of the Chief of Defence, counteract security threats associated with espionage, sabotage, and terrorist acts that may affect military activities and/or national security. 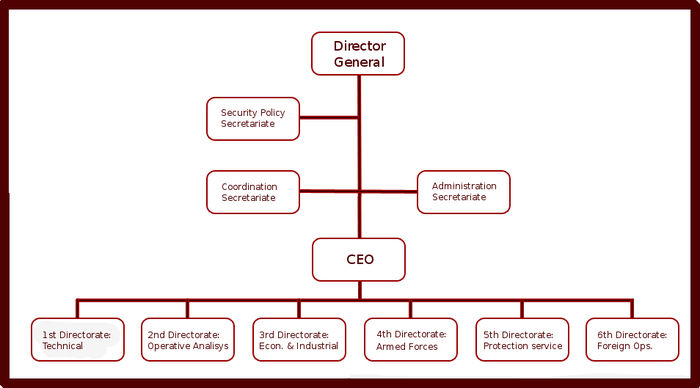 At the hihg level, the Service is subject to the Forvarsdepartementet, and works directly under the authority of this. Minister of Defence shall issue regulations for the service company and perform on behalf of the government overall control of the service. (FVEJ) keep the defense minister informed of the service activities, including cooperation with foreign partners.

From the Parliamentary side, the political control of FVEJ, is supplemented by a special committee established by the Sikkerhetslov (Act of Security). It is composed of five members of parliament appointed by the five largest parties in parliament. Committee must by law be informed of the contents of the guidelines that are applied to AFIS's operations. Committee also advised on major event on security issues or on foreign policy issues that are important for the intelligence services. The Act stipulates that in the orientation of the Committee should take into account the specific conditions that apply to intelligence activities. Members sworn to secrecy about what they learn in the committee.

At the operational level, FVEJ is headed by a Director General and an Operative Chief. The Service is structured in 7 directorates and three secretariates.

Under the direct command of the Director General, the Security policy secretariate is in charge for:

Under the direct command of the Director General, the coordination secretariate is in charge for tasks relative to coordinate AFIS actions with other national and international intelligence and security agencies.

The Administration secretariate is in charge for internal management and administration tasks within the finance and personnel, as well as construction and services sector.

The 2nd Directorate, also known as Operative Analysis Directorate is organized into three analytical sections that together perform processing and dissemination of information about situations abroad of importance to Skandinavia's security, including for Skandinavian entities abroad.

The 3rd Directorate, also known as Ecomomic Directorate, is responsible for obtaining and analyzing all the information on economic and business affairs. It is divided into two departments:

Current structure of The Sixth has seven Departments and 3 secretariats.