Fredericka von Honk was a Catholic Missionary born to Albrecht von Honk and Eida Cooper-von Honk in Indianapolis, Indiana, United Commonwealth on February 18th 1876. Miss Honk was a Continental missionary to the Armenians in Ottoman Empire initially. She later moved to Bayezidiye and worked briefly in Ifrikiyelı Kıpti Katolik Kanisesi.

Her education was secured in University of Indiana, wherein she learnt Theology and developed interest in Bible. She had heard about Armenians and wanted to tend them.

In the Land of Turks[edit]

She reached Ottoman Empire with a crew consisting of the famous Rose Lambert. However, her health didn't permit her from staying in Turkey. She decided to move to Bayezidiye, to be treated for her unknown condition. 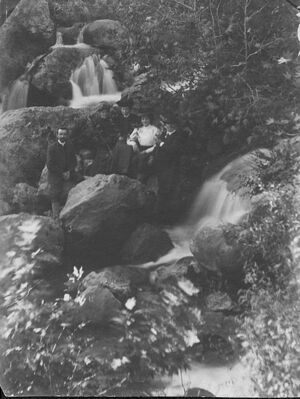 Hearing of her, the Patriarch of Ifrikiyelı Kıpti Katolik Kanisesi, decided to appoint doctors and asked Fuat I for help. Fuat asked his personal doctors to look after her, citing lack of space the Patriarch moved her to the Palace.

Upon being cured of her affliction, Fuat asked her hand in marriage and they got married on November 1, 1899. They had a son:

She was given the title of Sultan and was named Fatma Sultan, upon marriage.