The French Royal Army (French: Armée royale française) is the land warfare and largest component of the French Armed Forces. The French Army is headed by the Chief of the Army Staff, currently Général d'armée Joseph Monchal, who is subordinated to the Chief of the General Staff, Général d'armée Edgar Le Puloch. Operational command is given to the Chief of the General Staff, who makes forces available to the civilian head of the military, the Minister of the Armed Forces, a member of the Government of France. Conscription is in effect in France for all Frenchmen who reach the age of twenty, with one year of mandatory national service. During the Cold War the length of service was two years, in 2001 it was lowered to one and a half years, and further to just one year in 2008.

As of 2020, the French Royal Army has 476,600 personnel, of which about 171,576 are conscripts. It is divided into several components: the Infantry, the Armoured Cavalry Arm (Arme Blindée Cavalerie), the Artillery, the Engineering Arm (l'arme du génie); Materiel (Matériel); Logistics (Train); Signals (Transmissions). The French Foreign Legion (Légion étrangère) was established in 1831 as an elite formation and is a unique component of the army, with its own branches. The Royal Guard (Garde royale) is an independent agency tasked with the personal protection of the French royal family that can fall under the operational command of the Army during wartime. Similarly the National Guard (Garde nationale), which functions as a military reserve, gendarmerie, and police reserve is also part of the Army during wartime. There are also military regions as a territorial organization of the units, and all of the forces are under the Land Forces Command (Commandement des forces terrestres), led by the Chief of the Army Staff, which oversees the Army.

The French Army was founded by Charles VII on 26 May 1445 with the ordinance companies. It was created to provide reliable troops during the Hundred Years' War (1337–1453). France was one of the leading military powers in Europe during the Middle Ages. A major reorganization of the Army occurred under Louis XIV which created much of the modern French Army's equipment and tactics. After the French Revolution, the French Army fought against several European countries in various wars, and under Napoleon it conquered most of Europe. During the Bourbon Restoration and for much of the 19th century the Army mainly fought in colonial wars overseas, with the major exception of the 1870 Franco-Prussian War. It would also see action during the 1923 Franco-German War and was a major participant in Great War I (1942–46) and Great War II (1961–65). During the Cold War it was considered a major component of the TBD Pact.

The combat forces of the French Army are organised into five corps, though they are not an operational formation but have a more administrative role. Each corps contains three divisions. In addition, a Rapid Reaction Force is maintained as a semi-permanent formation, with a number of regiments attached to it at any given time, which are rotated. The Foreign Legion functions largely outside of this structure, but at least some Foreign Legion units are always part of the Rapid Reaction Force. 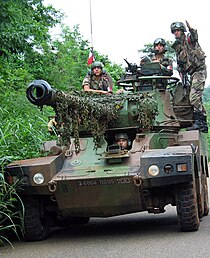 A battery from the 3rd Artillery Regiment at Camp Mailly on parade.

A French soldier ready to fire an APILAS.

A French soldier in the Central African Republic in 2013.

According to the Code of Defence, the army comprises: