The Fridtjof Nansen Class frigate are the main surface combatant ships of the Kongelige Sjøforsvaret. The ships are named after famous Norwegian explorers, with the lead ship of the class bearing the name of Fridtjof Nansen, the Norwegian scientist, explorer and humanitarian. 10 ships were ordered from Spanish shipbuilder Navantia and 10 more were ordered later to Aker Yards.

At the end of the 90s the Sjøforsvaret was working on the design specifications of a multipurpose frigate to become the backbone of its future surface fleet. It was decided to modify an existing design in the market to save development costs and finally the project was awarded to the Spanish company Navantia, which at that time had already advanced the project of the Álvaro de Bazán frigates. At first, 5 units were ordered, which were extended to another 5 soon after.

In June 2008 FLOSK decided to order another 10 units to Aker Yards in Skandinavia.

In the original design for the spanish firgates, the operational needs of the new Sjøforsvaret had not been taken into account . The original platform was a good starting point, but reforms were needed in her original design so that the ship could become the backbone of the Sjøforsvaret Fleet. That's why FLOSK immediately began working on a series of proposals that ended up with changes in the following parts:

The power plant of the ship has been completely redesigned to suit the needs and requirements of the Sjøforsvaret and the new systems and elements of the ship. FLOSK chose to equip the ship with a mixed multi-gas turbine and fuel cell propulsion system (COFCAG) developed jointly by NAtech and Volvo Aero. Main fuel for which the system has been designed is hydrogen, but the system can also work with natural gas, methane and other gases, although with a lower energy efficiency. At low speed and during maneuvers the system uses the power delivered by the fuel cells, using the gas turbine system to achieve higher speeds. In addition, the system reuses the exhaust gases to supercharge the turbine and for the ship's heating systems, which considerably reduces the ship's thermal footprint. Power plant of the ship was designed taking into account the current needs of energy for propulsion and other systems on board, so it was possible to assume an increase in power required if new equipment or systems were installed in the future.

The propulsion system is fully electrical with four AZIPODs (ASEA azimut thrusters) mounted externally to the main hull. The electricity for the motors is supplied by the power system.

Fridtjof Nansen Class was the first one to integrate this propulsion system that would become the main system for all the new and retrofitted ships of the Sjøforsvaret.

The ships are named after famous Norwegian explorers. 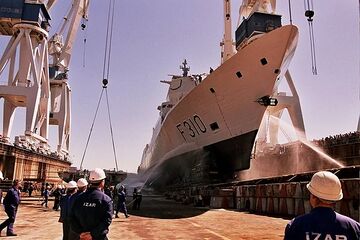 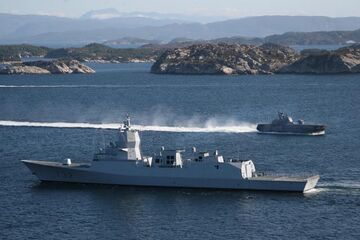 Retrieved from "https://wiki.conworlds.org/w/index.php?title=Fridtjof_Nansen_Class&oldid=34249"
Categories:
Cookies help us deliver our services. By using our services, you agree to our use of cookies.